WASHINGTON -- In the aftermath of Tuesday night's second presidential debate, observers are speculating over whether the stronger-perceived performance by President Barack Obama will produce a shift in the polls.

For the moment, the HuffPost Pollster tracking model, still based on public polls conducted before the debate, shows a razor-thin margin nationwide between Obama and Republican nominee Mitt Romney. Our estimate of the national popular vote currently shows a virtual tie, with just one-tenth of 1 percent separating the candidates as of this writing.

Polls have produced varying results at both the national and state level, but Obama continues to hold narrow but statistically meaningful leads in key battleground states such as Iowa, Ohio, Nevada and Wisconsin, according to our tracking model. 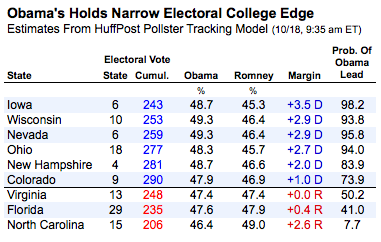 The various instant reaction polls were unanimous that pluralities of debate watchers chose Obama as the perceived winner. The real measure of success, however, is less about judgements of who "won" than whether the debate will help shift voter preferences.

On that score, the instant polls can offer only clues. For example, the CBS/GFK-Knowledge Networks survey -- which interviewed a nationally representative sample of 523 debate watchers who had been "uncommitted" before the debate -- indicated slight shifts favoring Obama. Though most of those sampled (52 percent) said they were totally undecided before the debate, slightly more who said they might change their minds leaned toward Romney rather than Obama (27 to 19 percent).

Both candidates gained support with the respondents during the debate, but Obama netted more, to lead narrowly (36 to 33 percent), with less than a third (29 percent) still saying they were totally undecided. 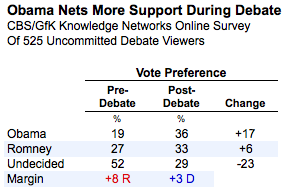 CBS News tells The Huffington Post that 19 percent of all voters interviewed before the debate by Knowledge Networks had met its definition of "uncommitted," and of these, 73 percent said they planned to watch the debate. A literal extrapolation would predict a 1- to 2-percentage shift to Obama among all voters, but this is just one survey, with a relatively small sample that only captured immediate reactions a few minutes after the debate.

The true impact will remain unclear until we have another round of post-debate polls completed nationally and in the battleground states. Until then, at least two theories have been floated about how the debate may or may not move the poll numbers:

Romney's gains will persist. One theory is that Romney's polling bounce is less about Obama losing the first debate than about Romney winning it. The debate may have created "a genuine shift in perceptions of Romney's character," as the New Republic's Nate Cohn puts it, pointing to "several polls showing Romney with improved favorability ratings after the first debate."

This theory is that Romney's performance helped reassure voters who disapprove of Obama, but had been sitting on the fence after months of attacks on Romney by the Obama campaign. As such, Cohn warns, "it wouldn't be wise to expect a big shift in the polls" following the second debate.

Or, as The National Journal's Ron Brownstein argues, "it's not clear that the president can 're-disqualify' Romney among voters reassured in the first encounter."

The second debate will burst a polling bubble. A second theory, outlined on Wednesday by The New York Times' Nate Silver, is that polls exaggerate the "bounces" from events like debates that could temporarily "affect voter enthusiasm and their willingness to respond to surveys."

By this theory, the Democratic convention and the release of the "47 percent" tape boosted Democratic enthusiasm and the first debate boosted Republican enthusiasm, and these changes affected the relative willingness of partisans on either side to respond to telephone surveys. "Perhaps," Silver speculates, "Mr. Obama's numbers went from being artificially inflated to artificially deflated, exaggerating the degree of change in the race on both ends."

Does any evidence back this theory?

First, setting aside the issue of poll response rates, it is clear that shifts in enthusiasm will make for big changes in the voters that qualify as "likely voters" on many surveys. In 2000, for example, Gallup's daily tracking survey showed Republican nominee George W. Bush going from a 9 percentage-point deficit against Democrat Al Gore to an 8-point lead in just three days following their first debate. A subsequent analysis by political scientists Bob Erikson, Costas Panagopolous and Chris Wlezien found that most of the shift was due to "changes in the composition of Gallup's likely voter pool."

Second, as Silver notes, telephone response rates are roughly 10 percent for the most rigorous surveys, and likely much lower for most others, so relatively small changes in the respective willingness in Democrats or Republicans to participate in surveys could easily impact their results.

Finally, as Silver argues, the recent round of online recontact surveys conducted by YouGov provide a unique test of the theory. YouGov fielded separate surveys in 25 states in mid-September and then attempted to reinterview the same respondents in each state after the first debate, between Oct. 4 and Oct. 11. Partly because all YouGov respondents come from a panel of individuals that agrees in advance to participate in surveys, the organization was able to recontact an average of 79 percent of respondents for its second wave of interviews. 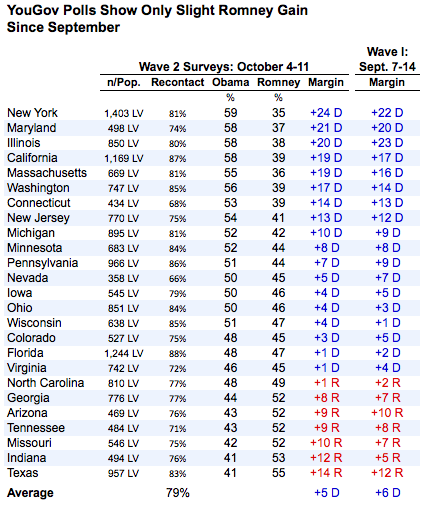 As Silver noted, the 25 polls show Obama leading in most of the key battleground states, and indicate very little decline for Obama since October. Silver speculated that YouGov's methodology, which "potentially reduces non-response bias," may explain why its surveys had shown less change.

In fact, as YouGov confirms for The Huffington Post, those who supported Obama on the first wave of interviews had been been slightly less likely to respond than those who supported Romney on YouGov's post-debate surveys. According to YouGov's Doug Rivers, its surveys would have shown net gains for Romney of roughly 5 percentage points had YouGov ignored these differing response rates and weighted its numbers by demographics alone. Once YouGov corrected for the non-response bias, however, it showed Romney gaining only about 1 percentage point, on average, across the 25 surveys.

How much the debate might affect where Obama and Romney stand in the polls may ultimately depend on whether the differing response rates observed by YouGov were a momentary anomaly or a measure of a "new normal," indicative of the coming turnout patterns. If it's the latter, the polls will likely remain close. If it's the former, get ready for another polling bounce.