Appearing on CNN's State of the Union program on Sunday, December 21, President Obama was defiant. "I'm going to be doing everything I can to close," the detention center at Guantanamo Bay, Obama flatly said to CNN's Candy Crowley. "It [Gitmo] is something that continues to inspire jihadists and extremists around the world, the fact that these folks are being held. It is contrary to our values."

Supporters of closing the Gitmo detention center, of course, have heard this type of talk from President Obama before. Whether during the 2007-2008 Democratic primaries, the November 2008 general election, or during his first six years as president of the United States, Obama has always depicted the Gitmo facility as a symbol of the George W. Bush years -- a period of time that the former constitutional law professor and Harvard law student has regarded as a divisive and needlessly provocative chapter in U.S. history. Locking up terrorist suspects in a U.S. prison run on foreign soil for years without the due process of law Americans expect from their government, was the epitome of that "war on terror" era.

Entering the seventh year of his presidency, there is every indication that Obama and his administration are preparing for the full-court press that anti-Gitmo advocates have long been waiting for. Guantanamo may be a relic of the Bush years, but the Obama White House is gearing up to make the closure of the detention facility a top line-item in 2015. As Paul Lewis, the Pentagon's Guantanamo envoy, told the Washington Post, "He does not want to leave this [Gitmo] to his successor."

If that's indeed his intention, then Obama will have to leverage the same executive authority that proved so critical to taking action on immigration, hashing out a climate accord with China, and rolling out a new U.S. policy on Cuba.

On Gitmo, Congress is the big elephant in the room that has kept the White House from shuttering a facility that has outlived its usefulness. For the past several years, Congress has prohibited any money from being spent to either construct prisons in the United States to house Guantanamo detainees or to transfer those prisoners to maximum security facilities in the United States. With those restrictions solidly in place -- the 2015 omnibus spending bill also requires the Secretary of State to send a written report to the Appropriations Committees on the terms of any transfer agreement with foreign countries -- the president and his national security team will need to get creative if they hope to meet the high expectations that they have set for themselves for the new year. Quickly moving on the list of prisoners who have been authorized for release is the quickest way to ensure that Gitmo does, in fact, become a part of the past. 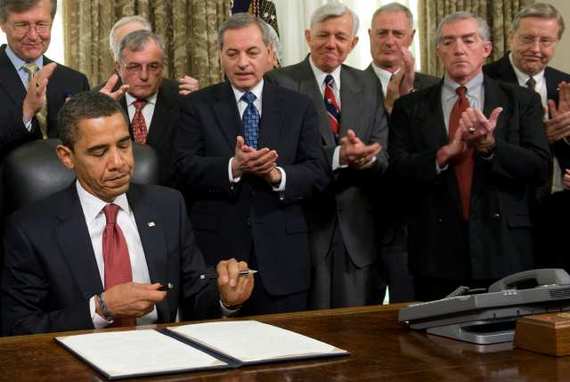 The question is not whether President Obama will try to fast-track detainee releases, but rather how he is going to frame the debate. The Wall Street Journal reports that, in a desperate bid to thin out the population at Guantanamo, the administration will begin to cast the prison as a waste of taxpayer money rather than a moral strain on America's compass. It could be a very good, practical argument to make, given Washington's obsession with trying to find a segment of the budget that can be cut in order to save money for future programs. This argument will also put Republican fiscal hawks in the uncomfortable position of defending the utility and effectiveness of a detention facility that costs hundreds of millions of dollars to keep open (roughly $2.7 million per prisoner).

President Obama may hope that Congress will begin to smarten up and loosen the restrictions that have kept Gitmo open, but the fact of the matter is that he is completely on his own. Obama will get no help from a Republican-led Congress that has consistently touted the Guantanamo prison as a critical enabler of America's counterterrorism efforts. This will mean far more aggressive action on the part of the White House, the Defense Department, and the State Department in the year ahead. Expect the State Department to ramp up negotiations with countries that are willing to house Gitmo prisoners who are cleared for release; expect the White House to constantly be in the Pentagon's ear on approving those transfers; and expect the National Security Council to use every loophole in its executive authority to decrease the prison's population.

Despite losing the Senate majority this past November, Obama has spent the last month and a half using his executive authority on the very same issues (immigration, climate change, Cuba) he wants resolved before his presidency ends. Congressional Republicans don't like it, and have condemned the president as an emperor who has discarded the entire concept of checks-and-balances and the U.S. Constitution. Righty or wrongly, Republicans will be even more upset in the months ahead, as the Obama administration makes 2015 the "year of action" on Guantanamo Bay.