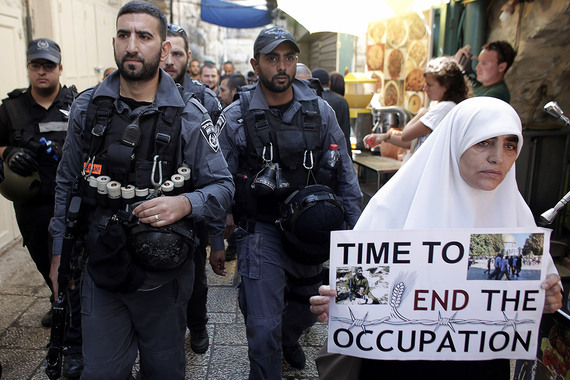 Israeli Prime Minister Benjamin Netanyahu's vindictive policies are creating a climate in which Palestinians are once again rising up to reject their lack of freedom and equality.

Netanyahu's meeting with President Barack Obama Monday involved obfuscation and a resort to blaming Palestinians for the current troubles rather than examining nearly 50 years of Israeli iron rule over Palestinians in the occupied West Bank and East Jerusalem. Putting the blame elsewhere is simply to ignore reality that subjugated peoples always rise up sooner or later - or repeatedly until they attain their freedom and rights.

In recent months, we have seen a number of hopeful signs that broader US foreign policy is shifting. The same must be done on Palestine. President Obama dramatically reversed course on Cuba after decades of US sanctions. Closer to Palestine, Obama managed to overcome nearly 40 years of antagonism with Iran with an unprecedented nuclear deal.

As a result, there is hope for rapprochement with Iran and a coordinated effort against the Islamic State group. Extremist factions opposed to the treaty - both in the US and Iran - threatened to undermine it, but the movement toward peace holds sway.

It is difficult to downplay the significance of the agreement for Obama's legacy - it is by far the greatest foreign policy achievement of his presidency - and the meaning for wider US involvement in the Middle East. President Obama was right to reject Netanyahu's advice and ham-fisted interventions on Iran and should continue to hold the line.

Until recently, Obama had followed his predecessors in dealing with Iran, continuing and enlarging existing economic sanctions. Although proponents claimed the sanctions targeted the regime, the reality was that Iranian civilians bore the brunt of the pain.

While those close to the regime used connections to evade sanctions and prosper, the majority suffered. Iran is an upper-middle class, well-educated society, but after four years of tightened US sanctions, poverty is widespread, many medicines are hard to find, and universities find themselves cut off from the rest of the world.

The Iranian government, afraid the sanctions would lead to invasion as they did in Iraq in 2003, rushed ahead with nuclear and military programs while crushing domestic political dissent. Squeezed by government repression and Western destruction of their economy, Iranians focused on getting meals on the table.

In the last two years, Obama has awakened to the failures of sanctions and threats of war. He has fought for diplomatic breakthroughs with Iran and a rollback of sanctions even against opposition from the Republicans and within his own party. His determination to reverse course indicates a realization that politics cannot be conducted without dialogue and reflects an emphasis on protecting human life. 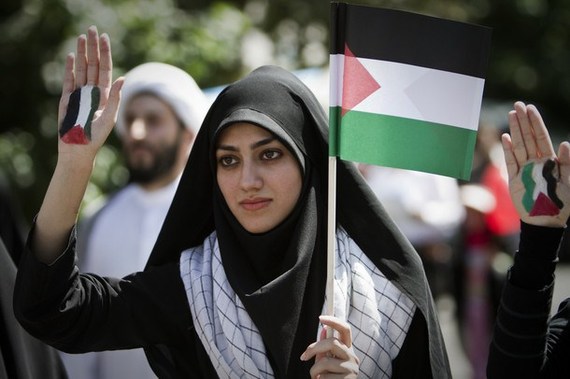 An Iranian woman protests in solidarity with Palestine at a 2012 rally. (AFP/Behrouz Mehri)
Obama's bold new policies must be emulated when it comes to Palestine. For too long, the Palestinian people have suffered under a US-funded Israeli occupation, and their plight has undermined US claims it is upholding freedom, human rights, and democracy around the world.

Two decades after the Oslo agreements, another generation of Palestinians has grown up under occupation, and Israeli officials have clearly stated they don't intend to change the status quo. Quite simply, the "peace process" is today seen by Palestinians as a farce used by Israel to protect its image while continuing to extend its control.

Policymakers must consider alternatives to the two-state solution. Many activists on both sides are calling for a single democratic state. Noting that both Israelis and Palestinians currently live under one system - but one that many have deemed "apartheid," privileging Israeli Jews over all others - many are now calling for equal citizenship in a united country. Solutions like these that take geographic and political realities on the ground into account must be considered.

By ending the $3 billion in yearly US aid to Israel and launching an open-ended dialogue regarding other possibilities for peace beyond the failed "peace process," Obama could make a lasting legacy in this tiny corner of the world where too many others have failed.

Given the opposition of the Israeli government and AIPAC, grappling with Palestinian freedom is likely to be postponed. That policy of delay, adhered to by both Israel and the US, looks short-sighted as the situation deteriorates sharply yet again.

Until an American president pushes Israel hard for progress on a fair settlement, we will see again and again precisely the sort of grim developments now gripping Israelis and Palestinians alike.

In his recent meeting with Netanyahu, President Obama bowed to pressure from pro-Israel sentiment in his own party as well as among the Republicans. But in his last year in his office, it is imperative that Obama use his platform to speak tough truths to Israel.

Otherwise, we will see the current violent chaos play out time and again as Israel cracks down ruthlessly on a Palestinian people who simply want the same rights and freedoms as people elsewhere around the world.