Under attack by some conservatives for speaking out against the "captains of the religious right" in his Easter sermon, the Rev. Luis León, pastor of the Episcopal church the Obama family attended for the holiday, told The Huffington Post on Monday that he stands by his words.

"It's in there. People will do what they want with it," said Leon, referring to the sermon in which he said it drives him "crazy when the captains of the religious right are always calling us back ... for blacks to be back in the back of the bus ... for women to be back in the kitchen ... for immigrants to be back on their side of the border."

The words, spoken as he instructed congregants to follow the advice of Jesus telling Mary Magdalene not to cling to him after he returned to life after death, came as Leon said Christians need to remember that "God address us in the now." In the sermon, he linked the story to what he described as conservatives grasping onto outdated views on race, gender roles and immigration.

"It’s sad when clergy egregiously politicize worship," Mark Tooley, president of the conservative Christian organization Institute on Religion and Democracy, wrote in one of several blogs and articles that have criticized the sermon. "Is this characterization of religious conservatives as racists, chauvinists and bigots really fair and accurate? And if political critique of religious conservatives were appropriate in an Easter sermon, couldn’t León offer a thoughtful analysis rather than snide smugness?"

"I'm a bit surprised to hear a pastor use an Easter sermon to attack anyone, when the focus should be on Jesus and his resurrection -- the act that we believe defeats death and eventually brings all together," said the Rev. Ed Stetzer, a Southern Baptist minister and president of LifeWay Research, in an email. "Yet, we all know that there are lots of dumb things said by a lot of religious leaders, right and left."

Following his words on the religious right, León's sermon emphasized that the "the message of Easter is about the power of love over loveless power." He said that the "Easter vision" will allow Christians to see the world differently and that there "is no injustice so insidious that there can be no truth ... no war so deep that there can be no peace ... no enemy so bitter that they can't become a friend."

León's church is across the street from the White House in Washington and is the one the Obama family most frequently attends. León said Monday that he had not heard of the controversy because he had "not read the newspapers or watched TV." He said "the takeaway (of the sermon) was about the Easter vision ... that was thrust of it. That was it." He added that the full audio of the sermon -- only excerpts have been released so far via a White House pool report -- should be posted on the church website on Tuesday.

A person who who attended the church service told The Huffington Post there was no audible approval or disapproval from members of the congregation when León made his remarks about the religious right.

This is not the first time León, who also presided over services that President George W. Bush's family often attended, has been part of a controversy. In January, León, whose denomination ordains openly gay clergy, was tapped to replace the Rev. Louie Giglio, an Atlanta pastor accused of being anti-gay, at Obama's inauguration.

Giglio, of Passion City Church, had been scheduled to deliver the benediction at the inaugural ceremony, but dropped out after old remarks of him speaking against the "aggressive agenda" of the gay community and saying gay people could change through"through the healing power of Jesus" were reported in the media. At that time, a spokeswoman for the Presidential Inaugural Committee said that instead of Giglio, it wanted a pastor who reflected "inclusion and acceptance for all Americans" to deliver prayers. 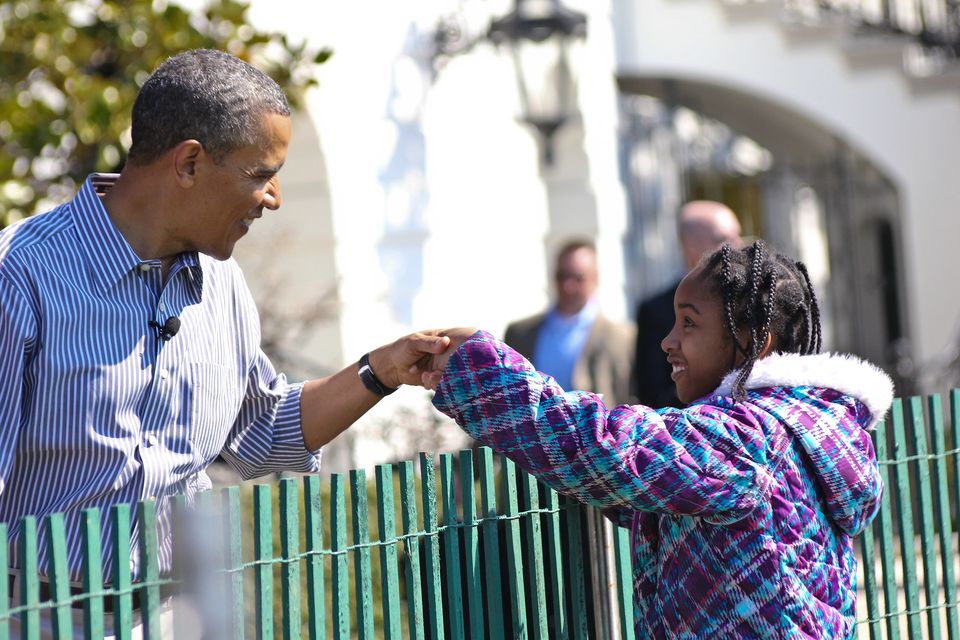 1 / 49
US President Barack Obama fist bumps a young admirer on the South Lawn of the White House in Washington, DC, April 1, 2013 at the White House Easter Egg Roll.
Armando Gallardo