Tuesday night was a historic night in American politics, one in which Barack Obama emerged as a pioneer on the American stage, forever changing the way national public figures are perceived. Yes, fine, it's because he's the first African-American nominee for President of the United States, but it's also because of the path-forging, assumption-shaking gesture he shared publicly with his wife, Michelle Obama: The Fist Bump.

The Washington Post's "Reliable Source" called it "the fist bump heard 'round the world," and it certainly seemed that way, instantly drawing commentary and analysis (and will probably provide fodder for same going forward, particularly for those looking to decode Michelle Obama and the kind of influence she'll have over her husband. She did initiate the bump, after all.) So captivating was that bump — captured from every angle, and shown repeatedly since then from same — that not much mind was given to the affectionate pat Obama followed up with as his wife left the stage, which ETP earlier called an "ass-pat" but which closer scrutiny reveals hit in that demure place on where lower back meets buttock. Aw. 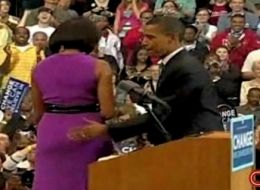 Lest you doubt, in this historic week "The Obama Pound," a web-only video by Mara Schiavocampo, has become one of the week's most popular videos on MSNBC, as has a CNN examination by Jeanne Moos ("He's clinched the nomination and now he's clenching his fist! All out of love, of course"). From CNN we learn that the term of art for the gesture in question is "dap"; from MNSBC, courtesy of pop culture blogger Patrick Riley, pop culture blogger that it was "the best moment in romantic politics since Al and Tipper - it had that kind of romantic, supportive, black love appeal...Powerful." (Oh, come on, Patrick! It was totally romantic when Cindy McCain stood by her man after that NYT story came out.)

As for Obama, he told Brian Williams (who called it "the most talked-about fist pound on the internet today") that it "captured what I love about my wife — there's an irreverence about her and sense that for all the hoopla, that I'm her husband and sometimes we'll do silly things." Whether a fist-bump is "silly" is a matter of opinion — apparently it "thrilled a lot of black folks," according to blogger Ta-Nehisi Coates in the Washington Post, as well as on his own blog ("Obama's so black....he gave his wife dap before his speech. Incredible. I really wonder how many white viewers caught that. It's probably a generation thing. I bet a lot of younger folks got it"). (He also says that, yes, it is black, even if it's a gesture that has gone mainstream.) Either way, it was hailed also by viewers happy to see that kind of genuine, affectionate moment between the nation's fastest-rising power couple — rather than the aforementioned stand-by-her-man moment, which is all-too-familiar a political tableau. Nice to see.

By the way, the reason I posted the MSNBC video and not the CNN video — which I actually saw first — is because the MSNBC video is embeddable. Get on that, CNN. Here's the link to it, though. Worth watching. Jeanne Moos is fun. So, apparently, are the Obamas. Bodes well for a rockin' inauguration!

The Fist Couple: Giving a Big Bump to Authenticity [WaPo]
The History of the Fist Bump [Time]
The sacred art of giving dap [Ta-Nehisi.com]

Update: Mea culpa - Ta-Nehisi Coates is totally a dude. I got fooled by his Feministing links. Election '08 busts my assumptions yet again.