A caricature of President Obama is the face behind a Beijing chicken restaurant, Shanghaiist points out.

The New York Post reports that the slogan on the sign featuring Obama's head on Colonel Sanders' body can be translated as, “We’re so cool, aren’t we?"

Rev. Al Sharpton told The Post that the sign is "insulting, offensive and plays to racial stereotypes.”

The Washington Post's BlogPost contacted a KFC China spokesperson, who said the company is not pleased with the Obama Fried Chicken logo.

“We’re considering legal action as it is a knock-off and has nothing to do with us and it infringes on our brand trademark,” the spokesperson said in a statement. “We find it distasteful.”

But the Atlanta Journal Constitution points out that a KFC China ad also used an Obama lookalike in a television commercial that ran in Hong Kong.

Obama Fried Chicken is not the first poultry restaurant to use Obama's name, either. The New York Post notes that there's an Obama's Fried Chicken in Harlem.

WATCH the KFC China commercial and see the OFC image below: 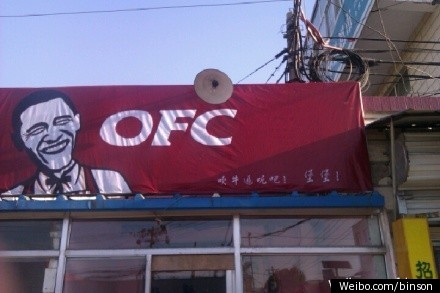