The emerging narrative in political circles is that the White House has a deficit problem. Glenn Beck, over at Fox News, insists that Obama is "spending us into oblivion." Politico called the recent round of job-stimulus appropriations a "spending binge." Sen. Judd Gregg (R-N.H.) deemed this an era of "fiscal recklessness and irresponsibility," the extent of which is "shocking to the American taxpayer."

The drumbeat is loud enough to put Democrats on notice. The president has increasingly discussed the need to get the deficit under control in recent speeches. And in Congress, a proposal to set up a bipartisan commission to force deficit reduction is gaining steam among the party's more conservative members.

All of which may be vital, say budget analysts say. But the hysteria over the deficit misses a fundamental point: the country's fiscal problems largely aren't due to Obama but rather his predecessor.

A forthcoming study by the Center on Budget and Policy Priorities concludes that the $1.4 trillion annual deficit run by the government has little to do with current White House policies and much to do with George W. Bush's actions.

"What we have looked at were several major contributors to the deficit: the tax cuts between 2001 and 2003 (on the assumption they get extended in 2010), the cost of the wars in Iraq and Afghanistan and the effects of the recession as well as the legislative response to the recession," James Horney, director of federal fiscal policy at the Center, told the Huffington Post. "When you take those things into account -- in other words, if we hadn't enacted the tax cuts, had the wars, if we hadn't had the recession and needed the legislation to deal with those problems -- the deficits are much, much lower. And basically none of those represent Obama's policies. He didn't run saying he wanted to pass a stimulus to deal with the recession or that he wanted to continue the war in Iraq or escalate [to this extent] in Afghanistan. He inherited these issues once he took office."

"It's true that spending in 2009 was much higher than it was the previous fiscal year, by about $602 billion, excluding payments on the national debt (which actually declined in 2009 because of low interest rates)," wrote Michael Linden, an associate director for tax and budget policy at the Center. "But it turns out that a huge chunk of that increase actually happened before President Obama took office. In fact, fully 41 percent, or $245 billion, came in the form of the Troubled Asset Relief Program and the rescues of Fannie Mae and Freddie Mac, actions taken in the fall of 2008 under President George W. Bush. 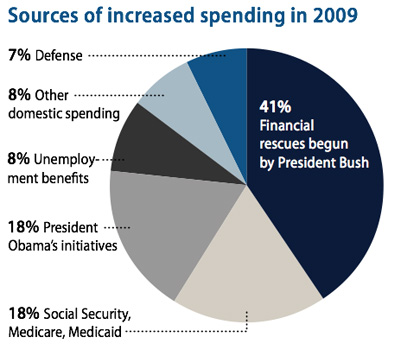 As for the deficit that conservatives decried, Linden concluded that it was the recession, not Obama, that was to blame. In 2009, federal tax receipts were $419 billion below 2008 levels -- the largest decline from one year to the next in seven decades. "The overall cost of the decline in tax revenues was four times larger than the cost of Obama's initiatives," wrote Linden.

The decline of tax revenues due to the recession may not be a development tied to Obama. But it has become a perplexing problem for this administration.

The White House has raised spending levels by roughly $600 billion in FY2009 -- almost exclusively through temporary programs such as the stimulus -- in order to spur economic growth and increase that revenue base. But spending money to make money can be a costly venture in the short run, especially as the recession is prolonged. Unemployment benefits that used to expire after six months, for instance, have been extended by Congress at a heavy but morally defensible cost. And even when GDP rises, the government is still operating off a largely reduced revenue stream, complicating its efforts to pass pieces of domestic legislation.