"Of course, we're thrilled. But we want to make sure that this isn’t just a promise, but that it is implemented. We're not going to stop fighting until this actually becomes a reality," said Amador, a project coordinator for the UCLA DREAM Resource Center.

Jonathan Perez, a 24-year-old who is Dream Act-eligible and a member of the National Immigrant Youth Alliance (NIYA), expressed the same reservation to The Huffington Post. "A lot of organizations are celebrating, which I think is premature because if they had time to read what this policy is, it's very similar to what we've seen in the past."

"There's no details about how this would be enforced. It's not a law. We've seen how badly prosecutorial discretion has worked."

Perez said that because Immigration and Customs Enforcement (ICE) has a deportation quota (in 2010, it was 400,000), it doesn't follow memos and announcements saying youth and people without criminal records should be de-prioritized. As proof, Perez pointed to more than 70 cases of Dream Act-eligible youth now in deportation proceedings that he said NIYA is trying to halt.

"What we want is an executive order, which is well within Obama's power, saying he will stop the deportation of Dream Act-eligible youth," Perez said.

NIYA and United We Dream, a national campaign for the Dream Act, have been staging sit-ins since last week at Obama campaign headquarters in Denver, Los Angeles, Oakland, Atlanta, Charlotte, Cincinnati and Detroit [see photos below]. Perez thinks Obama's announcement may have been in reaction to these protests.

"It's like Obama is trying to pacify the youth that are sitting inside his offices. And also it's an election year, and he's trying to get voters in our community," he said.

Still many activists were celebrating the president's announcement in downtown Los Angeles.

"Everybody was just really happy, emotional to say the least. Folks worked so hard and it was great to hear some positive news," Erick Huerta, 27, who is Dream Act-eligible, said Friday. "Every day we hear negative news about things getting worse in Arizona, or another family or friend getting deported. It really uplifted everybody's spirits."

Amador and Perez said immigration groups in Los Angeles and across the country will now work together to reach out and educate communities about the new work-permit application process.

Click through photos of Angelenos celebrating Obama's announcement, of recent sit-ins at Obama headquarters and of California "Dreamers": 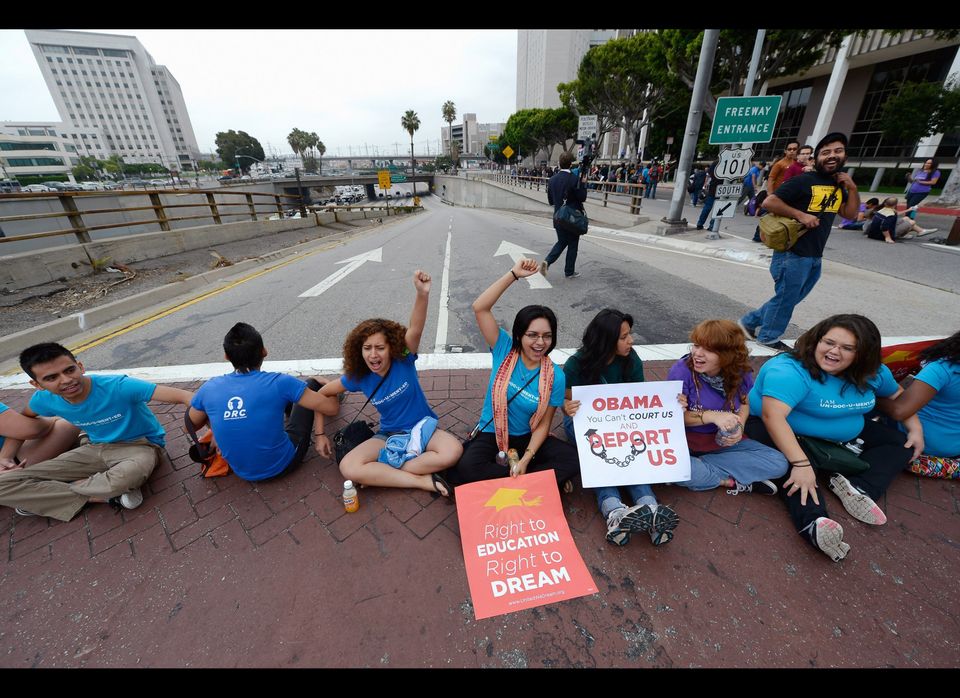 1 / 26
Immigration Activists Demonstrate In Los Angeles
LOS ANGELES, CA - JUNE 15: Students block a on ramp to the US101 during a demonstration by immigrant students for an end to deportations and urge relief by governmental agencies for those in deportation proceedings on June 15, 2012 in Los Angeles, California. In a policy change, the Obama administration said it will stop deporting young illegal immigrants who entered the United States as children if they meet certain requirements. (Photo by Kevork Djansezian/Getty Images)
Getty