WASHINGTON -- It should come as no surprise to anyone that most Republicans aren't members of the Barack Obama fan club. According to one recent survey, a significant majority of Republicans in one state not only dislike the president but want to see him impeached. As a new HuffPost/YouGov national poll shows, however, questions about impeachment are a tricky business, and simply asking whether people support or oppose it may produce results that overstate their support.

But that relatively straightforward question leaves open several possibilities for interpreting what respondents meant when they said they favor impeachment. For example, the question contained no definition of impeachment, so that some respondents may have misunderstood what impeachment entails, even if they grasped that it functions as some kind of reprimand. Some respondents could have been just expressing an unfavorable opinion of Obama (virtually all Republicans rate him unfavorably) or endorsing a more generic reprimand, rather than advocating a process that could remove the president from office after trial for "high crimes and misdemeanors."

To help better parse levels of support for impeaching the president, The Huffington Post and its polling partner YouGov conducted a survey experiment to see how question wording might affect that support. Between Jan. 30 and Feb. 2, a total of 3,000 respondents nationally were randomly assigned to answer one of three questions about impeaching the president, including the original question asked by PPP and two alternative questions.

The results showed both that a simple support/oppose question may overstate the number favoring impeachment and that support for impeachment remains surprisingly high among Republicans even when they are asked a more explanatory question.

One set of respondents answered the same question that was asked on the PPP poll. Similar results were found nationally to those that PPP found in Texas, particularly among Republicans. In the new survey, 35 percent of Americans overall and 66 percent of Republicans said they would support impeaching Obama. 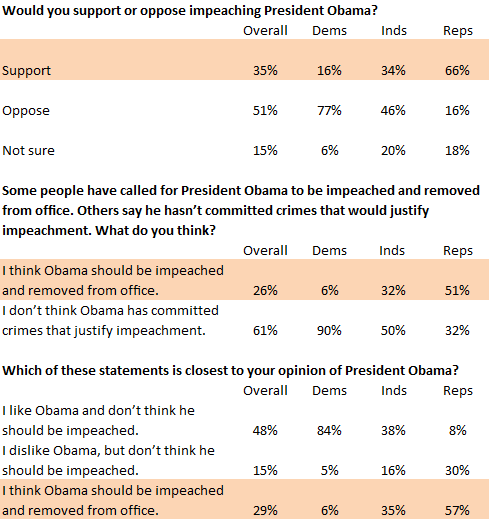 The lowest support for impeachment, both among respondents overall and among Republicans specifically, came from the first alternative question, which made clear both that impeachment is a process to remove a president from office and that it is spurred by crimes committed by the president, rather than a more general reprimand or distaste for his policies. Even so, one-quarter of respondents and half of Republican respondents persisted in saying that Obama should be impeached and removed from office.

And those asked the second alternative question, which did not mention crimes but did ask if Obama should be "impeached and removed from office" and also gave respondents the option of expressing dislike of the president without calling for his impeachment, found a slightly higher 29 percent of respondents overall and 57 percent of Republicans would support impeachment.

The results of these polls, both on the state level and nationally, reflect the extreme dislike for Obama among Republicans. A recent YouGov/Economist poll found that nearly three-quarters of Republicans strongly disapprove of the job that the president is doing. Moreover, the desire to impeach a president of an opposing party isn't limited to Republicans: For example, a Time magazine poll conducted in November 2006 (and accessed through the Roper Center's iPoll database) found that 48 percent of Democrats were then in favor of impeaching George W. Bush, while an equal number were opposed.

More than anything, surveys finding support for impeachment show just how divided Americans are today along party lines and how strongly rank-and-file members of each party dislike presidents from the opposing party.

The HuffPost/YouGov poll was conducted Jan. 30-Feb. 2 among 3,000 U.S. adults, of whom 1,000 were randomly assigned to answer each question (no respondent was shown more than one of the questions). The poll used a sample selected from YouGov's opt-in online panel to match the demographics and other characteristics of the adult U.S. population. Factors considered include age, race, gender, education, employment, income, marital status, number of children, voter registration, time and location of Internet access, interest in politics, religion and church attendance.