Even before the star arrives the event feels more like a rock concert than a speech. With people milling around sipping beer and two opening bands warming up the crowd the atmosphere is happy and relaxed. 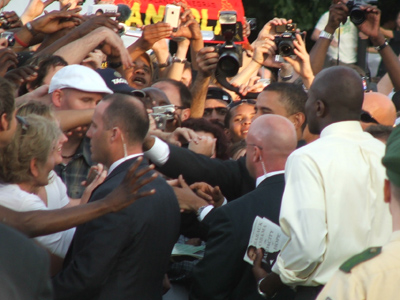 Ironically, the bag-strapped legions of press, of which your correspondent is a bewildered member, are separated from the rest of the crowd by ... a wall. With the day getting hotter and hotter and limited space for movement, there is little for the reporters to do in the hours before Obama's speech but to loll around and try to interview people across the fence.

In the shade of a tent set up for the bigwigs of the traveling press corps I run into Lucas, a 21 year old German volunteer who is enjoying a sausage and a smoke.

He discovered Obama while visiting Iowa last summer, before his energizing win in the caucuses. "It's amazing how he can motivate people", he says. "If Merkel were speaking no one would be here."

"He's like a mixture between a politician and a spiritual leader", he adds.

I hunker down for some food next to a photographer from the Bild tabloid (Germany's New York Post) who says he'd be happy if Obama won but doesn't think rural America will vote for a black man. A TV cameraman sits down next to us with a piece of cake and complains that we're not allowed eating utensils because someone could get stabbed with a plastic fork. 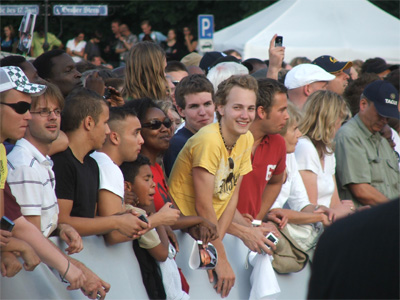 As it gets within a half-hour of the speech, anticipation starts to build.

I notice a reporter from Politico. She has a shiny laminate press badge, which makes me slightly jealous. Mine is paper and already has a slight tear.

A man in an off-white suit approaches the podium and situates a bottle of water -- clearly an important signal.

The crowd gets very quiet.

People look around breathlessly, wondering where Obama will appear.

A dark helicopter hovers in place high above the Victory Column. Will he be arriving by parachute? 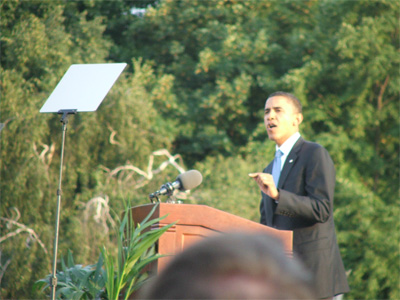 After a few long minutes the tension fades and the crowd begins to mutter. "Come oooon", groans a girl next to me.

And suddenly he's there.

Stepping down the bright blue catwalk with his long hand in the air and a smile on his face is the man of the hour, or at least of the next 27 minutes.

The speech is a brisk, affecting affair. There are big cheers when Obama talks about nuclear disarmament and dealing with climate change, while the crowd's response to "defeating terror" is noticeably muted, either because it's vocabulary clearly meant for the viewers in the United States or because of its implications for German troop commitments in Afghanistan, which the senator goes on to talk about. For the most part, however, he hits all the right notes.

Later, when the crowd begins to disperse I notice a scattering of individuals who didn't come to cheer: a few people with a sign protesting the death penalty, a woman wearing a "Troops out of Afghanistan" t-shirt and, of course, the guy with the McCain umbrella.

Nevertheless it's basically a love-fest, with occasional shouts of "I love you Obama!" from people near the front of the crowd. When Obama acknowledges that he doesn't look like the previous American presidents who have spoken in Berlin, a woman behind me murmurs "Better." It makes sense though, among an estimated 215,000 attendees, many of who are Americans, that those who waited hours to get near the podium would be of a particularly dedicated sort. 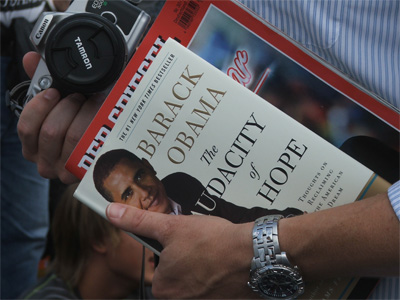 The cheering is energetic but not raucous. Even so, when Obama leaves the stage and descends for some face-time with the mortals, polite admiration transforms into wild enthusiasm. In fact, a stage-dive wouldn't have been out of place. As he reaches into the crowd people surge forward, yelling and jostling each other for the chance to photograph and touch him.

I talk to David, a former airman from Philadelphia who now lives in Europe. He's made the 600 kilometer trip from Munich to see Obama speak and wears a t-shirt that reads "The World for Obama 08'". 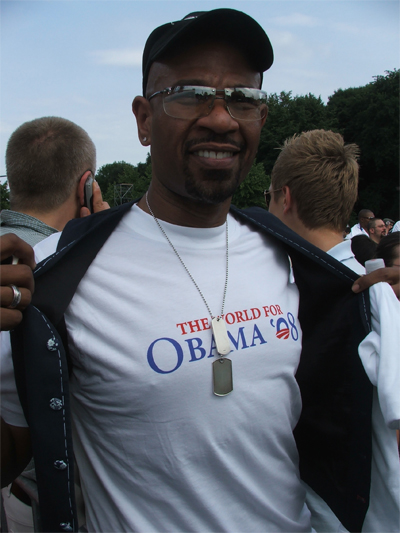 Why does he think people in Europe are so worked up by the whole Obama thing?

"Because they all witnessed the whole Bush thing."

At a time when everyone is looking for something different, Obama emerges as the most contrasting choice. If Bush is oil, Obama is solar power. His charisma, his aura, are remarked on again and again by those I speak with, as is his ability to inspire. To his supporters Obama isn't just an agent of change - he's the 007 of change - strong, cool-headed, charming and capable - a leader, in other words.

After eight years of bridge-burning, arrogance and cultural illiteracy from the White House, people see Obama, and what they see is as straightforwardly and emblematically different as it gets. They see someone intelligent, internationalist and inspirational. They see someone different. The fact that he is, literally, a politician of a different color, only adds to the power of that impression.