WASHINGTON -- On June 3, 2008, Barack Obama, then a senator from Illinois, secured the necessary delegates to become the Democratic nominee for president. The next day, he spoke before the American Israel Public Affairs Committee, a pro-Israel lobby.

For the presumptive nominee, the stakes were high. Not only was this the informal launch of the general election, but it was taking place before a hall of skeptics. Addressing the crowd, Obama remained unbowed on the position they found most indefensible: a promise to talk to the nation's adversaries without preconditions.

"I have no interest in sitting down with our adversaries just for the sake of talking," he explained. "But as president of the United States, I would be willing to lead tough and principled diplomacy with the appropriate Iranian leader at a time and place of my choosing -- if, and only if, it can advance the interests of the United States."

Obama's speech to the 2008 AIPAC conference the day after he became the presumptive Democratic nominee.

On Tuesday morning, seven years after that address, the logical endpoint of the worldview Obama outlined at AIPAC was achieved. Speaking from the White House at 7 a.m., Obama announced the conclusion of nuclear negotiations, in which Iran agreed to dramatically downsize its nuclear infrastructure in exchange for sweeping sanctions relief from the U.S. and the international community. Once the deal is implemented, Iran will have slashed the number of centrifuges it spins and disposed of the bulk of its stockpile of uranium, which can be enriched to use as fuel for a bomb. It will also be bound to intrusive inspections by the UN and subject to the reimposition of sanctions if it is found to be reneging on its commitments under the deal. 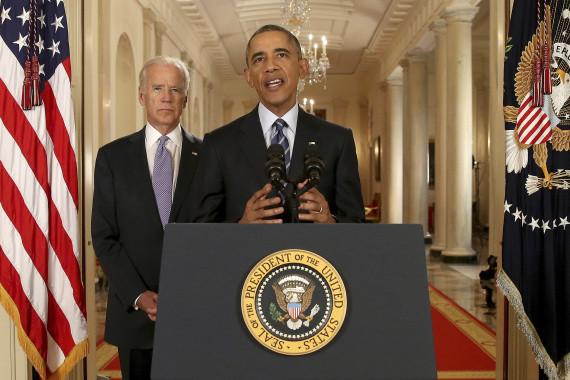 The agreement was the conclusion of 20 months of negotiations between Iran, the U.S. and five world powers with vastly divergent foreign policies. Its supporters hailed it as a historic breakthrough of international diplomacy, a defining moment in nuclear non-proliferation, and the start of a potential sea change in Middle East politics.

“I can’t think of another agreement that was this important, that took this much detailed scientific, political and even economic analysis, between seven countries -- all with different agendas -- working together,” said William Luers, veteran diplomat and current head of the Iran Project.

For better or worse, it was also the moment that will cement Obama's foreign policy legacy.

"The president has staked his reputation on this foolish errand, and I predicted all along that they would cave in to whatever it was in the end. ... Over time, history will judge it very harshly," said Sen. John McCain (R-Ariz.), who hammered Obama for his foreign policy naivety during the campaign in 2008 and who, during that election, infamously sang to the tune of "that old Beach Boys song," "Bomb bomb bomb, bomb bomb Iran."

That reaction was one end of the spectrum. On the other end were many of McCain's counterparts on the Democratic side of the aisle.

"This is a president who’s very experienced … and I think has really come into his own and is taking some very strong steps forward," said Sen. Dianne Feinstein (D-Calif.). "And I think the American people by and large appreciate that. His numbers are going up, and I say all the more power to him."

Obama's precise legacy will remain a point of debate long after McCain and Feinstein are out of office. But on the whole, foreign policy observers, lawmakers and former Obama administration officials see Obama's record right now as one of nuanced risk management and a gradual reluctance to use military resources to manage said risk. Its origins date back to that campaign pledge in 2008.

"If he had two main themes during the campaign, to put it simplistically, it was 'We aren’t going to get stuck in stupid wars' and that we are going to engage our adversaries in diplomacy," said Brian Katulis, a senior fellow at the Center for American Progress. "He has more or less done both, and this Iran deal comes at the end of a prolonged diplomatic process with Iran but after a string of engagement with other countries."

It hasn't been always coherent, however.

When Obama first declared he'd negotiate with adversaries, it was by accident -- an unprompted declaration during a Democratic primary debate -- and it set his campaign into a minor tailspin. "We did not expect him to say that," former Obama spokesman Bill Burton told The Huffington Post of that debate moment. "We were like, 'Oh my God. How do we walk it back? [Former Secretary of State] Madeline Albright’s attacking us!'"

For Obama, however, it quickly became a proud selling point, and one he wasn't particularly interested in cleaning up. "If we are actually going to pick the lock on this deal, we might have to talk to them," Burton recalled him as saying in a conversation with his aides the next morning.

After just two months in office, Obama took the unconventional step of sending Iranians a holiday message on Nowruz, the Iranian new year. “For nearly three decades, relations between our nations have been strained," he said. "But on this holiday, we are reminded of the common humanity that binds us together.” Shifting his focus from the Iranian people to the Iranian leadership, Obama looked into the camera: “My administration is now committed to diplomacy that addresses the full range of issues before us.”

Ultimately, the timing wasn’t right. Iran’s political leadership was more focused on quelling political dissent at home than engaging with foes abroad. Even so, it was the first time since the dissolution of U.S.-Iranian relations that an American leader publicly extended the offer of rapprochement.

“We managed to convince the world,” said Ilan Goldenberg, who worked on Iran at the Pentagon between 2009 and 2012. “Up until that point it was, ‘Is Iran being obstinate, or is it the U.S.?’ Obama was able to demonstrate that we were open and negotiating in good faith. Which, in turn, allowed us to build up support for the sanctions regime,” he added, referring to the eventual coalition of nations that agreed to sanction Iran -- including reluctant countries like Russia and China.

But the Obama foreign policy portfolio was always more robust than just a pledge to negotiate with enemies. And even as he was reaching out to Iran, Obama’s instincts seemed to guide him away from the very positioning that defined his campaign. As Dr. Edward Levine, who spent over 30 years as a staffer on the foreign relations and intelligence committee in the Senate, put it: “Engagement is one tool in the toolbox.”

“I think the president came in wanting to stress that, in part, because it seemed that his predecessor had not,” Levine added.

When he won the Nobel Peace Prize shortly after taking office, Obama gave a speech that, to the surprise of many, served as a defense of war. On one of his first major decisions, he authorized a major escalation of U.S. troops in Afghanistan, to the gratification of his military advisers. Drone operations expanded dramatically, in both frequency and geographic scope. And in 2011 he signed off on U.S. airstrikes in Libya to both prevent a humanitarian slaughter and to expedite the ouster of Col. Muammar Gaddafi. 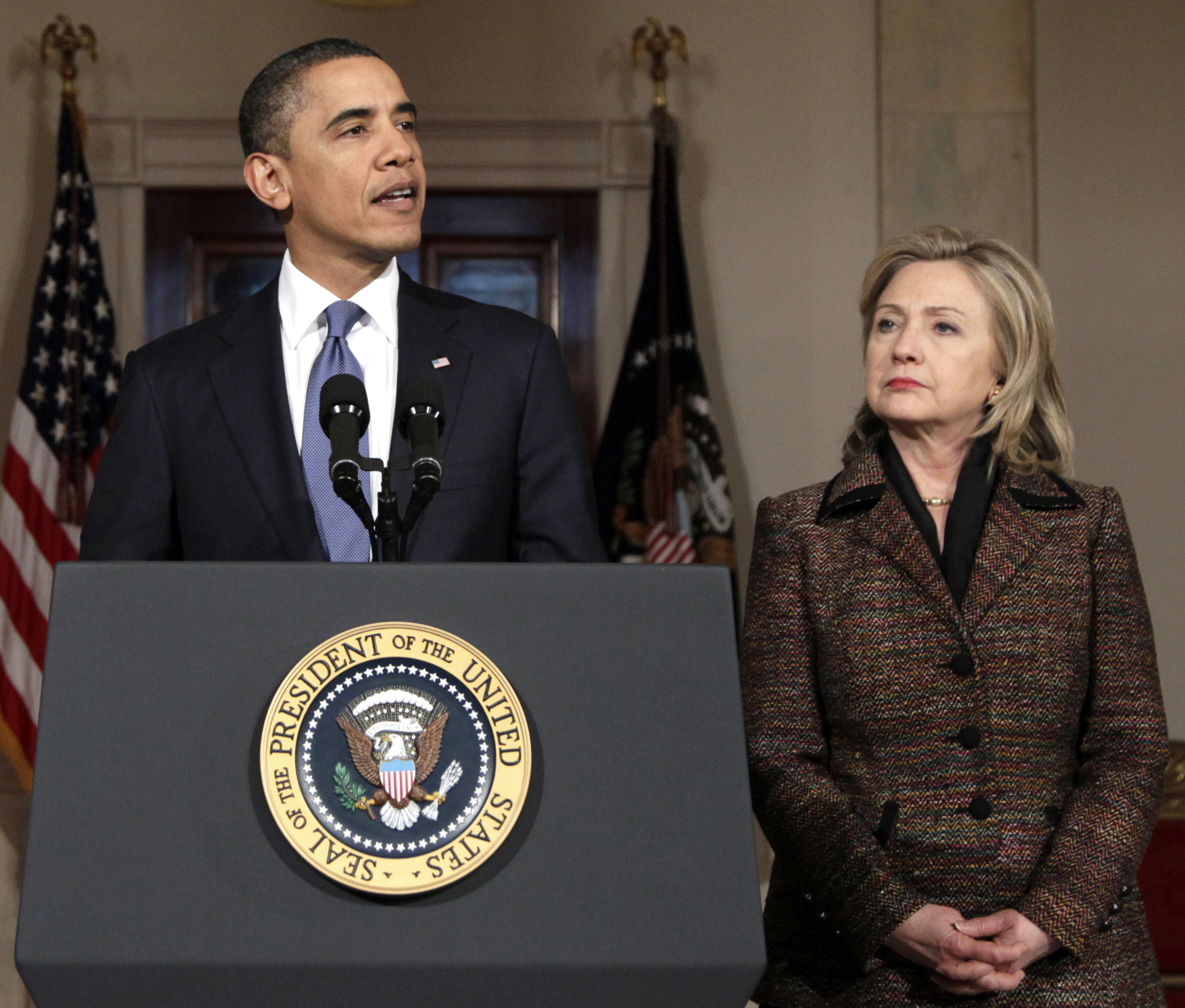 According to advisers, it was the latter decision, more than the others, that prompted rethinking within the administration about overall foreign policy strategy. The ease of the intervention was eclipsed only by the messiness of the aftermath. And soon enough, the voices of those inside the administration advocating for caution, multilateralism and "retrenchment" -- to borrow the phrasing of critics -- were ascendent.

"You had different schools of thought in the administration," said Richard Haass, president of the Council on Foreign Relations. "You've had humanitarian interventionism, which got you to do more in Afghanistan initially, and more in Libya. And then you had the retrenchment mentality, which led you to not follow up in Libya, to have these calendar-based withdrawals rather than condition-based withdrawals from places like Iraq and Afghanistan. So I think there's been competing impulses. You articulate a pivot to Asia but you don't do a whole lot to make it real. So I just think there is all along then a kind of duality to the foreign policy."

The last two years of the Obama administration have brought into bright view the upsides, difficulties and associated problems with a foreign policy that, as Katulis defines it, "gets others to pull their weight."

In Iraq, even as the Islamic State stunned the public with its seemingly effortless seizure of territory, the White House resisted calls for a larger U.S. military footprint, largely on grounds it would invite other regional actors and the Iraqi government to offload their responsibilities. The same, roughly, has held true in Ukraine, where the administration has chosen to focus more on developing a comprehensive sanctions regime against Russia than on providing heavy military equipment to the Ukrainian forces fighting separatist rebels.

In Cuba, meanwhile, the very act of engaging adversaries prompted the reopening of diplomatic relations and the gradual ending of a 50-year-long embargo. In China, direct talks resulted in a historic climate agreement. Iran, however, is the coup de grace.

I would. And the reason is this, that the notion that somehow not talking to countries is punishment to them -- which has been the guiding diplomatic principle of this administration -- is ridiculous.
Obama during a 2007 presidential debate, when asked if he would negotiate with adversaries as president

During the most recent 17-day-long negotiating session, Obama insisted on speaking with Secretary of State John Kerry at all times, according to senior administration officials. Throughout the past several weeks, rundowns of the progress made by nuclear negotiators in Vienna, Austria, took up the bulk of the president’s daily morning briefings. And when his national security team told him negotiators had reached an agreement on Monday afternoon, he immediately phoned Kerry, insisting on confirming the good news directly from his point person. Obama then spent Monday night drafting his announcement of the historic nuclear agreement with Iran.

“Today, after two years of negotiations, the United States, together with our international partners, has achieved something that decades of animosity has not -- a comprehensive, long-term deal with Iran that will prevent it from obtaining a nuclear weapon,” Obama declared in his announcement of an agreement the next morning.

Like prior decisions, the deal is ultimately based on the weighing of risks -- in this case, those associated with managing and shaving down Iran's nuclear ambitions. And as the White House now goes about selling the final product, it rests its case on the notion that the alternatives are far riskier. This calculus placed Obama in the minority among national politicians when he first made the case in 2007. He could still end up there in 2015.

"Obama's legacy here will not be whether he got an agreement," Sen. Chris Coons (D-Del.) told The Huffington Post. "He's got an agreement. His legacy will be whether five or 10 or 15 years from now it is an enduring agreement that actually succeeds in blocking Iran's efforts to get a nuclear weapon."

With reporting by Dayana Morales Gomez and Igor Bobic.