Have you heard that people want President Barack Obama to call Congress back from its August recess, as if he were some sort of king or something? See, the S&P downgraded the U.S. credit rating, the Dow has been pitching around as if it were the Coney Island Cyclone and millions of Americans are unemployed. Someone should do something!

So why not the Congress -- who have famously done nothing, and only recently decided that they were so useless that the tough choices now needed to be made by a "super committee," with the threat of draconian "trigger cuts" hanging over their head. That's it: America needs those people now more than ever!

This "call Congress back" idea is sort of becoming a thing. Here's Norah O'Donnell, at the August 8 press briefing:

O'DONNELL: The president said our problems are imminently solvable, and he talked about a renewed sense of urgency. Why not call Congress back to work?

CARNEY: Well, I think that what we can do, after the process we just went through, is make clear that when Congress does get back from its recess, it is very clear --

If Congress doesn't return quickly to their important work dedicating post offices to people, how will the Dow get back over 11,000?

Minnesota Representative Michele Bachmann also thinks that Obama should call Congress back into session, saying: "If I were president today, I would call all the members of Congress back into Washington, D.C., and I'd say this: 'Look, we are going to get this AAA credit rating back, and this is what we're going to do.'"

Of course, she's not president today. She is, instead, campaigning to become president. In Iowa. Through the weekend. So, basically, Michele Bachmann thinks it's critical that Congress return, even though she will not be returning with it.

Here's Sen. Mark Kirk (R-Ill.), insisting that "Congress should not be in recess right now":

KIRK: "The president should recall the Congress ... We see tremendous anxiety with the potential of the U.S. to go into recession and one of the greatest ways to restore confidence is not to have a speech and not to lay out a set of vague principles, but to see the elected representatives of the American people working on entitlement reforms right away."

Correct me if I'm wrong, but Kirk appears to be in Chicago, Ill., in that video. Is he having trouble finding the District of Columbia? Does he need a map? Could someone give him a ride back to Washington? 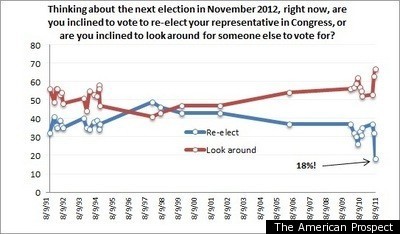 It seems to me that if anything, the American people are probably relieved that Congress has dispersed itself into the wild, where they're on their own and can't harm humanity.

Just stay in your districts, Congresscritters.

CORRECTION: An earlier version of this article misidentified Sen. Mark Kirk as a Democrat. He is a Republican.