It's hard to believe it, but Barack Obama today is more popular than Ronald Reagan was at this juncture in his last year of office, in 1988. But will it help Hillary Clinton secure another term for the Democrats? A look at the evidence produces a surprising finding.

Who Is The Most Popular Lame Duck President?

Gallup released a poll at the end of May showing that Barack Obama had a 51 percent approval rating, against a 45 percent disapproval rating. It may not sound that impressive, but 2016 has been a better year for the president than 2015 and 2014, when his disapproval ratings were not only higher than his approval rating, but topped 50 percent. So his standing with the public is improving.

Moreover, his numbers are slightly better than where Ronald Reagan, the darling of the Republican Party, was at the end of May of 1988. Gallup poll results for all lame duck presidents show "the Gipper" with a 48 percent approval rating, no doubt due to the lingering effects of the Iran-Contra Affair, and perceptions that the president either wasn't in charge, or knew something.

Still, both Obama and Reagan are dwarfed by the numbers Bill Clinton posted at the end of May of 2000. Hillary's husband was supported by 57 percent of the people in a Gallup poll, showing no ill effects from the Monica Lewinsky affair and subsequent impeachment hearings, even if he should have at least been censured.

Even Clinton can't top where President Dwight D. Eisenhower was in his last year of office in May of 1960. The World War II hero sported a 65 percent approval rating from Gallup polls. It reminded me a of a quip from political science professor John Mueller, who claimed that in order for a president to remain popular, he or she must resign on day one, or become Dwight D. Eisenhower.

It was a different story for Harry S. Truman. In May of 1952, he posted a dismal 27 percent approval rating. It would take until the 1992 election, and David McCullough's book, to rehabilitate the Missourian's image with the people. Similarly, President Lyndon B. Johnson's approval rating was an anemic 41 percent in May of 1968. Having been embarrassed in earlier primary contests by Minnesota Senator Eugene McCarthy, Johnson had announced he wouldn't run for another term, but that didn't seem to boost his standing with the public. And George W. Bush had a woeful 28% approval rating in late May of 2008. 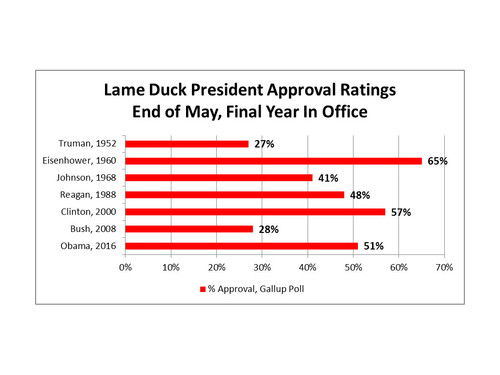 Graph developed by the author

Both Truman and Johnson were unpopular for the status of the war that was going on while both were in their last year of office. George W. Bush was undone by poor management of the economy, wars and disaster relief. Their low numbers hurt their party nominees. Truman lost Adlai Stevenson many votes, the way LBJ was a drag on the ticket for Hubert H. Humphrey. George W. Bush probably cost John McCain the presidency in 2008.

But here's a strange finding. Despite their overwhelming popularity, Eisenhower and Bill Clinton failed to get their respective vice-presidents another term, though Richard Nixon in 1960 and Al Gore in 2000 came really close. Only Reagan was able to extend his coattails to help George H. W. Bush win a term. Already, Obama's improved numbers helped Hillary Clinton edge out Bernie Sanders, who has often criticized Obama for being insufficiently progressive. We'll see if Obama can duplicate Reagan's feat in November of 2016.