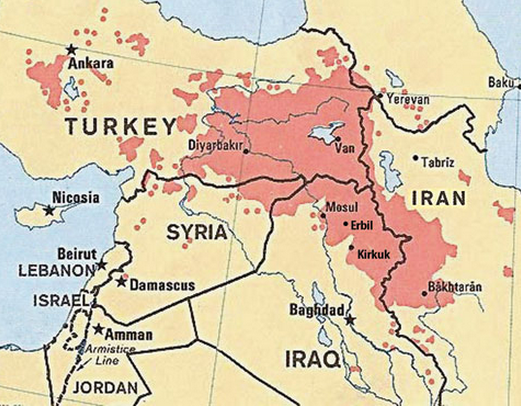 The role of the Obama administration in suppressing the long-running Kurdish uprising in Turkey is largely unknown. But a few weeks ago a U.S. diplomat dropped an intriguing clue. Francis J. Ricciardone, Jr., Obama's ambassador to Turkey, revealed that the U.S. had secretly offered Turkey what was, in effect, a bin Laden-style assassination of the top leadership of the PKK (Kurdistan Workers Party), the rebels who have been fighting the U.S.-equipped Turkish army since 1984.

"Your enemies are our enemies," Ricciardone told Turkish reporters at a news conference in Ankara. "The power of the multidisciplinary approach is what got bin Laden in the end, and we would like to share that and exploit that intimately."

When I heard the ambassador's remarks, I had just left Syria, where a different Kurdish group is struggling for its own autonomy. I was en route at the time to Mt. Qandhil, one of the highest mountains in neighboring Iraq, where PKK rebels have a sanctuary. I was seeking reaction to news that Turkey was quietly negotiating with Abdullah Ocalan, the notorious PKK founder who was captured in 1999 with U.S. assistance, and who since then, has become a cause célèbre with many Kurds in the Middle East.

The 28-year-old Kurdish uprising in Turkey has resulted in 40,000 deaths, most of them Kurds. The U.S. considers the PKK a terrorist group, but experts say both the rebels and Turkish troops have committed human rights abuses. Today, the struggle goes beyond military conflict. Since 2009, some 8,000 Kurdish civilians have been arrested in Turkey. That includes lawyers and at least 100 journalists -- more than in Iran or China.

This fall, some 700-1,000 prisoners went on hunger strike in Turkey, demanding that Ocalan be removed from solitary confinement and that Kurds receive broadcasting rights, education in their native tongue and ethnic recognition in the Turkish constitution. Turkey claims that most of the prisoners have ties to the PKK, but according to Human Rights Watch, many Kurds were arrested in a "crackdown on legal pro-Kurdish politics."

Against this backdrop came Ambassador Ricciardone's startling disclosure: the administration's misguided proposal to target the Kurdish rebel leadership. In fact, the PKK is not al-Qaeda, nor has it targeted Americans -- and Turkey wisely rejected the U.S. offer. "Bin Laden was caught in a house," Prime Minister Tayyip Erdogan sought to explain diplomatically, "but the struggle here is in mountainous geography."

After rebuffing the assassination proposal, Turkey successfully negotiated an end to the vexing hunger strike, which had garnered considerable support in southeast Turkey, where most of the country's 15 million Kurds reside. Had the cockamamie scheme succeeded, the killings would likely have turned Kurdish public opinion against the U.S. and given the rebels a powerful recruiting tool.

This is not the first effort by a U.S. administration to suppress the Kurdish uprising in Turkey. In 1999 the Clinton administration secretly used FBI agents to track and help capture Abdullah Ocalan. For its part, the Obama administration has been helping the Turks fight the PKK for some time by sharing military technology and intelligence. But American participation in the conflict received little attention until a year ago when a U.S. drone mistakenly identified Kurdish civilians as rebels, resulting in the deaths of 35 villagers. The assassination offer came at a delicate moment in Turkish-Kurdish relations and, while it might have wiped out the PKK's top command, it exposes how out of step the Obama White House is with the aspirations of ordinary Kurds in the Middle East. There are 30 million Kurds in the region, spilling over the borders of Iraq, Turkey, Syria and Iran. Despite U.S. foreign policy to the contrary, many Kurds in these countries support the PKK and the age-old Kurdish dream of a unified homeland.

In Syria, where the Kurds number two million, "Apo" -- as PKK leader Ocalan is widely known -- now enjoys a cult-like status. That is partly because Syrian Kurds overwhelmingly back the Democratic Union Party (PYD) in Syria, a PKK ally. But the deeper reason is that local Kurds, like those in Turkey and Iran, are simply fed up with generations of second-class citizenship. With the Arab opposition to the Assad regime badly fragmented, many Kurds believe they will emerge as a winner in Syria's bloody civil war. Despite all odds, they cling to the belief that autonomy -- a "Kurdish Spring" as some call it -- is coming.

In one Syrian town this fall, I counted about 700 protesters in the streets. Young and old, they spoke Kurdish, played Kurdish music and wore traditional Kurdish clothing; many carried Kurdish flags or photos of Ocalan. Just a short time ago, such behavior would have landed them in jail -- or worse.

Across the Tigris River in Iraqi Kurdistan, where the economy is still booming in the wake of the popular U.S. invasion, Ocalan has a strong following. I have heard people in shops and tea houses there refer to the imprisoned rebel leader as "Nelson Mandela" -- but, of course, not everyone agrees. "I don't like Apo's ideology," Mohammed Haji Mahmoud, an elected parliamentarian in the Kurdistan Regional Government, told me. Still, he cautioned the U.S. not to underestimate Ocalan's appeal: "If Apo ran for president in Turkish Kurdistan," Mahmoud said, "He'd be elected by acclaim."

And Iran? The case of PEJAK, the Iranian Kurdish guerrillas who share territory with the PKK on Mt. Qandhil, is instructive. The PEJAK group wants regime change in Tehran, just as many officials in Washington do. But the rebels view Ocalan as a freedom fighter, not a terrorist.

As I approached Mt. Qandhil, my fixer advised me to remove the battery from my cell phone, lest we become a target for a U.S. drone. That seemed a little paranoid, but it made me think about all the Kurdish uprisings -- including the current one -- that have taken place in these lands over the last century. Military "solutions," like the recent one proposed by the Obama administration, have failed to solve the Kurdish question, but there still may be a chance for diplomacy.

The next time the Kurds raise legitimate grievances, the U.S. should urge negotiation, not assassination. In 21 years of traveling to the region, I have never met a Kurd who didn't like Americans. It seems a pity to squander that good will.

Kevin McKiernan is a journalist and filmmaker. He directed the PBS film Good Kurds, Bad Kurds and is the author of the book The Kurds: A People in Search of Their Homeland. His report on the Kurds in Syria appeared this month in the Santa Barbara Independent.