WASHINGTON -- A top Republican lobbying shop lost major business over the past few years because clients thought "Obama was going to be dictator," and only firms closely aligned with the administration would have access, Ed Rogers, the head of BGR Group, said in a deposition taken in January.

BGR Group, founded by top Republican players Haley Barbour, Lanny Griffith and Rogers, peaked in 2007 with more than $20 million in revenue. In three years of the Obama administration, revenue has been down roughly 25 percent, according to the Center for Responsive Politics. Barbour returned to the firm in 2012 after two terms as Mississippi governor. 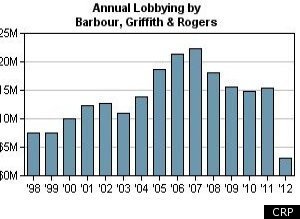 "There was a spike in people thinking that Obama was going to be dictator and to get a fair hearing, which is all you're ever really going to get or all you literally want, you had to be close to the Obama administration. We were not," Rogers testified.

"Well, was that just a perception or is that reality?" he was asked.

"It's a perception more than anything. Washington is becoming a town of what you know, not who you know," Rogers said.

Jeffrey Birnbaum, a spokesman for BGR Group, declined to comment.

In his deposition, Rogers also blamed the sagging economy, a saturated lobbying industry and some high-level departures for the downturn. "There was a dramatic turn in the macroeconomy, to the nature of the business, to personnel moving on, to increased expenses," he said.

Rogers' deposition was taken as a part of divorce proceedings. The divorce from his wife Edwina Rogers is becoming a hard-fought affair, and headed for open court, which could expose the powerful lobby shop's internal records to an unusual amount of scrutiny. Rogers is a prominent figure in Washington and regularly appears on National Public Radio as a Republican strategist.

BGR Group represents corporate clients and foreign governments, including Kazakhstan and a Russian bank with ties to Iran's nuclear program.

The firm was previously known as Barbour, Griffith & Rogers, but changed its name to "rebrand" the firm as bipartisan, Rogers said during his deposition.

"To rebrand the firm bipartisan, [we decided to] drop the Barbour, Griffith & Rogers. For some reason we picked the name BGR Holding. And nobody liked it. And we had cards and stationery and everything else. And nobody liked it, and so we changed it," Rogers said, to BGR Group.