"You don't hold attorney general nominees hostage for other issues," Obama told The Huffington Post's Sam Stein in a sit-down interview. "This is our top law enforcement office. Nobody denies that she's well-qualified. We need to go ahead and get her done."

Lynch's nomination has been languishing for more than 130 days. This week, Senate Majority Leader Mitch McConnell (R-Ky.) threw up another roadblock, warning that she wouldn't get a vote until his chamber passes human trafficking legislation. Democrats object to anti-abortion language in the bill.

The president's comments were essentially a call to arms to Senate Democrats to stand firm rather than surrender to the hostage-takers, i.e., Senate Republicans, on the trafficking bill. 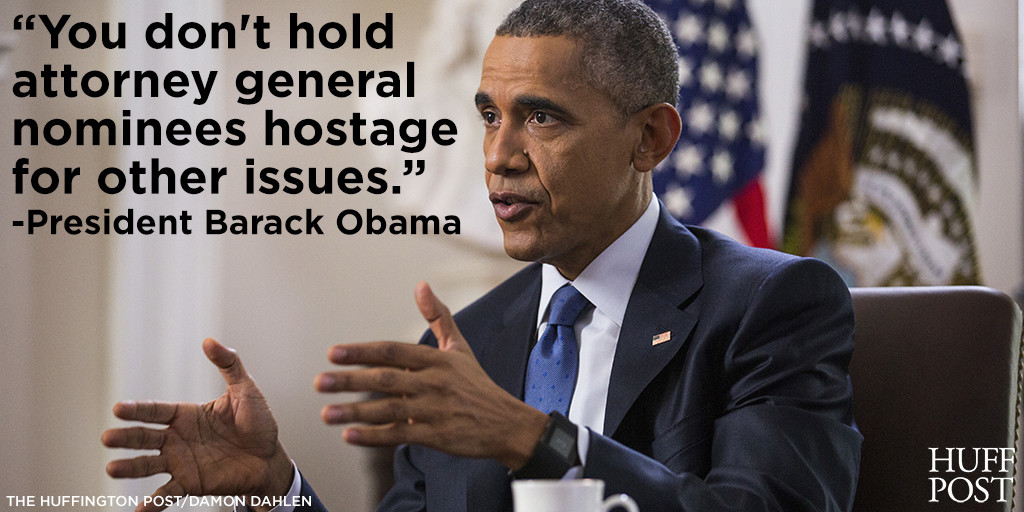 On Wednesday, Sen. Dick Durbin (D-Ill.) went after his GOP colleagues for the delay in voting on Lynch, suggesting that they were treating her differently because of her race.

"Loretta Lynch, the first African-American woman nominated to be attorney general, is asked to sit in the back of the bus when it comes to the Senate calendar," said Durbin. "That is unfair. It's unjust. It is beneath the decorum and dignity of the U.S. Senate."

"I think race certainly can be considered a major factor in the delay," said Rep. G.K. Butterfield (D-N.C.), chair of the Congressional Black Caucus, on Tuesday.

Obama, however, was less convinced about Republican motivations.

"I don't know about that," the president said on Friday, referring to the role that race may have played in delaying Lynch's confirmation. Instead, he pointed to "Senate dysfunction" and "stubbornness on the part of Republicans to move nominees, period."

"What I do know is that she is eminently qualified. Nobody denies it," Obama said. "Even the Republicans acknowledge she's been a great prosecutor. She has prosecuted terrorists in New York, she has gone after organized crime, she's gone after public corruption. Her integrity is unimpeachable. By all accounts, she's a great manager, and the fact that she has now been lingering in this limbo for longer than the five previous attorney general nominees combined makes no sense. We need to go ahead and get this done."

Attorney General Eric Holder also dismissed the idea of race playing into the holdup during an MSNBC interview Friday.

"My guess is that there is probably not a huge racial component to this, that this is really just D.C. politics, Washington at its worst," he said. "A battle about something that is not connected to this nominee, holding up this nominee. I think that's the main driver here."

The president confirmed Friday that Holder, who has long been the target of GOP lawmakers' ire, has agreed to stay on as attorney general until his replacement is set.

"The irony is, of course, that the Republicans really dislike Mr. Holder," said Obama. "If they really want to get rid of him, the best way to do it is to go ahead and get Loretta Lynch confirmed."

The Huffington Post’s full interview with President Obama will be published on Saturday. To be the first to see the whole interview, sign up for HuffPost breaking news alerts here.