Giuliani has since partially walked back on the comment, writing over the weekend that he "didn't intend to question President Obama's motives or the content of his heart."

But while 47 percent of Americans say Obama loves the country, the rest say he doesn't or that they're unsure. Just 11 percent of Republicans say they think the president loves America. 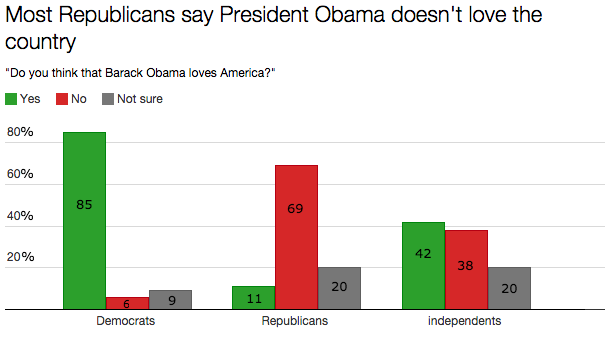 Americans are similarly divided along party lines on whether they think Obama believes the U.S. is exceptional, and on whether he's more or less patriotic than most people. Republicans overwhelmingly say he's less patriotic, while Democrats say he's as patriotic or more, and independents are split.

It's not particularly hard for pollsters to convince people to question the sincerity of their political opponents -- a phenomenon that also extends to topics like Obama's Christianity, which Wisconsin Gov. Scott Walker (R) said last week he couldn't vouch for. In a 2010 Pew Research poll, Americans' ratings of Obama's job performance were closely tied to whether or not they believed he was Christian.

In the new poll, the percentage of Americans who say Obama loves the country lines up closely -- and in the case of Republicans, perfectly -- with the president's overall favorability rating. While a small percentage of Democrats and independents who dislike the president nevertheless give him the benefit of the doubt, the Republicans who rate him unfavorably are at best willing to say that they're not sure about his devotion to the U.S. 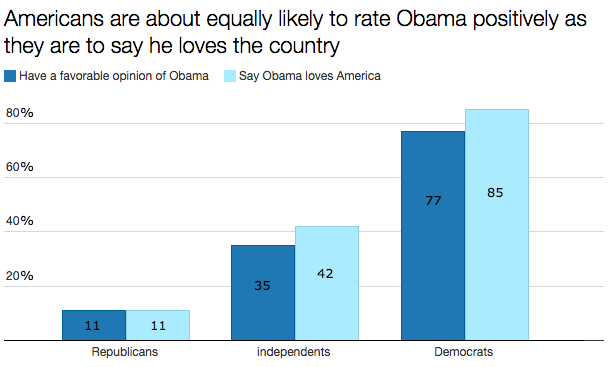 Democrats, however, are more willing to extend goodwill to the other side. Although just 26 percent have a favorable view of Giuliani, a full 54 percent say they believe he loves America, and just 12 percent say that he does not.

In one point of partisan agreement, 85 percent of Americans, including 88 percent of Democrats and 95 percent of Republicans, say they themselves love America, and 70 percent say they believe that the U.S. is exceptional.