Friday, Barack Obama and Hillary Clinton hosted a joint public appearance in the aptly named town of Unity, New Hampshire. The event aimed to garner campaign contributions and promote party healing, but it also serves as a crucial opportunity for Hillary to pass the mother torch to Obama.

At last count, there are 80.5 million moms in America. Of women over 60 (that crucial demographic Obama and McCain have been courting since Clinton dropped out), more than 80 percent have children. NBC News exit polls from the 2004 presidential election showed 20% of voters were women with children.

'Soccer moms.' 'Wal-mart moms.' 'Security moms.' Politicians have long loved to shine the rhetorical spotlight on mothers. But do they really know what these women want?

Mothers will vote to protect their families, according to Ruth Mandel, director of the Eagleton Institute of Politics at Rutgers University and an expert on women and politics. "Whatever affects their families, whether [it] is their children or their spouses or their own aging parents, family issues are of central importance."

Both candidates have positioned themselves as family men, John McCain hitting the campaign trail with his 95 year-old mother and Barack Obama rallying with his daughters.

Although this is important, mothers are most concerned right now with providing for their families. An informal poll on the site "TodaysMama," lists the economy as the number one concern for moms this election. Security, health care, education, child care and equal pay also rank highly.

When it comes to these issues, it looks like Senator McCain might run into some trouble. His actions are telling us he's on the wrong side of the issues for the majority of mothers: he's against ending the occupation in Iraq, against comprehensive family planning, against a woman's right to safely end an unwanted pregnancy, against comprehensive health care for America's families, and against legally mandated equal pay for men and women.

This pay equity position is especially upsetting to mothers who know that, while wage gaps between women and men in entry-level jobs are slight, women with children make only 70 cents to their male counter-parts dollar.

Senator Obama, on the other hand, is much better aligned with mothers on most of their key issues. He hit the rhetorical nail on the head at a recent event in New Mexico, when he said, "I would not be standing before you today as a candidate for president of the United States if it weren't for working women. I'm here because of my mother, a single mom who put herself through school... I'm here because of my grandmother, who helped raise me... And I'm here because of my wife, Michelle, the rock of the Obama family."

At that point you could see the working-class women that he had trouble connecting with in Pennsylvania lean in and nod in agreement. He continued: "Too many of America's daughters grow up facing barriers to their dreams. And that has the consequences for all American families. It's harder for working parents to make a living while raising their kids. And we know that the system is especially stacked against women."

This speech was authentic and empathetic connection done at its best, but Obama knows that mothers are tough customers who care just as much about policy as they do about powerful rhetoric. In New Mexico, he also spoke about how he wanted to close the gender pay gap by sponsoring the Lilly Ledbetter Fair Pay Restoration Act that would have made it easier for women to challenge pay discrimination. And on all other key policy positions -- the war, health care, family planning, and choice, his views are in line with many mothers' -- and are the exact opposite of his opponent's. 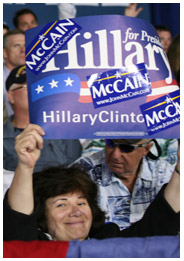 Obama may have the clear advantage with the mother vote on the image, talk and policy fronts, but McCain has shown lately that he isn't willing to let the mom vote go without a fight. His camp is racing, arms out for an embrace, towards those disgruntled Hillary voters. A photo recently added to the home page of his web site shows a smiling, middle-aged white woman holding a Hillary for President sign with McCain stickers slapped all over it. But if Senator McCain thinks a website facelift is all he needs to reel in mothers, he's wrong. Mothers work too hard for their families to fall for empty gimmicks that may hide real facts.