US President Barack Obama headed to Mexico on Thursday to put trade back at the heart of bilateral ties, but his southern neighbor's shifting drug war tactics loom large over the visit.

Mexican President Enrique Pena Nieto hosts Obama on the first stop of a three-day trip that will also take him to Costa Rica for a summit with Central American leaders, with trade, US immigration reform and the battle against drug cartels high on the agenda.

After almost seven years of bloodshed by drug gangs that has left 70,000 people dead in Mexico, Pena Nieto and Obama have both made clear they want to turn the spotlight back on trade ties and other matters.

"We've spent so much time on security issues between the United States and Mexico that sometimes I think we forget this is a massive trading partner responsible for huge amounts of commerce and huge numbers of jobs on both sides of the border," Obama said on Tuesday.

Mexico and Washington want to "talk about the benefits and the need to re-balance and diversify the relationship," Sergio Alcocer, Mexico's deputy foreign minister for North America, told AFP.

Before Obama's departure, the United States announced the creation of a bilateral forum on higher education, innovation and research to broaden educational exchanges.

But the relationship has been marked by deep cooperation in the fight against powerful drug cartels that make billions of dollars by feeding cocaine, marijuana and heroin to US addicts.

The United States is providing $1.9 billion in aid, including police training and crime-fighting equipment, to help Mexico fight the drug gangs.

Pena Nieto, who visited Obama in Washington shortly before taking office in December, wants to refocus the drug war on reducing the wave of violence plaguing his country.

While he is keeping troops that were deployed in the streets by his predecessor for now, he has launched a new strategy that includes a crime prevention program and a shift in the way Mexico will work with US law enforcement.

His predecessor, Felipe Calderon, forged unprecedented security ties with Washington by allowing US agencies to deal directly with Mexican counterparts during his six-year administration.

But the new government wants to channel all security matters through a "one-stop window," the powerful interior ministry, which has been tasked with coordinating Mexico's fight against organized crime.

Obama said he was not yet ready to judge how Pena Nieto's strategy would change security relations until he had spoken to him.

"At this point, we're confident that we're going to have a good constructive and effective security relationship with Mexico, and we look forward to hearing from them about how they plan to go forward with it," said Obama's advisor for Latin America, Ricardo Zuniga.

Rights groups want Obama to address the high level of impunity in Mexico, with Reporters Without Borders urging the US leader to commit to helping "restore the rule of law and civil liberties" in a country where 86 journalists have been killed in the past 10 years.

Pena Nieto will hold talks with Obama at the historic National Palace, with tight security around the building famous for its Diego Rivera murals, before hosting a dinner at the Los Pinos presidential residence.

Obama then travels to San Jose on Friday for a summit with Central American leaders before returning to Washington the next day.

With 11 million undocumented migrants living in the United States -- two thirds of them from Mexico -- regional leaders will want to discuss Obama's push for comprehensive immigration reform. 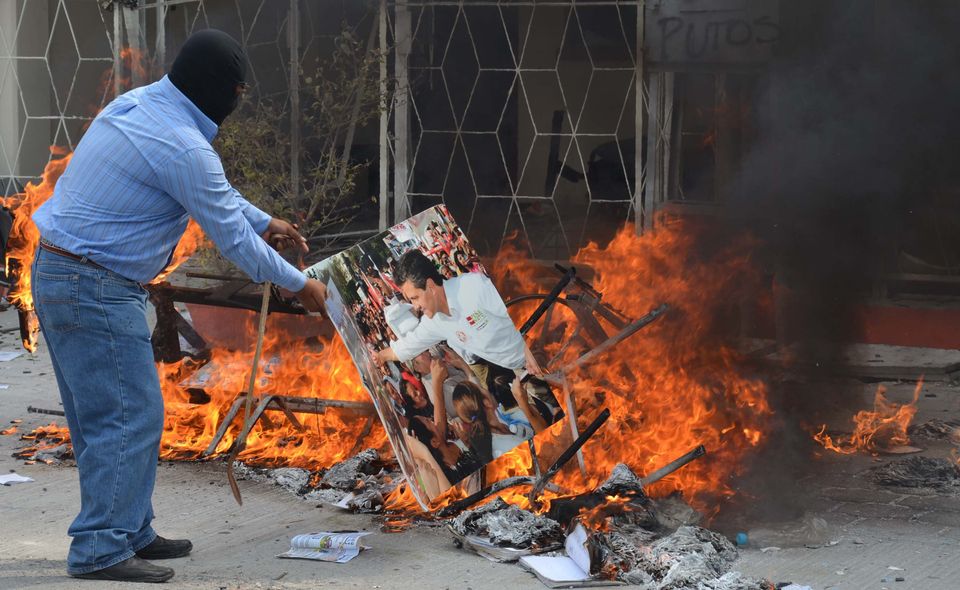 1 / 14
Protesting against President Pena Nieto's education reform project, a teacher burns a photograph of the Mexican leader outside a Secretary of Education office after they attacked the building, in Chilpancingo, Mexico, Wednesday, April 24, 2013. Thousands of elementary and high-school teachers in Guerrero, one of the country's poorest and worst-educated states, walked off their jobs more than a month ago, turning away hundreds of thousands of children from their classrooms and since launched an increasingly disruptive string of protests. (AP Photo/Alejandrino Gonzalez)
AP