The Obamas are certainly no strangers to "The View." Both President Obama and Michelle have appeared on the show separately in the past, but today marked their very first joint interview with Barbara Walters, Whoopi Goldberg, Elisabeth Hasselbeck and the rest of the hosts. So obviously we took this opportunity to bask in their respective outfits and adorable PDA on daytime television.

Style-wise, the president wore a dark suit, white shirt and dark striped tie as he fended off tough questions from Hasselbeck; Mrs. Obama wore an emerald green sleeveless dress, below the knee in length with a square neckline. Only one of them, however, was wearing stylish layered necklaces and pointed-toe pumps. (We'll let you guess.)

The occasion also fell on Barbara's 83rd birthday, and POTUS & FLOTUS would never show up empty-handed. The president brought Walters a gift basket of goodies, including White House M&Ms, Marine One playing cards and a bottle of White House beer.

Of being the only male on stage, Mr. Obama said, "I told folks I'm just supposed to be eye candy here for you guys." He and FLOTUS, who held hands for most of the show (cue the "awwww"s) then rehashed the famous story of their first kiss in front of Baskin-Robbins.

As the couple prepare to celebrate their 20th wedding anniversary on Oct. 3, the night of the first presidential debate, the first lady weighed in on the perks of not being the one having to face Mitt Romney: "I have the best job. I don't have to make the hard decisions." She also poo-pooed any idea that she would run for public office: "It takes a lot of patience to be the president of the United States and I am not that patient."

Check out some photos of Mrs. O's dress and a couple video clips below: 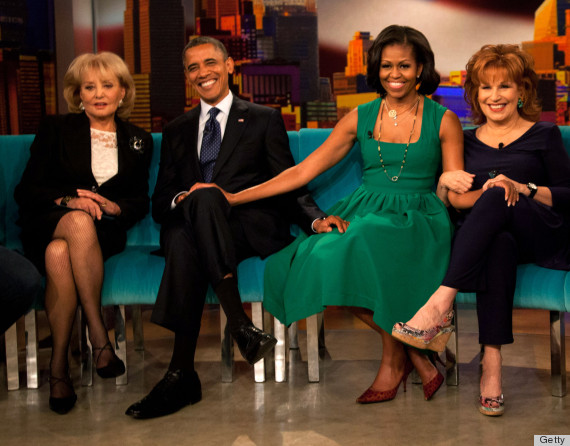 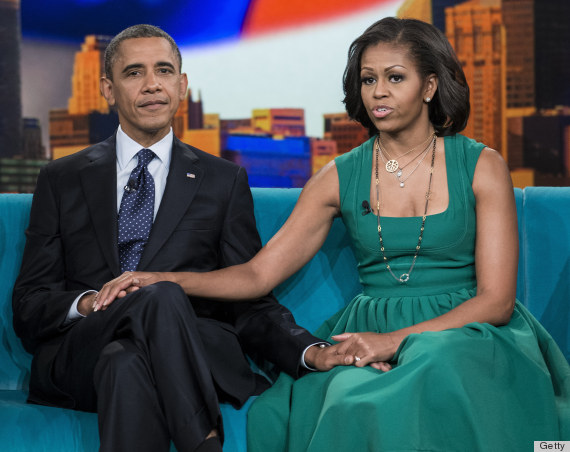