Barack Obama tapped his sizeable grassroots network on Saturday, coordinating over 4,000 "Unite for Change" meetups across the country through the campaign's social networking portal, MyBo. At the same time, however, other supporters worked furiously over the weekend to organize a new MyBo campaign to protest and pressure Obama. Many activists are outraged by the Senator's recent announcement that he will back a controversial bill to grant the Executive more spying powers and immunize telephone companies accused of illegal surveillance. Both efforts demonstrate how Obama's national network, which broke fundraising records and turned the first term Senator into an unlikely presidential nominee, can respond to top-down edicts and spring into action for self-organized protests.

Since launching last week, the protest group, "Senator Obama Please Vote NO on Telecom Immunity - Get FISA Right," swelled to one of the ten largest campaign groups on Sunday. (FISA is the Foreign Intelligence Surveillance Act, which the Democratic Congress is poised to amend under White House pressure.) It is the largest group of its kind on MyBo, which focuses on local networking, official campaign events, and constituency groups like "Women for Obama." It looks like the group grew through the Obama network, with a few web mentions on liberal sites such as OpenLeft and TPM, and it urges Obama to reject the "politics of fear" and lead Democrats to oppose the White House bill. Blogger Mike Stark says the effort demonstrates the kind of civic engagement and "open government" that Obama espouses, even if it delivers the "sting of social networking" pushback during a tight campaign.

One Democratic Internet consultant predicted that Obama's reaction could reveal his commitment to meaningful engagement with supporters. "How Obama responds will tell us a great deal about both his willingness to listen to input from his supporters and what influence the MyBarackObama community has on the campaign itself," said the operative, who wished to remain anonymous while working on another campaign. "In the meantime, this is a huge opportunity for Obama's supporters to organize around an issue, not just the candidate, and take action beyond using their credit card."

There's no way to know whether the criticism resonates with the hardcore activists who gathered at Saturday's official events. The 4,000 meetups, which drew guests from MyBo and local networks offline, generated overwhelming interest. Though barely covered by the mainstream media, the gatherings suggest another edge for Obama's Internet organizing. 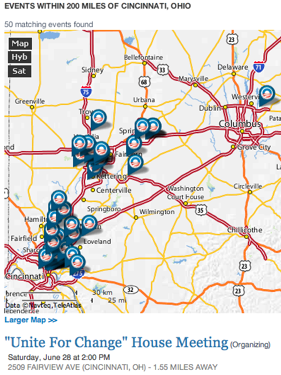 The campaign reported over 200 events in the pivotal state of Ohio alone, where middle-aged voters like Cheryl Wright, of Boardman, hosted students and neighbors in her living room. Back in bluer territory, Patrick Callahan, a 31-year-old Brooklyn educator, drew about 35 people to a meetup barbeque. He said about half of the guests were his friends, and half were strangers who found him through MyBo. In a completely anecdotal sample, one attendee told me that Obama's surveillance stance was disappointing, while several others said they had not heard of the issue. Callahan, who learned of the "Unite for Change" meetups from a campaign email, said he was willing to throw open his home to strangers because he backed Obama's positions on education and foreign policy, while McCain wants to stay "in Iraq for at least the next 100 years."

Obama's official events obviously beat the MyBo protests by several orders of magnitude, and the campaign deserves credit for hosting the very technology people are using to organize and pressure the candidate. Obama won the nomination by blending the practical and the ideal -- riding the financial juggernaut of Internet politics and promising a new, interactive civil society along the way. He made people feel good, and connected, and they showered his long-shot campaign with money, energy and adulation. Their votes are already in the bag, in general election calculus, but their work, enthusiasm and contributions to any larger "movement" are not guaranteed. Just as the campaign worked to mobilize so many supporters this weekend, it may have to reengage supporters concerned about Obama's recent drift. He could answer their arguments with a direct video explaining his vision for restoring the rule of the law and constitutional rights. Granting more unchecked surveillance power to the Executive and sidelining judicial oversight is a staggering affirmation of Bush's approach, especially coming from the candidate of change. If Obama is going to stand by that failed policy, he should at least explain his thinking in depth. It might even get more hits than a fundraising video.

Ari Melber is the Net movement correspondent for The Nation, where this first appeared. Check out the Net Movement Politics Facebook Group.