Since awarding U.S. President Barack Obama the Nobel Peace Prize in 2009, an award that showed just how greatly the Norwegian parliamentarians' selection process had degenerated and departed from Alfred Nobel's will, Nobel Secretary Geir Lundestad has tried to minimize the serious nature of the charges against his selection committee by labeling Obama's and Henry Kissinger's "peace" prizes as merely "controversial." Lundestad also recently claimed he is "eager for this debate to end," however he has consistently refused to answer the hard questions that lie at the root of the current investigation of the Nobel Foundation.

According to peace researcher and author Fredrik Heffermehl:

The investigation was opened as a result of revealing truths in my book on the Nobel peace prize (http://www.nobelwill.org), not least some private diaries from a former chair laid bare how the committee is not in the least interested in what Nobel wanted, they have made it the Norwegian parliament´s prize for peace. Based on the book Swedish authorities last month decided to open an investigation into whether the Norwegian awarders take Nobel into consideration at all. In fact Nobel clearly specified HOW in his view the world could be freed from the deadly embrace of militarism. There is no basis for doubt about what Nobel actually intended. When Nobel wrote his will he entrusted the prize to the then very peace loving Norwegian parliamentarians, but today the purpose of Nobel´s will runs on right-on collision course with prevailing attitudes in Norwegian politics.

Endorse as an organization. Endorse as an individual. Dear Members of Stockholm's County Administrative Board:

The signers of this petition include an array of peace groups and peace activists based in the United States. The undersigned wish to endorse and support the investigation that Stockholm's County Administrative Board has reportedly begun based on it supervisory role over the Nobel Foundation and information received from Norwegian peace researcher/author Fredrik Heffermehl. We understand your Board has formally asked the Nobel Foundation to respond to allegations that the peace prize no longer reflects Nobel's will that the purpose of the prize was to diminish the role of military power in international relations. According to Heffermehl, "Nobel called it a prize for the champions of peace,...and it's indisputable that (Nobel) had in mind the peace movement, the movement which is actively pursuing a new global order ... where nations safely can drop national armaments."

The undersigned non-profit peace organizations and activists base their endorsement of your inquiry on the following facts:

Alfred Nobel's will, written in 1895, left funding for a prize to be awarded to "the person who shall have done the most or the best work for fraternity between nations, for the abolition or reduction of standing armies and for the holding and promotion of peace congresses."

After only a few years, however, a disastrous trend was begun of awarding the prize to government officials and political figures who had done more to promote war than peace. For instance in 1919, the Nobel "prize for peace" went to Woodrow Wilson who had needlessly dragged his own nation into the worst war yet seen; who had developed innovative war propaganda techniques, conscription techniques, and tools for suppressing dissent; who had used the U.S. military to brutal effect in the Caribbean and Latin America; who had agreed to a war-promoting settlement to the Great War; but who, in the war's aftermath, promoted a "League of Nations" in the hopes of resolving disputes peacefully.

Although the Nobel peace prize came to be heavily, but by no means entirely, dominated by elected officials, yet some excellent award choices occurred in the ensuing years: that of Jane Addams as co-recipient in 1931, Norman Angell in 1933, and organizations, such as the Red Cross in 1944 (and again in 1963) and the American Friends Service Committee in 1947. It's worth asking, however, why even more principled war opponents including Gandhi were never deemed worthy.

In 1953 the Nobel went to General George Marshall. In 1973 a co-laureate was none other than Henry Kissinger and whatever their merits, these were major makers of war who would almost certainly have also won the Nobel War Prize, were there such a thing. This insanity competed, however, with the bestowing in other years of the prize on leaders who were not holders of high office, not necessarily born to wealth, and not only opponents of war but also advocates of the use of nonviolent resistance to violence and injustice. Thus the peace prize went in 1964 to Martin Luther King, Jr., in 1976 to Betty Williams and Mairead Corrigan, in 1980 to Adolfo Pérez Esquivel, in 1983 to Lech Walesa, in 1984 to Desmond Tutu, in 1991 to Aung San Suu Kyi, in 1992 to Rigoberta Menchú Tum, etc.

The Kissinger style "peace" laureate, and the MLK type differed in that one was the path of peace activists who dedicated their careers to international fraternity and demilitarization and the other was the path of powerful figures and makers of war who had either shown some restraint in a particular instance or had appeared (accurately or not) to have acted on behalf of peace in a particular situation. Honoring both nonviolent human rights advocates and mass murderers has moved the prize away from advocacy for the elimination of standing armies and is at odds with the words in Nobel's will as well as the early tradition of awarding the prize to true advocates of peace.

In 2006 and 2007, Muhammad Yunus and Al Gore took home peace prizes for work that, at best, bears only an indirect connection to peace.

Despite these previous examples of falling short of Nobel's original intent in establishing the Peace Prize, at least from 1901 to 2008, no peace prize was given to anyone who had neither done nor even pretended to do anything significant for peace nor done any other good and significant thing that some people might believe would indirectly contribute to peace. That all changed in 2009 when US President Barack Obama was awarded the Nobel Peace Prize. Obama had just been placed in a position of great power promising to expand the world's largest military, to escalate a war, and to launch strikes into other nations without any war declarations. He showed up to collect his winnings and gave a speech justifying and praising war. His acceptance speech rejected a previous laureate's (MLK's) speech as too peaceful. The 2009 Nobel Prize recipient, President Barak Obama, did not even attempt to earn his award as some had hoped but has instead followed through on his speech justifying and praising war. This hypocrisy has not gone unnoticed by many other people in the world, prompting 1980 Peace Laureate Adolfo Pérez Esquivel's recent letter to the 2009 peace laureate bemoaning the fact that Obama is waging wars on behalf of the military industrial complex and "burying himself more and more in violence and devoured by the domination of power". In addition to directly contradicting the terms of Alfred Nobel's last will, the awarding of the world's foremost peace prize to a militarist who states his intent to wage war, perniciously serves the opposite purpose.

We therefore commend your investigation of the betrayal of the award in order to re-establish criteria for the Nobel Peace Prize that is aligned with Nobel's original intent. We also suggest your Board communicate with the Nobel Foundation urging them to rescind Obama's award so that the Nobel Peace Prize does not serve to sugarcoat, obfuscate and enable more use of violence and military force, the exact opposite purpose for which it was created. We will keep you apprized as more US peace groups and individuals sign this endorsement. 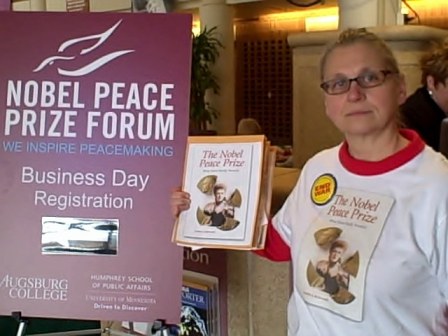 The Nobel Prize Foundation and other Nobel Prize Awarding Institutions should be thanked for their century-long efforts to educate and hopefully bring about more peace in the world. At the same time, however, these institutions must be made aware that their efforts are increasingly undermined, and deeply perverted by their growing departure from the original criteria set forth in Alfred Nobel's will for selecting the recipient of the Peace Prize. Such continual disregard of the original intent of the "Peace" Prize actually serves to enable the waging of war, fulfilling Orwell's prediction about how propaganda works in making people believe that "war is peace". Obviously the majority of officials and people involved with the various Nobel Organizations and Nobel Peace Forum sponsors are not intending to do this, to help the cause of war and militarism. They simply have not conducted the self examination necessary to realize how seriously off-track the Peace Prize has gone. Similarly it took a lot for Alfred Nobel himself to see the light, that his invention of dynamite would be used for violent wars and murder. The purpose of our on-line petition is to get more Nobel Peace Prize officials (including "Nobel Peace Prize Forum" partners and sponsors) to critically think!