While many were delighted with President Barack Obama's quip to Mitt Romney about "fewer horses and bayonets" in today's military, one constituency that apparently wasn't too happy was the bayonet community.

Several sources in the bayonet industry told TMZ they were "shocked" and "offended" with Obama's comment.

Dan Riker, the owner of Bayonet Inc., a military surplus store that sells bayonets, described the president's comment as "ignorant."

Bayonets "are still distributed to the military all the time," Riker told TMZ. "He should get educated on it."

Other companies that sell bayonets weren't so quick to weigh in, however.

A representative for Ontario Knife Company, which according to its website is "a major supplier to the U.S. Government," said the company wouldn't be doing any interviews related to the debate beyond a statement sent to HuffPost.

“We take pride in our military products and it’s an honor and privilege to supply these weapons/tools to the US military,” Ken Trbovich, president and CEO of Ontario Knife Company, said in an emailed statement. “The military deploys our products for a wide range of combat and field operations, these include but are not limited to breaching devices, rescue tools and combat weapons."

But Riker, of Bayonet Inc., was certainly not alone in his response. Michelle Malkin, a conservative commentator, called Obama's line "smirky, snarky, ignorant." A front page article on Fox Nation, the Fox News opinion and commentary site, linked to the U.S. Marine Corps website, which states that every Marine is trained in bayonet use.

It should be noted, however, that Obama said there are "fewer horses and bayonets," not that bayonets have been eliminated from the armed services.

As the Wall Street Journal notes, hand-to-hand combat is fairly uncommon and "few Marines or soldiers ever use a bayonet and service members on patrol do not equip their rifles with bayonets."

Obama's comment began to trend on Twitter during the debate, and the Obama campaign even bought advertisements for the search term "bayonets."

Obama For America has also launched "Cavalry Men For Romney," a site devoted to highlighting president's national security positions, showing how Obama "is restoring America's standing across the globe and maintaining a modern military."

View this excerpt from the debate transcript (via The New York Times):

ROMNEY: Our Navy is older — excuse me — our Navy is smaller now than any time since 1917. The Navy said they needed 313 ships to carry out their mission. We’re now down to 285. We’re headed down to the — to the low 200s if we go through with sequestration. That’s unacceptable to me. I want to make sure that we have the ships that are required by our Navy.

OBAMA: You — you mentioned the Navy, for example, and that we have fewer ships than we did in 1916. Well, Governor, we also have fewer horses and bayonets — (laughter) — because the nature of our military’s changed. We have these things called aircraft carriers where planes land on them. We have these ships that go underwater, nuclear submarines.

And so the question is not a game of Battleship where we’re counting ships. It’s — it’s what are our capabilities.

And so when I sit down with the secretary of the Navy and the Joint Chiefs of Staff, we determine how are we going to be best able to meet all of our defense needs in a way that also keeps faith with our troops, that also makes sure that our veterans have the kind of support that they need when they come home. And that is not reflected in the kind of budget that you’re putting forward, because it just don’t work..

Click over to The New York Times for the full transcript, and read more from Bayonet Inc's Riker at TMZ.

This story has been updated to include the statement from Ontario Knife Company.

CLARIFICATION: For clarify, the ABC News debate transcript has been replaced with a transcript from The New York Times. 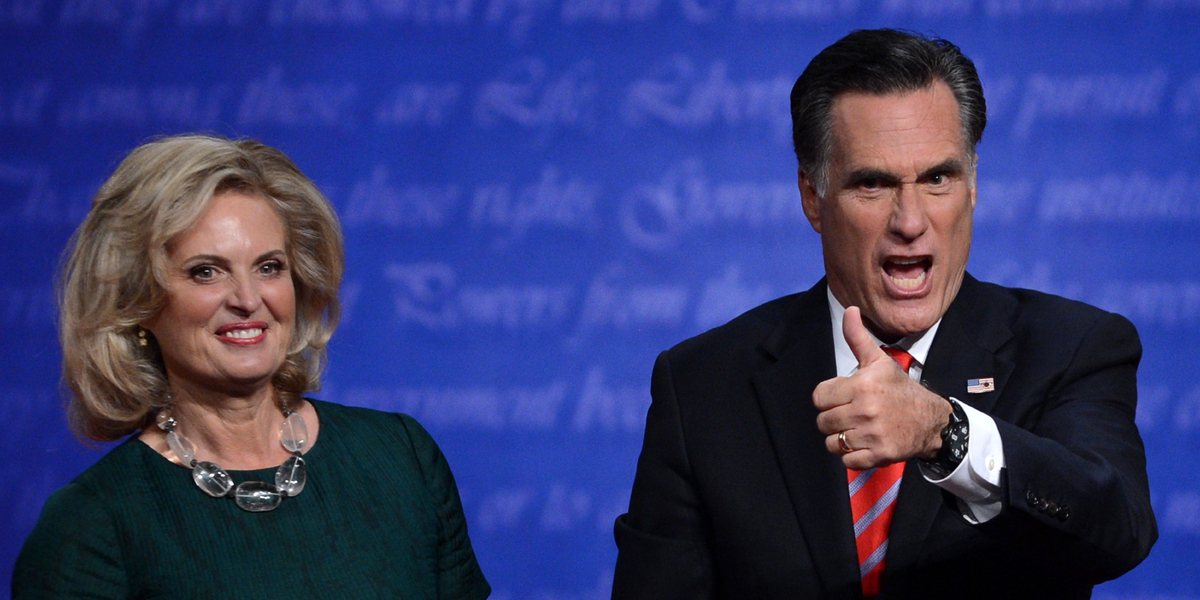 1 / 93
US-VOTE-2012-DEBATE
Republican presidential candidate Mitt Romney gestures beside his wife Ann following the third and final presidential debate with US President Barack Obama at Lynn University in Boca Raton, Florida, October 22, 2012. The showdown focusing on foreign policy is being held in the crucial toss-up state of Florida just 15 days before the election and promises to be among the most watched 90 minutes of the entire 2012 campaign. AFP PHOTO / Saul LOEB (Photo credit should read SAUL LOEB/AFP/Getty Images)
Getty Images