In what was clearly a very difficult portion of his address Monday night in North Carolina, Barack Obama spoke for several minutes on this grandmother's death from cancer Sunday night. At one point, it seemed, he was moved to tears. 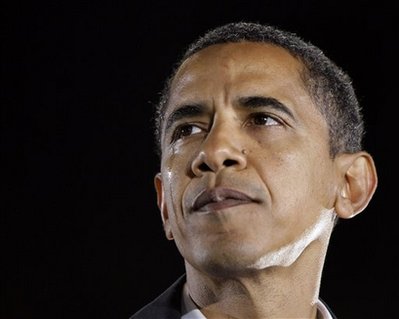 Calling it a "bittersweet time" in his life, there were moments when one could detect the sadness in his voice and face. The crowd in Charlotte did its best to pull him along, screaming out words of support as he detailed Madelyn Dunham's life and drew from it threads that weaved into his candidacy and message. It was a poignant moment: the woman who helped raise him passing away just hours before the election.

No matter what happens tomorrow, I'm going to feel good about how it has turned out because all of you have created this remarkable campaign. She is gone home. And she died peacefully in her sleep, with my sister at her side. And so, there is great joy as well as tears. I'm not going to talk about it too long because it is hard, a little, to talk about.

I want everybody to know though a little bit about her. Her name was Madelyn Dunham. And she was born in Kansas in a small town in 1922. Which means she lived through the Great Depression, she lived through two world wars, she watched her husband go off to war, while she looked after her baby and worked on a bomber assembly line. When her husband came back they benefited from the GI bill, they moved west and eventually ended up in Hawaii.

She was somebody who was a very humble person, a very plainspoken person. She is one of those quiet heroes we have all across America, who are not famous, their names are not in the newspapers, but each and every day they work hard. They look after their families. They sacrifice for their children, and their grandchildren. They aren't seeking the limelight. All they try to do is do the right thing. And in this crowd, there are a lot of quiet heroes like that, people like that, mothers and fathers and grandparents who have worked hard and sacrificed all their lives and the satisfaction that they get is in seeing their children or maybe their grandchildren or their great-grandchildren live a better life than they did. That is what America is about. That is what we are fighting for.