In a video message released to his supporters on his website this morning, Barack Obama announced he is opting out of public financing. He will be the first candidate ever to rely on private donations to finance his general election campaign, a not unanticipated but controversial move that will give him an enormous advantage over John McCain beginning in August when the general election finance rules take effect. In accepting public financing, the McCain campaign alone -- not the Republican party and not special interest groups or so-called 527s -- will be limited to spending $85 million between the convention and Election Day. The Obama campaign, by rejecting public financing, will be able to spend as much money as it can raise -- and some estimates put that figure as high as $300 million. 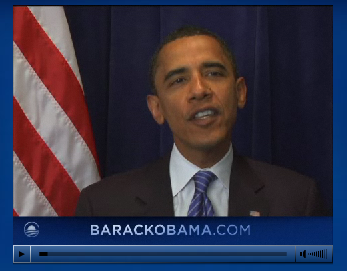 "This was not an easy decision," Obama, tells his supporters.

I support a robust system of public financing of elections. But the public financing system as it stands today is broken and we face opponents who have become masters at gaming this broken system... I am asking you to try to do something that has never been done before... to declare our independence from a broken system and run the type of campaign that reflects the grass roots values that have already changed our politics and brought us this far.

The conventional wisdom has long been that Obama would massively outraise John McCain and bury him during the general election campaign with advertisements and a ground campaign in all 50 states that would expand the electoral map, testing McCain's vulnerability in states like Texas, Montana and Georgia, which are not expected to vote Democratic but might, and so will force McCain to defend his turf with resources he could be spending elsewhere.

Indeed, Obama's prodigious fundraising ability terrifies Republicans. If the more than 1.5 million donors who have contributed to Obama's primary campaign give just $100 to his general election effort, that already represents more than $150 million -- and you can be sure that many will donate much more. Some are already mentioning the possibility of Obama raising more than $300 million just for the general election, a stunning sum to be able to spend in just over two months. With McCain assured of choosing public financing, the mere $85 million he will have to spend in the same time period would make it hard for him to survive the Democratic onslaught in key swing states.

But as the general election is kicking into high gear, it is unclear just how significant Obama's advantage will be. In fact, there are a number of question marks about both campaigns' fundraising plans and abilities.

McCain and the FEC
The Republican's fundraising has been at times too anemic and the GOP base is too disgruntled for him to take the risk of forgoing public financing -- and the fact that no candidate has done so until now underscores the extent of the gamble. The fact is, however, that McCain may well be excluded from accepting public financing. The FEC needs to approve his request and for now that committee still does not have a quorum to take any such decision. The Senate stalemate over new appointments that was at the origin of this situation got partly resolved mid-May, but there still have been no new votes on appointments.

Another question is whether the FEC might attempt to punish the McCain campaign for not using public funds in the primary despite using the promise of doing so to secure grants from banks at the end of 2007 (more details about this controversy here). McCain took advantage of the FEC's inability to rule on the matter because it lacked a quorum to spend money over the limits that are allowed for candidates who accept public financing.

The RNC
Campaign money is flooding to the RNC. Keeping up with tradition, the national Republican party is massively outraising its Democratic counterpart. The RNC finished the month of May with more than $40 million in the bank compared to more than $4 million for the DNC. Since most of the RNC's funds help the Republican nominee in a presidential year, this is giving the Republicans hope that they will remain roughly on par with the Obama campaign. Their calculation is that the current cash-in-hand of the respective campaigns added to that of the DNC and RNC has the two parties at the same level.

This is part of the reason Obama is opting out of public financing. He can raise more then McCain and keep control of the funds.

In any case, there are a few problems with the RNC analysis. For one, the reason Obama does not have that significant a cash-in-hand advantage over McCain right now is that he has been spending massively to defeat Clinton (spending that will incidentally come in handy in the fall since a lot of it consisted of ads in states like PA, OR and even MT, which Obama will attempt to win in the fall). McCain would be looking at a deficit that would surpass $100 million -- potentially even $200 million. There is very little the RNC could do to keep the McCain campaign afloat under this scenario.

Obama and public financing
The final question mark has been answered today. Obama has made the bold move of eschewing public financing, a move the Mccain camp has been dreading and trying to pressure Obama not to take. Indeed, the McCain campaign has long been demanding Obama to respect what they call his "pledge" to take public financing if McCain took public financing. Obama had taken no such pledge but had said that he would "aggressively pursue an agreement." The GOP thought they had him committed, however, and that he would look like a flip-flopper if he reneged. But in the last few months it has become increasingly obvious how big a financial advantage Obama would have without public financing, and today he took the option off the table.

Obama said he would accept public financing if a deal could be struck in which the RNC would curb its spending. "I won't disarm unilaterally," he added. The RNC's massive financial advantage over the DNC would mean that Republicans would have much more money to spend if both campaigns limited themselves to $85 million. Entering a binding agreement to not spend more than his opponent would have constitute a wasted opportunity for Obama and his amazing grassroots fundraising operation, no matter what deal he could have made with the RNC to curb its spending.