Washington's political punditry remains taken with the notion that President Obama is failing to "connect" with average Americans. Yet polling data and political science tell us that Obama's problems have far more to do with public perception of how he is handling the economy, than with his ability to push the nation's emotional buttons.

There's something about Obama that is not connecting with the people. I was trying to think, what is that? And somebody was telling me about this wake and gathering that Richard Holbrooke's widow, Kati, had in New York after he died -- Holbrooke being the Afghan-Pakistan negotiator for Obama who died. And at this gathering, Bill Clinton walked in. And, of course, Clinton always takes over a room. And he put his arm around Kati, the widow, and started talking and saying that Richard Holbrooke had been somebody who always fought, who believed in peace. And somebody who was there told me, suddenly, everyone in the room was involved in Bill Clinton's emotions.

And that's what Obama has to do. He has to find a way to make these things personal, not abstract. He's so cerebral. He's so smart. He appears cool. And he's got to get in there and make those connections with the people in the unemployment line, in the assembly line, in the mountains of Afghanistan.

If we want to know what "the people" think about our presidents, we can do better than a second-hand anecdote gleaned from a private gathering of well connected insiders. We might look instead to the findings of representative opinion polls and the lessons learned from more than 60 years of survey research on how Americans evaluate their presidents.

For example, the Gallup Organization reported this morning that President Obama's current job approval rating (46% approve) is now "higher than approval of two of the last five presidents (Bill Clinton with 40% and Ronald Reagan with 43%) at the same point in their presidencies," according to their daily tracking survey. So despite the reputation for emotional empathy that Clinton solidified during the 1992 campaign, his approval rating was lower at this point in his presidency than Obama's is now.

Part of the answer is that the personal or emotional "connection" that presidents make has far less of an effect on their job approval ratings than the condition of the economy. While political scientists may disagree about which statistic matters most, they collectively point to indicators such as the unemployment rate, job growth, personal income growth, and consumer confidence, as the most powerful drivers of the president's approval rating. Presidential approval typically rises and falls with these statistics.

The point is not that voters monitor economic statistics -- presumably very few do -- but rather that these measures reflect the way Americans experience the economy and how those perceptions affect presidential approval. As Democratic pollster Mark Mellman wrote a few weeks ago, regarding changes in real disposable income, "it's not a statistic people know, or even know about; rather, it's one they feel every time they decide whether to buy or do without, save or invest."

That said, the condition of the economy at this point in 1994 makes Obama's relatively high job rating even more puzzling. As we all know too well, the last two years have witnessed the worst economic downturn since the Great Depression of the 1930s. Consider where things stand now: The Bureau of Labor Statistics estimates the unemployment rate was 9.8% in November, a month in which the economy created just 39,000 new jobs. The Reuters/University of Michigan Consumer Sentiment Index now stands at 74.5 -- an improvement since the low of 55.3 set in November of 2008, but still far lower than any point since the recession of the early 1990s. Disposable personal income growth has been anemic. It grew by just 0.9% in the third quarter of this year (in real dollars), and by just 0.2% in both October and November.

Compare those statistics to what President Clinton faced at this point in 1994, two years into his first term, and a month after Democrats lost control of both houses of Congress, as Republicans gained 54 seats in the House and 9 in the Senate. 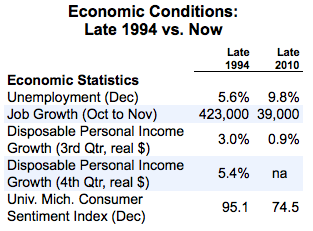 The unemployment rate in November 1994 stood at 5.6%, more than four percentage points lower than it is now. That month, the economy created 423,000 jobs, more than ten times the number created this past November. Michigan's Consumer Sentiment Index stood at 95.1, and disposable personal income grew by a very robust 5.4% in the fourth quarter of 1994.

Thus, despite a far stronger economy in late 1994, Clinton's much lauded communications skills produced a lower job rating than Obama receives now. What does this tell us? At very least, we should assume that there was more to Clinton's relationship with voters 16 years ago than his ability to emote. And while Clinton's approval ratings did rise (and fall) briefly in the immediate aftermath of the Oklahoma City bombing in April of 1995 -- the most famous example of Clinton emotionally connecting with Americans -- the more gradual, sustained increase in his ratings over the course of his remaining six years in office, occurred amidst significant ongoing job growth and economic improvement. 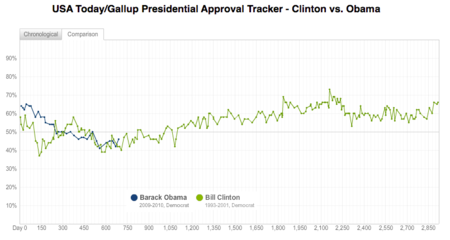 Rather than endlessly speculating about Obama's supposed inability to "connect," we might do better to ask why Obama's approval is as high as it is now, given the poor state of the economy. 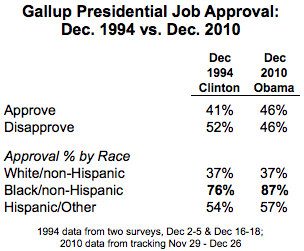 Another reason is that the white/non-Hispanic population is smaller now than it was in 1994. According to Gallup, the white subgroup has narrowed from 83% of their samples in December 1994, to 71% in December 2010.

Americans may well believe that Obama lacks the sort of emotional empathy that has always been Clinton's trademark. But as the NBC News/Wall Street Journal poll found earlier this month, voters have little problem connecting with Obama on a personal level:

[W]hen it comes to the president's personality, voters still like what they see. His personal ratings remain much stronger than his professional ratings.

For instance, he gets his highest marks for having a strong family and family values (74 percent give him a high rating here), being easygoing and likeable (68 percent), being inspirational and exciting (51 percent) and having strong leadership qualities (49 percent).

But his lowest marks come on being a good commander-in-chief (41 percent), sharing respondents' positions on the issues (35 percent), achieving his goals (33 percent), uniting the country (30 percent) and changing business as usual in Washington (24 percent).

In other words, while Americans like Obama, performance matters. Americans will feel better about Obama when fewer of them are on the unemployment lines. We can argue about what the president has done, not done, or still needs to do to turn the economy around, but the notion that his salvation lies in a stronger emotional connection with voters is just silly.

Thanks to Gallup's Lydia Saad for providing approval subgroup data from 1994.