WASHINGTON -- If you're a salaried worker in the U.S., chances are you don't get paid overtime at your job, even if you work 100 hours a week and sleep on a dingy cot at the office. But thanks to looming federal reforms, you may soon find yourself earning time-and-half for all those hours clocked beyond 40 in a week.

Whether you do is ultimately up to President Barack Obama.

Last year, as part of his plan to raise wages through executive action, the president ordered the Labor Department to revise the rules that determine which workers are eligible for overtime pay. Under the Depression-era Fair Labor Standards Act, hourly workers earn time-and-a-half for hours worked beyond 40 in a week. The idea is to give companies a choice: Either pay a premium for having employees work more, or hire more workers and spread the labor around to other people.

But under the law, only certain salaried workers qualify for the overtime premium. The crafters of the law sought to carve out executives and other well-paid, white-collar professionals.

Thanks to inflation, the current criteria -- set by the Bush administration in 2004 -- exclude the vast majority of salaried workers from overtime pay. Over the objections of Republicans and business lobbies, the White House clearly plans to make the overtime rules more inclusive. But how many workers will become overtime-eligible depends on how ambitious the administration feels.

The rules are complicated, but mostly boil down to what's known as the salary threshold. If you earn below a certain amount in a year, you're automatically qualified for overtime, no matter your work duties. Right now, the salary threshold is historically low -- $455 per week, or $23,660 per year -- which is why so few salaried workers qualify. Today, a mere 11 percent of salaried workers fall under the threshold, compared with 65 percent in 1975, according to the Economic Policy Institute. That growing exclusion has been great for business payrolls. For workers' paychecks, not so much.

The higher the administration raises the threshold, the greater the number of workers eligible for overtime. Considering the relatively limited scope of many of Obama's executive orders, that's an extraordinary bit of discretion. Where the threshold is set will ultimately determine how much of the middle class is guaranteed overtime pay.

The Labor Department is expected to release details of the proposal in February. Among some progressives, there are fears the White House is aiming too low.

Ross Eisenbrey, vice president of the Economic Policy Institute, a think tank influential on Democratic policymaking, told HuffPost that his talks with White House personnel lead him to believe they're leaning toward a modest threshold of perhaps $42,000. That would cover 35 percent of salaried workers, according to Eisenbrey's calculations.

Eisenbrey and Jared Bernstein, the former chief economist to Vice President Joe Biden, have advocated for a threshold of roughly $51,000. They base their number on the 1975 threshold, adjusting for inflation as well as the higher education level of the modern workforce. That would cover 47 percent of salaried workers.

The Labor Department's own chief economist, Heidi Shierholz, advocated an even more ambitious figure before she assumed her post at the agency: $58,000, which would cover an estimated 54 percent.

As Eisenbrey has noted, the difference between $42,000 and even $51,000 is vast. He estimated that the higher threshold would make an additional 2.6 million workers newly eligible for overtime.

"We've been working to try to get them to abandon this $42,000 number," Eisenbrey said of the White House. "It's millions of people" in the balance.

Nick Hanauer, the outspoken and progressive venture capitalist, said he also believes the White House is leaning toward the low end of the spectrum. Hanauer penned a piece for Politico magazine in which he said business leaders like himself have enriched themselves at the expense of workers in part through the overtime exemptions. In pushing for a threshold of $69,000, Hanauer argued that restoring overtime pay is key to restoring middle-class wages.

Hanauer, speaking to HuffPost, compared the possibility of a $42,000 threshold with the president's original proposal of a $9 minimum wage, which he was later pressured to scrap in favor of the $10.10 proposal put forth by Democrats in Congress.

"What I think is going on is the White House is negotiating with itself," said Hanauer, who declined to name the White House officials he said he's spoken to about the overtime rule. "They're likely to offer a compromise that they think their opponents won't hate, in this naive view. ... Why not bring the threshold up to where it should be and where it once was, given that the amount of resistance you'll run into is equal in either case?"

A White House spokesperson didn't respond to a request for comment. A spokeswoman for the Labor Department did not address the threshold issue, saying the agency will "continue working diligently to construct an updated overtime rule that reflects the president’s directive and the input we’ve sought from a wide array of stakeholders, including workers and their employers."

Asked what sort of threshold the U.S. Chamber of Commerce was seeking, Marc Freedman, the lobby's director of labor law policy, said in an email that the group wouldn't speculate, "nor are we interested in negotiating the threshold in the press."

Businesses have good reason to worry about the overtime reforms. Thanks to the exemptions, many companies can squeeze however many hours they want out of workers without having to pay anything beyond the base salary. That will soon change.

Insurance companies, for one, are routinely sued by workers who say they've been unfairly carved out of overtime pay. That's how a rider came to be inserted into the recent spending bill signed by Obama, stipulating that insurance claims adjusters working in the aftermath of a disaster not be eligible for overtime. That clarification may save insurance companies millions of dollars.

According to Democratic staffers, the rider was pushed by Sen. Richard Shelby (R-Ala.). Shelby's largest campaign contributor since 2009 has been insurance giant Travelers, according to the Center for Responsive Politics.

As HuffPost reported in 2013, the overtime exemptions are at the heart of the retail labor model, particularly for the nation's tens of thousands of dollar stores. Store managers who perform manual labor are given such a small payroll budget that they end up working 60 or even 80 hours a week for salaries in the $30,000s. As exempt employees, they receive no overtime pay.

Dawn Hughey, a former Dollar General store manager profiled by HuffPost, submitted testimony to the Labor Department in support of reforming the overtime rules. Hughey said she worked so many extra hours at the store that when she did the math, she was earning the same hourly rate as her underlings.

"Managers have no quality of life when it comes to family or social life," Hughey wrote. "If you do get out of work at a decent hour, you take the stress and worry home with you."

The overtime reforms will force businesses like Dollar General to face new choices and ultimately pay additional wages. The only question is how many middle-income workers will be covered by the reforms.

"The whole point of the legislation was to help balance work with outside life and to make it more expensive to work folks beyond what is widely agreed upon to be a reasonable work week," said Bernstein, now a senior fellow at the Center on Budget and Policy Priorities. "It doesn't mean employers can't use people past 40 hours. It means they'll have to pay them time-and-a-half. That's really dropped out of the culture in a way that's damaging to the middle class." 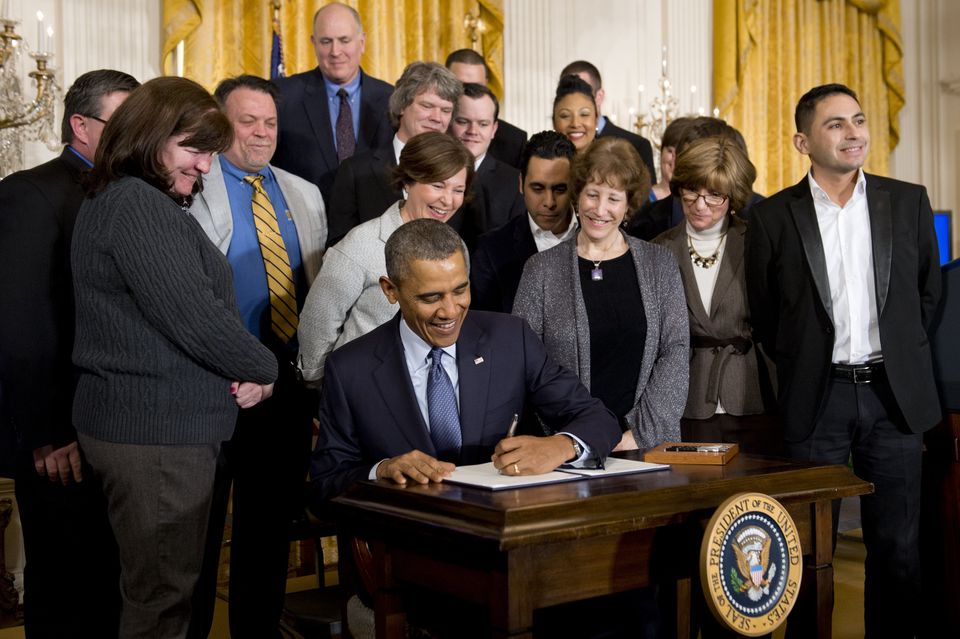 1 / 5
US-POLITICS-OBAMA-OVERTIME
US President Barack Obama signs a Presidential Memorandum increasing workers' overtime protections during an event in the East Room of the White House in Washington, DC, March 13, 2014. The Memorandum instructs the Secretary of Labor to update overtime regulations, including increasing the number of employees that are eligible to earn overtime pay. AFP PHOTO / Saul LOEB (Photo credit should read SAUL LOEB/AFP/Getty Images)
Getty Images