WASHINGTON -- President Barack Obama said his administration would soon release details of a highly anticipated reform to the nation's overtime rules, telling The Huffington Post on Friday that many Americans were being "cheated" out of time-and-a-half pay.

"What we’ve seen is, increasingly, companies skirting basic overtime laws, calling somebody a manager when they’re stocking groceries and getting paid $30,000 a year," Obama said in a sit-down interview with HuffPost. "Those folks are being cheated."

A little over a year ago, Obama directed the Labor Department to revise rules that determine who's eligible for a pay premium when they work more than 40 hours in a week. Current rules, implemented by the George W. Bush administration, are ungenerous to workers, and Obama clearly wants to expand them.

The question now is just how aggressive the White House will be and how willing it is to rankle the business lobby.

The key to the reforms is the so-called salary threshold. Salaried workers who earn less than a certain amount of money in a year are automatically entitled to time-and-a-half pay, no matter their job duties. Right now, that salary threshold is $23,660. The administration will raise that threshold to make more workers eligible for overtime. The higher the threshold, the more employers will have to face a choice: Either don't allow workers to exceed 40 hours a week or start paying them for the extra time they work.

Asked what sort of number he had in mind, Obama declined to say.

"I’ll tell you when we announce it," the president said. 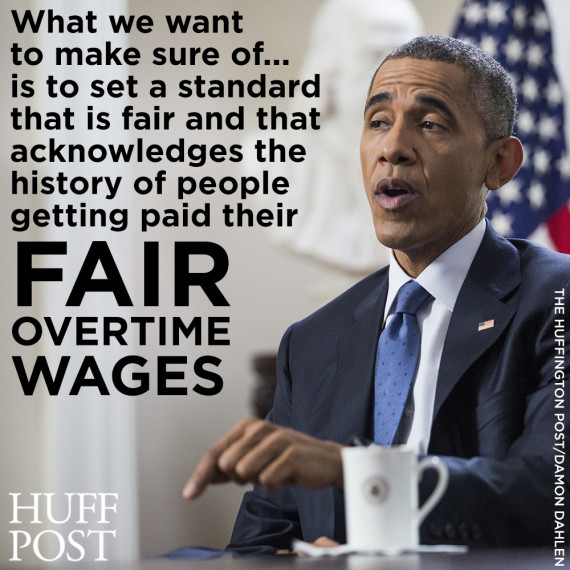 Progressive Democrats have been urging the White House to be bold. Senate Democrats sent a letter to the administration in January recommending a salary threshold of $56,680, which would qualify roughly half of salaried workers for overtime pay. Some House Democrats have pushed for a more ambitious threshold of $69,000, which would cover an estimated 65 percent of salaried workers, according to the Economic Policy Institute.

As of 2013, just 11 percent of such workers were overtime-eligible under current rules, compared with roughly 65 percent back in 1975.

One problem, alluded to by Obama, is that companies can dodge overtime pay by classifying workers as managers, even if those workers spend most of their days doing manual labor. So long as their salaries are above the low threshold, employers can work them as long as they want while paying only the base salary. Such practices are rampant in the retail industry, and particularly in the world of dollar stores, as HuffPost reported in 2013.

Obama said his administration has been working on the overtime rule with Labor Secretary Tom Perez, and details should be released "relatively soon."

The goal, he said, is "to set a standard that is fair and that acknowledges the history of people getting paid their fair overtime wages."