Wednesday morning, U.S. President Barack Obama arrived in Israel to much fanfare. He said that he has come to listen. One place he should start is the Palestinian village of Nabi Saleh, located in the Israeli-occupied West Bank.

I visited Nabi Saleh last week as part of an Amnesty International research mission to the West Bank. The village sits atop a hill, facing the illegal Israeli settlement Halamish. The settlers of Halamish, like so many other Israeli settlers in the Occupied Palestinian Territories (OPT), are backed by the lethal force of the Israeli army.

For protesting against the settlement, the residents of Nabi Saleh have paid a heavy price. I spoke with village resident Bassem Tamimi, a man who Amnesty International previously declared a prisoner of conscience when he was imprisoned by Israel for involvement in peaceful protests. During Bassem's most recent jail term, his brother-in-law Rushdi Tamimi, 31, was shot by Israeli soldiers at another protest in November 2012 and died days later in a hospital. In December 2011, another member of the village, Mustafa Tamimi, died after being hit in the face by a tear gas canister fired at close range from an Israeli military jeep.

The village of Nabi Saleh is home to some 500 members of the extended Tamimi family. The villagers say that the expanding Israeli settlement of Halamish has blocked their access to a nearby source of water, a spring. For holding weekly protests against this settlement, they have suffered greatly at the hands of the Israeli Defense Forces.

Israeli military law imposed in the occupied West Bank places sweeping and arbitrary restrictions on freedom of expression and assembly. This makes any unauthorized peaceful protest by Palestinians a criminal offence. Palestinians engaging in such protests face arrest and excessive force from the Israeli military on a regular basis. 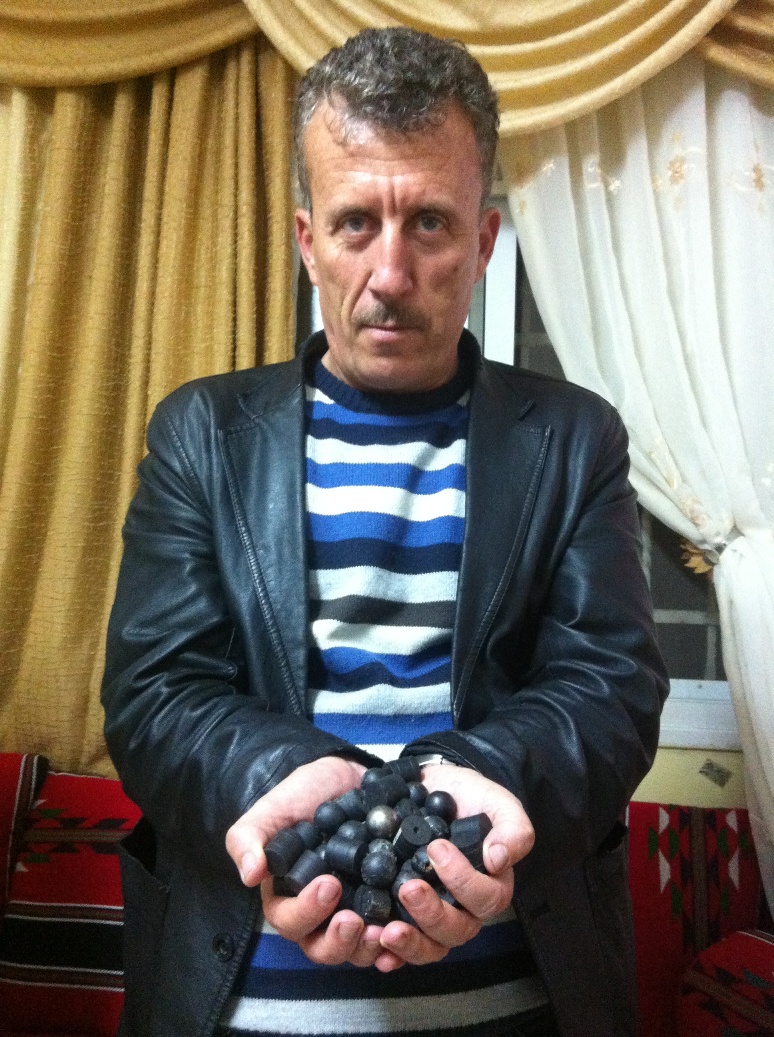 All of this becomes quite clear when visiting homes in Nabi Saleh. Bassem Tamimi filled his hands for me with some of the plastic and rubber-coated bullets he has collected which were fired by Israeli forces in the village. Coatings aside, each bullet I examined had a hard metal interior.

The Tamimis have experienced this tragedy because they dare to protest against Israeli settlements. Since 1967, Israel has established some 150 illegal settlements in the occupied West Bank, including East Jerusalem. The settler population has now grown to over half a million Israelis.

In opposing the settlements, the residents of Nabi Saleh have international law on their side. A policy of settling civilians in occupied territory -- such as Israel's settlement policy -- is a serious violation of the laws of war. It can be prosecuted as a war crime under the statute of the International Criminal Court.

While in Israel and the West Bank, President Obama would be wise to listen to Bassem Tamimi and other Palestinians about life in the shadow of settlements and the Israeli army. But listening is not enough. The U.S. government must actively support Palestinians in their opposition to these illegal Israeli policies.

This means that the Obama administration must insist on a complete freeze on Israeli settlement construction, instead of calling on Palestinians to resume negotiations with Israel first, as Obama did earlier today. This would be a first step to the total evacuation of all Israeli settlements from the Occupied Palestinian Territories, including East Jerusalem.

Without such a clear approach, the daily human rights violations and displacement that Palestinians face because of Israeli settlements will only get worse. Israel's new defence minister, Moshe Ya'alon, is reported to oppose any limits on settlement construction. Israel's new housing minister, Uri Ariel, is himself a settler. Without significant international pressure, Amnesty International fears that the new Israeli government will simply continue building illegally on occupied land and using excessive -- and sometimes lethal -- military force against Palestinians who get in the way.

President Obama must move beyond diplomatic pleasantries during his visit to Israel and the West Bank. He should bluntly address Israel's settlement policy and the devastation to Palestinian life that lies in its wake. Bassem Tamimi, the villagers of Nabi Saleh, and Palestinians throughout the Occupied Territories deserve no less.