When Mexican President Enrique Peña Nieto last met with President Obama he was riding a wave of legislative success and media adulation, but terrifying events in 2014 have changed all that. 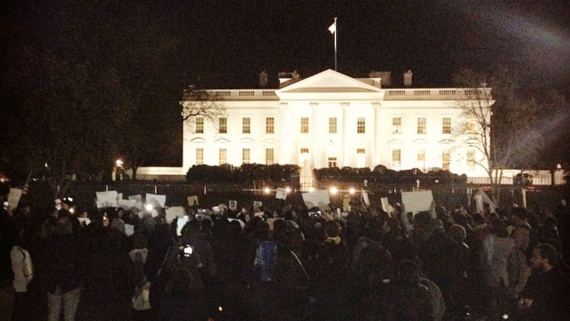 The two presidents are meeting again this week after alarming revelations about of murders and abductions in Iguala and elsewhere in Mexico involving police, army, and criminal organizations connected to high-ranking politicians have shaken the country and fundamentally altered the political terrain of the bi-national relationship.

Word quickly spread about what had happened to the students, and as investigations got underway, other state linked criminal atrocities came to light. Influence peddling allegations against Peña Nieto, involving apparent kickbacks to his wife and finance minister from a firm bidding on a multi-billion dollar high speed rail contract, added fuel to the fire. Hundreds of thousands of Mexicans joined the families of the disappeared in marches, calling for the return of the missing students.

When an incompetent and deceitful federal investigation concluded without delivering either the missing students or the truth about what had happened to them, anger boiled over and calls for Peña Nieto's resignation rang out in plazas across Mexico.

This week, while the two Presidents meet at the White House, protestors will gather across the street in Lafayette Park and in cities around the United States echoing demands from Mexico that the United States end drug war military, police and security aid. Protestors say that rather than helping, U.S. aid perpetuates a system of impunity that shields well-connected criminals while leaving ordinary citizens defenseless, vulnerable, and without genuine recourse to justice.

The protestors are right. The drug war has failed and U.S. aid to Mexico has long since crossed the line between honest support for genuine solutions and disingenuous complicity with what has become a human rights disaster. Yet, despite compelling evidence that the road we are on does not lead to peace, promote safe communities, or serve the true security interests of United States, President Obama is unlikely to change much as long as drug war ideology and economic interests continue to trump common sense and human rights in the making of U.S. policy.

Yet, by normalizing relations with Cuba last December, President Obama showed he could think outside the box, challenge foreign policy dogmas, and win broad support in Latin America. But pulling back from Peña Nieto and distancing the U.S. from the oligarchy that rules our NAFTA partner would be far more challenging.

In the case of Mexico, business as usual means U.S. tax dollars supporting the criminally infiltrated institutions of a Mexican government that is either unable or unwilling to root out horror and impunity within its own ranks. Something has to change.

Mexico is deeply wounded, but more military aid from the United States is not the answer. Instead of doubling down on the violent and long-failed drug war, we should be discussing alternative ways to weaken criminal mafias.

One way to drain the profits from drug traders is to selectively regulate drugs using public health criteria that respect human rights and minimizing harm to individuals, families, and communities; much like we already do with alcohol. But that might take years, and Mexico needs help now.

Some are calling for vigorous enforcement of laws already on the books like the Leahy Law that curbs the delivery of aid to military units tied to human rights abuses.

A full suspension of military cooperation pending drastic changes would send a wake up call to Mexico's military and political class and give a vote of confidence to Mexico people as they struggle to right things.

Above all, we cannot continue business as usual.