In Florida for his bus tour on Sunday, President Barack Obama made an unannounced stop at Big Apple Pizza and Pasta in Ft. Pierce. There, the shop's owner, Scott Van Duzer, lifted the president off the ground: 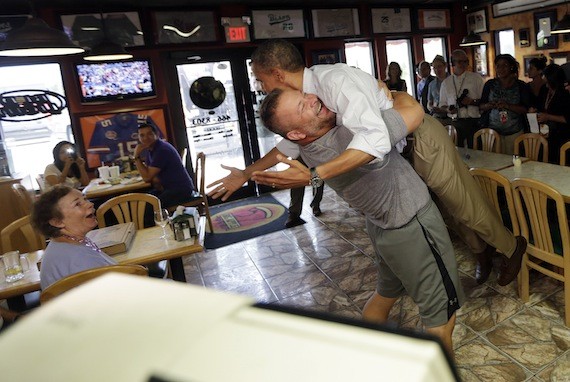 Obama entered the shop saying, "Scott, let me tell you, you are like the biggest pizza shop owner I've ever seen," according to a White House pool report.

After Obama was lifted up, he said "Look at that!" Man are you a powerlifter or what?"

He continued, according to the pool, talking about Van Duzer's big muscles.

"Everybody look at these guns," he said. "If I eat your pizza will I look like that?"

Van Duzer, by the way, is a registered Republican who voted for Obama in 2008 and says he will do so again in November.