For the third year in a row, President Barack Obama celebrated Small Business Saturday with his daughters by visiting a local bookstore.

According to pool reports, Obama chose Politics & Prose in northwest Washington, D.C. as his 2013 destination. Among the titles purchased: "Harold and the Purple Crayon," "The Kite Runner," and "Collision Low Crossers: A Year Inside the Turbulent World of NFL Football." 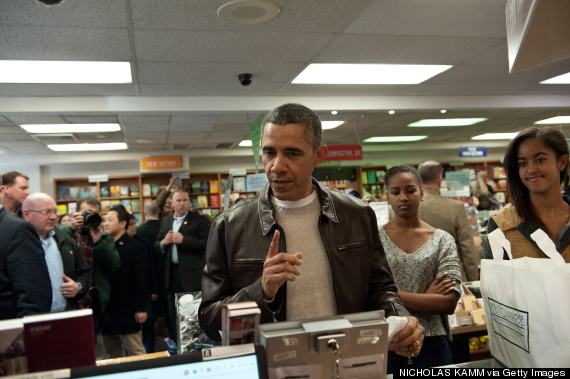 U.S. President Barack Obama speaks to a cashier as he pays for books with daughter Malia (R) and Sasha (C) at the Politics and Prose bookstore in Washington on November 30, 2013 as part of Small Business Saturday. (NICHOLAS KAMM/AFP/Getty Images)

The 2011 stop at Kramerbooks included a variety of selections, ranging from "The Invention of Hugo Cabret" to "Diary of a Wimpy Kid: Cabin Fever." During the 2012 stop at One More Page Books, Obama purchased 15 children's books that were given out as Christmas gifts to family members.

Politics & Prose has been a stop for the Obama family before. Back in May 2013, First Lady Michelle Obama was treated to a packed house for her book-signing of "American Grown: The Story of the White House Kitchen Garden and Gardens Across America."