Friday’s protest came as efforts toward passing a comprehensive immigration reform bill in Congress appeared to sputter, with House Republicans symbolically passing an amendment that would roll back the Obama administration’s policy of deferring deportation for people brought here illegally as children.

“Why should my family still have to live in fear of being deported at the same time that Congress is talking about passing immigration reform?” Myisha Arellano, an undocumented member of the Immigrant Youth Coalition originally from Mexico, said in a press statement. “The President can’t just give speeches about reform when he’s also deporting our families in record numbers. He could stop our suffering and stop deportations with the stroke of a pen.” (Story continues below image) 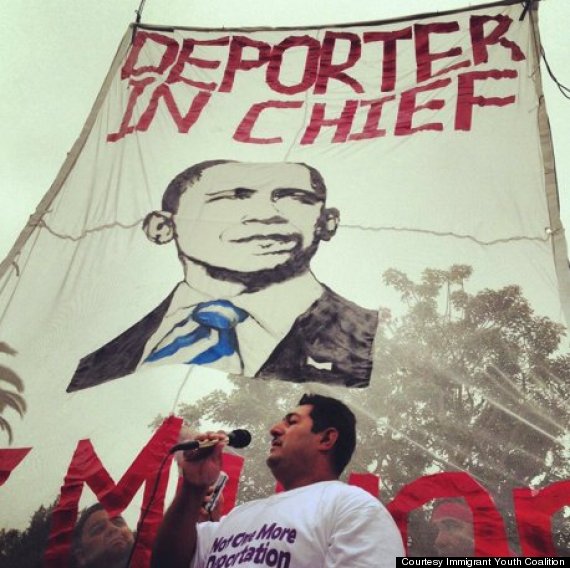 Obama arrived in Los Angeles on Friday, the second day of a California fundraising trip.

Some 200 protesters gathered on a Santa Monica street corner, waiving a sign with Obama’s image reading “Deporter in Chief,” California daily La Opinión reports. The protesters took to the streets once again on Friday.

It’s not the first time Obama’s faced protests from immigrant advocates over his deportation record. Police arrested a dozen protesters for blocking traffic outside a fundraising event attended by Obama in May.

If deportations continue at the current rate, Obama will top 2 million by 2014 -- more than all deportations prior to 1997 combined.

6 Misconceptions About The Border