WASHINGTON -- President Barack Obama said Friday that the swift reaction from the University of Oklahoma against fraternity brothers singing a racist song shows how far the country has come.

"I don't think this is the first time that somebody at a fraternity has done something stupid, racist, sexist. It won't be the last," Obama said in a sit-down interview with The Huffington Post. But he praised the speed with which OU President David Boren and the student body moved to condemn the offensive behavior by members of Sigma Alpha Epsilon.

"What was heartening was the quick response from President Boren, somebody who I know well and I know who has great integrity," Obama said, noting as well the "quick reaction from the student body."

"The way we have to measure progress here is not, 'Is there ever going to be an incident of racism in the country?' It's, 'How does the majority of our country respond?' And on that front, there's no doubt that the overwhelming number of students at the University of Oklahoma, and around the country, think that kind of behavior is deplorable and don't accept it," the president said. 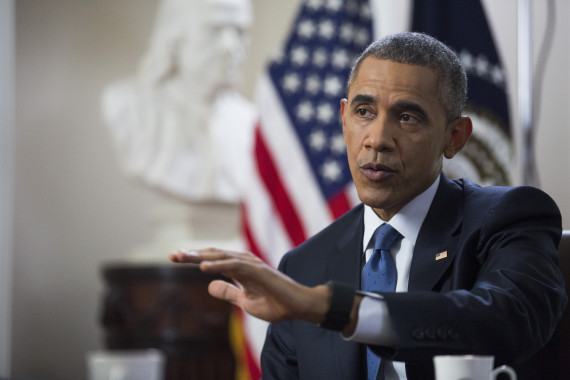 The national SAE organization shut down the Oklahoma chapter a few hours after a video of fraternity members singing a racist song surfaced on March 8. The next day, Boren said the frat members involved were "disgraceful" and implied they were "bigots." He ordered them to vacate their fraternity house and moved to expel two members for their "leadership roles" in the singing of the offensive song. Meanwhile, students marched on campus against the casual use of racial slurs.

"Frankly, 30 years ago or 40 years ago, there might have been a different reaction and more tolerance for that kind of racist chant," Obama said Friday.

Colleges have seen additional controversies around racial issues in just the last week. On Wednesday, a black University of Virginia student was bloodied during an arrest by state liquor agents, prompting outrage among students and university officials. On Thursday, a fraternity at North Carolina State University was suspended after what appeared to be the frat's pledge book surfaced, containing such offensive statements as, "That tree is so perfect for lynching."

Obama himself dealt with racial tensions on campus as the first black president of the Harvard Law Review in 1990. Back then, he told The New York Times, ''I personally am interested in pushing a strong minority perspective. I'm fairly opinionated about this." However, some white students thought he focused on race too often, while black peers criticized him for not appointing more minority students to top-ranking positions, the Los Angeles Times reported.

Obama told the LA Times in 1990 that he had only decided to run for the law review presidency after a conversation with a black friend. He said he later realized that his election "was more than just about me. It was about us. And I am walking through a lot of doors that had already been opened by others."