On the eve of last Tuesday's national election, I forced myself to do something I hadn't done during the entire presidential campaign: I watched Fox News.

I was astonished. I had kept close tabs on all of the major aggregate polling data, as well as paying close attention to gambling sites out of both Las Vegas and England; I like to joke with my friends that while the pollsters live to breathe another day (even if they are wrong), the bookies in Vegas and Britain get shot if they make a mistake. So when I watched bobbing head after bobbing head on Fox predict a Romney victory (and a landslide at that!), I was more than a little flummoxed -- and did whatever I could to get my bets down.

That said, the outcome of the 2012 presidential was not a fait accompli, as many are now arguing -- not by a long shot. This election could have gone either way. Anyone who thinks the Obama victory was inevitable or predetermined is in a worse state of denial than the hucksters at Fox News: Go directly to jail, do not pass "Go," and place 200 bucks in my online betting account. Obama was vulnerable for a variety of reasons -- the unemployment rate; the stagnating economy; his clear distaste for the electoral process (no Bill Clinton he) -- and unlike in 2008 when structural factors leaned heavily against the Republicans (and their choice of Sarah Palin sealed the deal against them), the Republicans had a real shot this time around. And a good shot at that. Obama was on the ropes. In an article appearing in The New York Times last year, Nate Silver (whose numbers are generally spot on, even if his reasoning is not) had asked "Is Obama Toast?" and declared him an "underdog." 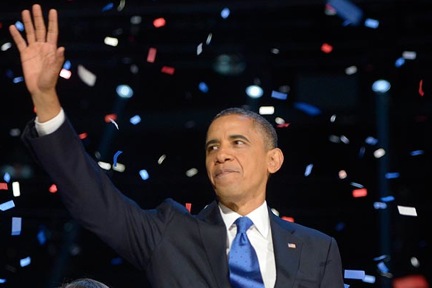 All one needs to do is look at the campaign polling in early October of this year, after Obama flailed miserably in the first debate. The Obama campaign went into virtual free fall -- for nearly two full weeks. More significantly, the Romney campaign was ascendant. For the first time in the campaign -- and perhaps it was the only moment -- Romney had connected with the American people in a meaningful way. Obama appeared flat and, even, uninspired; Romney came across as vital and three-dimensional. Most importantly, he appeared presidential. At that point, he could have won the election. Easily.

1. The Republican War on Women. If one takes a close look at the numbers -- especially those in swing states -- it becomes clear that the real "firewall" for Obama was not the auto bailout in the industrial Midwest, but moderate and independent women who are never going to vote Republican because of the ugly and vicious assault on women's reproductive rights being waged by the cultural warriors in the Republican Party. The likes of GOP Senate candidates Todd Akin and Richard Mourdock opining about "legitimate rape" stuck fatal daggers in the Romney campaign. And Romney's own personal history on this issue as a Mormon bishop prevented him from distancing himself completely from their taint.

2. Republican Racism. In the aftermath of the Republican Convention, I called the GOP gala in Tampa a "Gathering of Pasty White People" and later said it looked like a gaggle of "Pillsbury Dough Boys." One right-wing commentator went apoplectic. But that's exactly what it looked like and, more importantly, precisely what every campaign stop for Mitt Romney looked like. America is now a diverse cultural and ethnic mosaic, and any party that blows racist dog whistles (including Romney's infamous "47 percent" rambling) is doomed for demise. End of discussion.

3. The Obama campaign was brilliant. While their quarterback can be a bit erratic at times, their blocking and ground game are unsurpassed. Sorry to use a sports metaphor here, but think Green Bay Packers circa 1965. Jim Messina, David Axelrod, Jen Dillon O'Malley, Stephanie Cutter,et al are absolutely unequaled as political strategists. While Romney put together a credible team, his was no match for Obama's. In the end, that's the definitive variable. Romney's field campaign was overrun.

4. Hurricane Sandy and Chris Christie. Pundits on the right have been over-blowing this factor (pun intended), while those on the left have been dismissing it. The truth is we'll never know how significant it was statistically -- polling numbers can never get at an issue like this -- but the fact remains that while Obama was clearly ahead going into the final weeks of the campaign (and his momentum was steady with Romney's at this point), Sandy closed off a path for a last-minute Romney surge.

Sandy reminded independent and undecided voters about the importance of the federal safety net; it highlighted Romney's opposition to FEMA; it further underscored Romney's wishy-washy positions on a host of positions; it allowed Obama to look presidential and rendered Romney as a bystander; and it opened the door for what I called Chris Christie's "turn" as Marcus Junnius Brutus. Game over. (And you can bet there's a larger story here re: Christie and the Romney campaign. I guess we'll have to wait for Game Change: The Sequel.)

5. Clint Eastwood. Conversely, in the case of Eastwood's pathetic, self-indulgent turn at the podium during the final hour of the Republican National Convention, the numbers don't lie; moderate and independent voters were clearly turned off by his blithering empty-chair schtick. Moreover, the Republicans had a superb video biography of Romney that could have been seen by a national audience, setting the stage for Rubio (who was great) and then Romney (who was more than credible). Instead, the soundbites and headlines the following day were all about Eastwood. As a result, the expectant bounce after the convention was smaller and had less traction than it should have. That may have been the absolute dumbest move of the campaign.

6. Paul Ryan (and Joe Biden). Vice-presidential candidates don't often play a major factor in the race. But once Paul Ryan got busted for lying about his marathon time, along with his budget numbers, he was destined for a minor role in the campaign. Moreover, during the middle of Obama's free fall, Biden played hardball in his debate with Ryan (who came off as a numbers nerd) and stopped the Romney-Ryan momentum dead in its tracks. Ryan was an absolute non-factor: he probably cost Romney Florida and couldn't even deliver his home state of Wisconsin (where the GOP ticket lost by a stunning 6.7 percent).

7. Bill Clinton. Clinton's speech at the Democratic Convention was a tour de force of 21st century political oratory. But if you caught footage of Clinton on the stump and in rope lines in the days and weeks afterwards, you were watching the Michael Jordan and Joe Montana of modern-day political campaigners. I believe that Clinton's fires burned even brighter for victory than did Obama's. Moreover, the Republicans had no one -- and I mean no one -- who could match Clinton in the hustings. (That is unless you count George W. Bush delivering a speech to investors in the Cayman Islands only a few days before the election.) Dollar Bill was clearly a factor, and a definitive one at that.

8. Fox News. Like I said, I can't tolerate watching this crew during the regular season, and one night of viewing was enough to turn my stomach for at least four more years. But it should be clear now that the Fox mainstays like Hannity and Rove and Morris (what a piece of work he is) are so out of touch with reality that any campaign based on their political perceptions is doomed for failure. And does Sarah Palin -- who after four years of steady embarrassment and who still can't string a sentence together -- really have a place in the national conversation? Certainly Roger Ailes can no longer think that.

9. Reince Priebus. This guy must turn off about 99 percent of the entire electorate, Democrats and Republicans alike. Even my son's goldfish can't stand him. Here's a guy who couldn't last one second in a working-class bar anywhere in this country. And he's the mouthpiece for a major political party? Whew. (One of my favorite moments in the campaign was when Chris Matthews chewed him up and spit him out for playing the race card.)

10. Obama. In November of 2006, Axelrod drafted a memorandum in which he was brutally direct with his candidate: "I don't know whether or not you are Muhammad Ali or Floyd Patterson when it comes to taking a punch." The fact of the matters is that in terms of campaigning, Obama is, indeed, more like Patterson than Ali. And fortunately for Obama, McCain and Romney were more like George Chuvalo and Ingemar Johansson than either Sonny Liston or Joe Frazier. But when the chips were down, Obama stepped up. In debates two and three (a la Patterson against Johansson), he pounded Romney to the canvas. His victory speech Tuesday night was one of the best of his life. He must feel like the weight of the world is off his back with his re-election in the rear view mirror. It was a reminder of how powerful he can be when he puts his heart into it -- and how equivocal he can come across when he doesn't.

All of these factors added up to less than a two-percent differential nationally but a landslide electorally. The Republicans will continue to blame and finger-point and whine in the ensuing weeks and months ahead. I'm not sure they have any adults left in the house. The Republicans have some serious soul-searching to do -- and they will have to be more honest with themselves than they were at any time leading up to Election Day -- or the White House will seem mighty distant again come 2016.