Tomorrow, Election Day, we have an extraordinarily important decision to make. Many look at the economy and wish the recovery were happening more rapidly. Some would like to see a larger return on their stocks. And a select few look at their families and hope each day for the same protections that almost every other family in the country currently has.

You might remember a letter posted here last week from young Sophia Bailey Klugh. Ten-year-old Sophia penned a letter to President Barack Obama in which she told the president how happy she is that he agrees with her on the topic of marriage equality. You see, young Sophia has two dads. She went on to ask the president an important question:

I am so glad that you agree two men can love each other because I have two dads and they love each other, but at school kids think that it's gross and weird, but it really hurts my heart and feelings.... If you were me and you had two dads that loved each other and kids at school teased you about it, what would you do?

Well, lo and behold, in the middle of his fight to be reelected, the president took some of his important time to share a little advice with a little girl:

Thank you for writing me such a thoughtful letter about your family. Reading it made me proud to be your president and even more hopeful about the future of our nation.

In America, no two families look the same. We celebrate this diversity. And we recognize that whether you have two dads or one mom what matters above all is the love we show one another. You are very fortunate to have two parents who care deeply for you. They are lucky to have such an exceptional daughter in you.

Our differences unite us. You and I are blessed to live in a country where we are born equal no matter what we look like on the outside, where we grow up, or who our parents are. A good rule is to treat others the way you hope they will treat you. Remind your friends at school about this rule if they say something that hurts your feelings.

Thanks again for taking the time to write me. I'm honored to have your support and inspired by your compassion. I'm sorry I couldn't make it to dinner, but I'll be sure to tell Sasha and Malia you say hello. 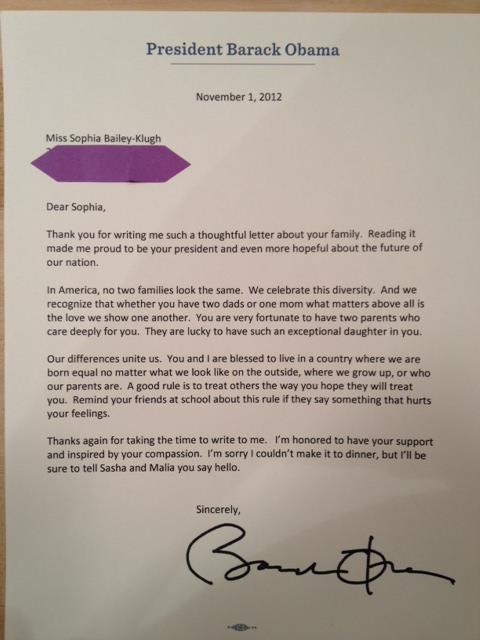 Gov. Mitt Romney's campaign recently stated that he believes that the ability of gay and lesbian families to visit one another in the hospital is a privilege, not a right. Additionally, he has spoken out against gay parents adopting children. Finally, the governor has pledged to write discrimination against LGBT people into the U.S. Constitution.

I hope that young Sophia wakes up Wednesday morning to find that there's someone in the White House who believes that her family should have the same protections as every other family in the country.

How might Mitt Romney have responded had Sophia written to him? The Nerve has an idea.

Update: Some have questioned the validity of the letter due to the fact that it is not on White House stationary. On background from a campaign spokesperson, I can confirm the letter is in fact authentic.