DENVER, Colo. -- Republican presidential nominee Mitt Romney spent much of his first presidential debate Wednesday walking back some of his core primary positions and highlighting similarities with President Barack Obama -- from keeping bank regulations in place, bringing in more teachers, maintaining taxes on the wealthy, to making sure those with pre-existing conditions have health insurance.

But the president failed to respond effectively, drifting into his professorial demeanor and barely attempting to veil his annoyance with Romney. It wasn't pretty, but Romney won, according to the general consensus among reporters and political operatives after the debate at the University of Denver.

Romney appeared more relaxed than Obama, who spent much of his time explaining policies he would likely rather be done selling by now. He hardly looked Romney in the eye during the debate.

There is one critical caveat, of course, in determining the winner of a debate: It's difficult to know how the millions of voters, whose prisms are radically different than those of mainstream reporters, took in the debate. But, at minimum, Romney cleared the most critical bar, by appearing presidential.

Still, one issue continued to plague Romney: details. While he said he would end Obama programs, he was vague on how he would do so without eliminating a host of components he pledged to keep.

"At some point, you have to ask, is he keeping all these plans to replace [programs] secret because they're too good?" Obama said. "Families are going benefit too much from them?"

The debate was the first of three presidential debates, this one with a focus on domestic policy. Obama and Romney each went into the debate attempting to tamp down expectations, insisting their opponent might have a bit of an edge and that they just hoped to do well.

Romney had more to prove, with Obama leading by large margins in swing states, according to a number of polls. Obama also has had more time to lay out his policy plans and present himself to the American people, while Romney is still being pressed for more specifics.

Romney did give one specific on taxes, making the promise that he will cut taxes only to the extent it doesn't increase the deficit. Romney said he doesn't want to cut taxes by $5 trillion, a widely reported figure, and put a strict limitation on how much he would actually lower taxes.

"If the tax plan he described were a tax plan I was asked to support, I'd say, 'Absolutely not,'" Romney said. "I'm not asking for a $5 trillion tax cut. What I've said is I won't put in place a tax cut that adds to the deficit. ... I've got five boys. I'm used to people saying something that's not always true, but just keep on repeating it and ultimately hoping I'll believe it."

"Now ... he is saying that his big bold idea is 'never mind.' The fact is, if you are lowering the rates the way you describe, governor, it is not possible to come up with enough deductions or loopholes," Obama said. "It is math. It is arithmetic."

Romney insisted a few times that he would leave things as they were, or that he agreed with Obama. He said he wouldn't cut funding for education and that he agrees more teachers are needed. Romney also said he and Obama agree that Social Security should not be changed for current seniors, effectively taking it off the table, although the two still attacked each other on the issue of Medicare. Romney also said the two men agree that young people should be kept on their parents' insurance plans, even if he successfully repealed Obamacare.

He also said he supports another Obamacare component: requiring insurers to cover people with pre-existing conditions. Romney said he would continue that policy, a key part of Obamacare that isn't actually part of his plan. Romney's health care plan would require insurers to cover pre-existing conditions if they were switching from one insurer to another -- but would do nothing for those trying to get insurance who do not currently have it.

But there still weren't many details, something Obama pointed out. A few minutes after jabbing Romney on his math, Obama said the public can visit his website to see the specifics of his deficit-cutting plan, alluding to vagaries in Romney's deficit reduction promises.

Romney pointed out, rightly, that Obama didn't get behind the Simpson-Bowles deficit reduction bill -- which his vice presidential pick, Rep. Paul Ryan (R-Wis.), voted against -- even though he admitted he doesn't support it either.

"The president should have grabbed that," Romney said of deficit reduction, specifically citing the plan.

"Do you support it?" moderator Jim Lehrer of PBS countered.

"I have my own plan," Romney responded. "I think the president should have grabbed it. If you have some adjustments, make it, take it to congress, go for it."

Romney, when it came to bank regulation, played it both ways. He charged Dodd-Frank with leading to community bank closures, while also complaining that elements of it hadn't been implemented fast enough. He praised some parts of it, criticized others, but declined to get specific.

Both candidates seemed a bit touchy, especially with the moderator. Obama kept talking at one point when Lehrer said his time was up, saying, "I had five seconds before you interrupted me." Romney made even more of a fuss about the times, insisting on the first question that he get the last word, and refusing at several points to stop talking when asked. He also promised to cut funding to PBS, with an apology to Lehrer.

The debate ended with another attack from Obama over how Romney and Ryan would run the government. Romney promised to work with Democratic and Republican leaders "on day one," or the day after his election, to work to collaborate, an idea Obama mocked.

"I think Governor Romney is going to have a busy first day because he's also going to repeal Obamacare," Obama said. "Which will not be very popular with Democrats as you're sitting down with them." 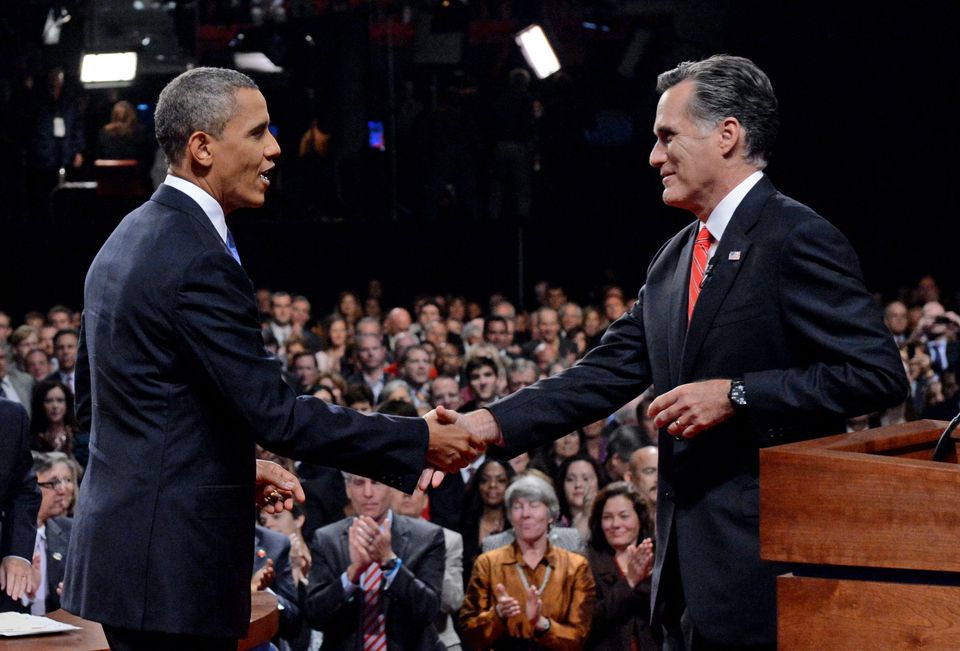