WASHINGTON -- Political junkies have been watching for any signs that the perceptions of a lackluster performance by President Barack Obama in Wednesday night's debate have translated into polling gains for Republican nominee Mitt Romney.

For the moment, the only evidence of a Romney bump comes from a handful of one-night, automated, recorded-voice surveys released Friday whose methods and timing may exaggerate the change. At the national level, the daily tracking surveys are still based on interviews conducted mostly before the Denver debate.

Friday's update of the Gallup Daily tracking poll shows Obama leading by five percentage points (50 to 45 percent), one point better for the president than the previous day's release. But Gallup reports numbers on a seven-day rolling average, so the post-debate interviews account for just one out of every seven interviews in its latest release.

The daily Rasmussen Reports automated phone survey reports results based on a three-day rolling average. Although a third of the interviews in its Friday release were conducted after the debate, Rasmussen shows no change. Obama leads 49 to 47 percent, the same two-point margin as the day before and a point better than earlier in the week.

The Reuters/Ipsos daily tracking poll released Friday shows more of a shift. Their interviews, conducted from Monday through Friday of this week, show Obama's lead at just two points, 46 to 44 percent -- down from a margin of 48 to 43 percent.

Ipsos interviews voters over the Internet, with respondents selected from a non-random pool of individuals who volunteered to complete surveys. Internet-based polls rely on statistical adjustments to produce a representative sample of likely voters.

Within the swing states, the only fresh data come from one-day, automated, recorded-voice polls conducted by both Rasmussen and We Ask America (a subsidiary of the Illinois Manufacturers Association) in Florida, Ohio and Virginia. Generally, pollsters prefer to call over several nights in order to make multiple attempts to interview voters who might not be at home or otherwise available on any one night. So these Rasmussen and We Ask America results should be interpreted with caution. 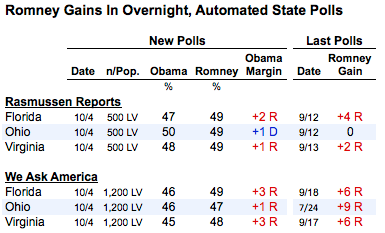 Five of the six one-night polls show single-digit shifts to Romney. The change on the Rasmussen surveys is relatively modest, averaging a roughly two-point gain for Romney on the margin. The We Ask America surveys show much bigger shifts. The more subtle changes are to be expected on the Rasmussen polls, since the pollster weights its samples to match party identification targets.

The new state polls have helped narrow the Obama-Romney margin on the HuffPost Pollster tracking model of the national popular vote. As of this writing, the HuffPost model, which is based on all available surveys both national and statewide, gives Obama a roughly three-point lead (48.3 to 45.2 percent), though it will continue to update as new polls become available.

Over the next week, new polls will be released using more rigorous methods, including national surveys that are usually more accurate than statewide surveys. The polls still to come will reach voters with more distance from their immediate reactions to Wednesday night's debate and will also begin to reflect any response to Friday's jobs report (showing the unemployment level declining to 7.8 percent).

The HuffPost tracking model has seen Obama's lead expand and contract briefly several times this year. It will take a few days to know with greater confidence whether the latest move will persist.