The headline would not surprise regular followers of the election; both aggregated polls and expectations created from polls have been telling that story. What is impressive is the trend and magnitude of the movement in last few weeks (i.e., since the end of the Republican National Convention). Below I have charted the likelihood of victory for Obama from my forecast that uses a combination of fundamental data, polling data, and prediction market data. 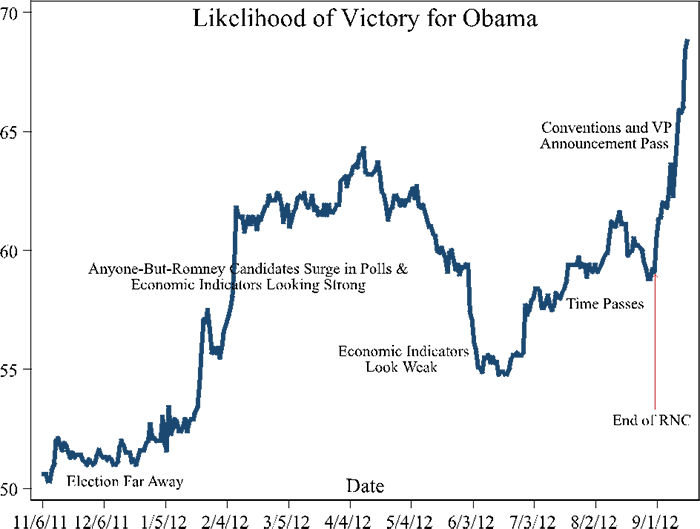 As an incumbent candidate with mediocre economic indicators, Obama's likelihood of victory hovered at just over 50 percent likelihood a year before the election. A full year before the election the uncertainty in the prediction rests in a year's worth of events: from the nomination of the Republican candidate, to economic indicators, to any of the multitude of unforeseen events that can occur in a year's time.

Obama's rise during the first few months of the 2012 occurred for two reasons: Romney's vulnerability and strong economic indicators. First, my model always had Romney as the most likely Republican nominee, but struggling to secure his party's nomination made him appear weak heading into the general election. Second, economic indicators were surging during this period, 275,000 jobs were created in January, inviting the possibility of a quick and decisive economic recovery.

The economic indicators took a turn for the worse in the spring and Obama's numbers collapsed along with them. Research that I conducted with Patrick Hummel makes three key observations about economic indicators and elections. First, it is trends not levels that are important; if economic levels were key, than Obama, or anyone who took over in January 2009 when we lost 818,000 jobs, would have no chance at reelection. Second, the impact of economic indicators crescendos around the second quarter of the election year; they continue to be meaningful after that, but there is a diminishing return to their impact. The storyline created by the first and second quarters was a tepid recovery and unless something shocking happens in the next few indicators, that story is hard to shake. Third, state-by-state indicators are of paramount relative to national numbers; thus, it is very relevant that key states such as Ohio and Virginia are doing much better than the national average.

As the summer turned towards Labor Day, Obama gained ground every day that Romney did not. Time is kind to incumbents and leading candidates. For example, Romney continues to struggle with historically low favorability and every day that he does not turn that around is one less day for him to make it happen.

The conventions and the nomination of a vice-presidential candidate are a key opportunity for the trailing candidate to shake up the race. The Republicans did not exceed expectations and the Democrats did not fall below expectations. That juxtaposition alone is sufficient for the Democratic nominee to trend upward and gain in likelihood of victory.

The remaining uncertainty in my prediction is not what will happen if the election were held today, but in what will happen over the next few weeks that could impact the election. The burden is now completely on Romney and/or Ryan to move the needle in their four debates, or orchestrate some other major event. If nothing major happens, than Obama will be reelected.