Candidate Barack Obama caused a stir when he singled out Ronald Reagan in 2008 as a transformational president who "changed the trajectory of America" in ways that neither Richard Nixon nor Bill Clinton managed. Of course, Obama was not embracing conservative policies, but he was marveling at Reagan's impact. It is Obama, though, that now stands as the most consequential second-term president since the Second World War.

Of course, Ronald Reagan's watch saw the demise of the Soviet Union. But his influence on that historic event was shared. Reagan's declarations of "evil empire" were memorable rhetorical flourishes, but as a driver of change they took a backseat to the Soviet empire's internal decay, economic collapse and corruption. The U.S. defense buildup may have contributed to pushing the Soviets over the edge, but it started under Jimmy Carter.

Obama's policies and actions since his second inauguration have reshaped or initiated new developments of enormous consequence for the U.S. domestic and foreign policy. America now has a climate change policy for the first time. In a sharp departure, the Obama administration launched a broad crackdown on the drivers of global warming by issuing new regulations to cut the emission of methane by the gas and oil industry and carbon dioxide. The international agreement in Paris is not legally binding, but it creates global expectations that will target global scrutiny on countries that fail to comply. Much remains uncertain, but these and other changes in policy are meshing with new expectations among businesses and consumers that are likely to persist and evolve.

Obama's policies and actions since his second inauguration have reshaped or initiated new developments of enormous consequence for the U.S. domestic and foreign policy.

Venomous relations with Iran and Cuba existed for decades until Obama intervened. Cuba had been a regional irritation that remained trapped in the time warp of the Cold War. The president's normalizing of relations swept that away. New U.S.-Cuba relations are gaining broad acceptance and will affect U.S. relations in the Caribbean and Latin America for years to come.

The treaty with Iran will remain contentious and uncertain for some time. The deal may lead to a more aggressive and threatening Iran as showcased by its expanding ballistic missile program. Yet Iran has also taken steps to abide by the treaty, including its shipment to Russia of nearly all of its stockpile of low-enriched uranium. The implementation of the treaty later this year, which appears more likely, may gradually coax Iran back into the circle of nations and lead to significant changes in U.S. diplomacy and national security in the Middle East and more broadly. Obama drew the enmity of labor for winning fast-track trade authority on the Trans-Pacific Partnership, but he may use it this year to help reestablish the U.S. as a dominant power in the Pacific at a time of growing Chinese sway.

The Bee Gees hit song, "Stayin' Alive," comes to mind on health reform. The Affordable Care Act was passed during the first term, but the heavy lifting of implementation came in the second term as the administration was stalked by congressional votes to repeal it and yet another Supreme Court case aimed at gutting it.

The launch of this mammoth new program experienced the hiccups that all our major new social policies have -- from Social Security to Medicare. But the impact is now without dispute -- for those guided by independent data. Over 16 million and counting have gained coverage from the new insurance exchanges and the expansion of Medicaid for lower income Americans. The insurance exchanges remain controversial, but the firestorm is directed at one component of health reform that directly affects about 5 percent of Americans who are neither seniors nor covered through employers. 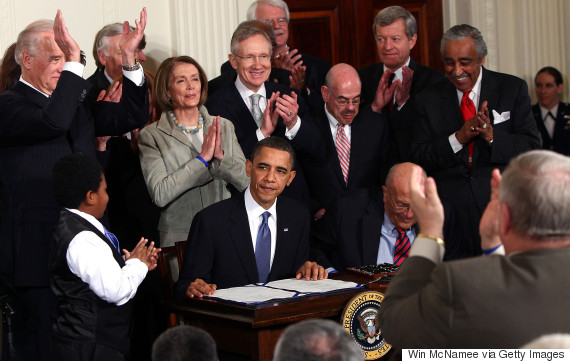 Here is what is rarely acknowledged and speaks volumes about Obama's impact: we now accept the sea change in the lives of most Americans that the Affordable Care Act swept in. No one serious challenges the Affordable Care Act's guarantee of insurance coverage for all without the threat of preexisting conditions, the new coverage for the prescription drug benefits for seniors and much more. One of the most liberal components of health reform -- the expansion of Medicaid -- has now been passed by 30 states and growing, including a growing number controlled by Republicans. The most progressive tax reforms of the Obama presidency is buried in the Affordable Care Act -- Medicare taxes for high-income earners rose and, in a significant departure for social insurance, a new tax on the capital gains of the affluent was introduced.

No social policy has impacted more people in the modern era. A program to extend health insurance to children passed during Clinton's second term but was targeted on a narrow slice of the uninsured after his comprehensive reform collapsed.

Obama's health reform after 2012 compares favorably with the granddads of social policy. The Social Security legislation that FDR passed excluded over half of all working women and about two-thirds of African American workers and was dogged by serious problems and repealers for nearly four decades after its passage in 1935. Lyndon B. Johnson's Medicare largely focused on one age group -- seniors -- and on one medical cost -- hospital care.

How did Obama pull off so much facing vociferous congressional opposition? Nifty trick -- he capitalized on the executive authority and resources crafted by Nixon and Reagan. Faced with Democratic congressional obstruction, the two Republicans circumvented Congress by routinely deploying executive orders to direct policy, relying on executive agreements to strike international accords and constructing the White House's administrative capacity to act independently. Yes, the irony of Republicans equipping Obama is striking -- as it will be when a conservative president capitalizes on Obama's precedents.

Obama's impact stands out partly because of the competition among presidents who were elected to two terms since FDR. Four of the 5 suffered crises that forced them from office (Nixon), scandals that drained their political standing and distracted their administrations (Reagan and Clinton), or policy debacles that cratered their approval rating and political standing (Bush's war in Iraq and the financial crisis). Eisenhower's imprint was dulled by his modest ambitions.

Obama has been the target of partisan congressional "investigations" and the conservative press, but genuine scandals over sex, money and outright law-breaking have not touched him. This has left his energy and aspirations comparatively free to focus on changing policy.

Obama's health reform after 2012 compares favorably with the granddads of social policy.

Tabulating Obama's impacts does not mean that he achieved all that he set out to accomplish. Far from it. He failed to "contain" the self-proclaimed Islamic State, close Guantanamo and coax a peace agreement between Palestinians and Israelis. He made starts on immigration and helping America transition toward its future as a multi-racial country, but the results are uneven.

Even where Obama's impact is clear, debates will rage for years on the merits -- whether his second term advanced or set back America. The verdict is likely to offer a mix and change with time.

What is clear already is that Obama has transformed the policy landscape.Pre-order "Fed Power: How Finance Wins" co-written with Desmond King