HAVANA (Reuters) - President Barack Obama arrived to small but cheering crowds on Sunday at the start of a historic visit to Cuba that opened a new chapter in U.S. engagement with the island's Communist government after decades of hostility between the former Cold War foes.

The three-day trip, the first by a U.S. president to Cuba in 88 years, is the culmination of a diplomatic opening announced by Obama and Cuban President Raul Castro in December 2014, ending an estrangement that began when the Cuban revolution ousted a pro-American government in 1959.

"It's a historic opportunity to engage directly with the Cuban people," Obama told staff at the newly reopened U.S. Embassy who were gathered at a hotel, his first stop after arriving in the afternoon.

Groups of Cubans watched the motorcade from balconies and backyards as Obama was driven downtown, where a small crowd of Cubans braved a tropical downpour and tight security. They chanted: "Viva Obama, Viva Fidel," as the president and his family left after eating dinner in a rundown neighborhood.

Obama, who abandoned a longtime U.S. policy of trying to isolate Cuba, wants to make his policy shift irreversible even if a Republican wins the White House in the Nov. 8 election.

But major obstacles remain to full normalization of ties, and the Democratic president's critics say the visit is premature. U.S. officials concede the trip may not yield immediate concessions from Cuba on rights and economic freedom.

On Sunday, one bystander shouted: "Down with the blockade," in reference to the U.S. embargo in place for 54 years that remains the top irritant for Cubans. Obama, who responded to the shout by raising his right hand, has asked Congress to rescind the embargo but has been blocked by the Republican leadership.

Underscoring the ideological divide that persists between Washington and Havana, Cuban police, backed by hundreds of pro-government demonstrators, broke up the regular march of a leading dissident group, the Ladies in White, detaining about 50 people just hours before Obama arrived.

AIR FORCE ONE IN CUBA

Obama arrived at Havana's Jose Marti International Airport in Air Force One, the presidential jet with "United States of America" emblazoned across its fuselage, a sight almost unimaginable not long ago on the island, just 90 miles (145 km) off the coast of Florida.

He was met by Cuban Foreign Minister Bruno Rodriguez, the top Cuban official present. The formal welcoming ceremony will be on Monday when Obama meets the Cuban president at the presidential palace.

U.S. officials appeared unfazed by Castro’s absence from the airport welcome, even though he personally met and greeted Pope Francis in September. Republican presidential front-runner Donald Trump tweeted that Obama’s visit was a “big deal” but that he got “no respect.”

Obama will hold talks with Castro – but not his brother Fidel, the revolutionary leader - and speak to entrepreneurs on Monday. He meets privately with dissidents, addresses Cubans live on state-run media and attends an exhibition baseball game on Tuesday.

The trip carries both symbolism and substance after decades of hostility between Washington and Havana.

Traveling with first lady Michelle Obama, her mother and their daughters, Sasha and Malia, Obama took in the sights of the colonial-era neighborhood and was given a tour of Havana's 18th century cathedral by Cardinal Jaime Ortega, who played a role in secret talks that led to the rapprochement 15 months ago.

The Obamas dined at the San Cristobal restaurant, run by an Afro-Cuban as part of a cautious opening to private enterprise since Fidel Castro handed power to his brother in 2008.

The trip makes Obama the first sitting American president to visit Cuba since Calvin Coolidge arrived on a battleship in 1928 and may help chip away at barriers to U.S.-Cuba trade and travel.

Since rapprochement, the two sides have restored diplomatic ties and signed commercial deals on telecommunications and scheduled airline service.

Obama has used executive authority to loosen trade and travel restrictions to advance his outreach to Cuba, one of his top foreign policy priorities along with the Iran nuclear deal.

Cuba still complains about U.S. control of the naval base at Guantanamo Bay under a 1934 lease agreement that Havana says is no longer valid and that Obama has said is not up for discussion. Havana is unhappy with U.S. support for dissidents and anti-communist radio and TV programs beamed into Cuba.

Speaking to reporters, Foreign Trade and Foreign Investment minister Rodrigo Malmierca Díaz said before the U.S. president's arrival that Obama's regulatory moves "go in the right direction." But he added: "We can’t reach a normalization of relations with the blockade still in effect."

The Americans in turn criticize one-party rule and repression of political opponents, an issue that aides said Obama would address publicly and privately.

Obama's critics at home accuse him of making too many concessions for too little in return from the Cuban government and of using his trip to take an unearned "victory lap."

Obama’s first words to the Cuban people came in a message on Twitter, a social media service that few Cubans can use regularly because of government restrictions on Internet access.

“Just touched down here, looking forward to meeting and hearing directly from the Cuban people.”

Little progress on the main issues is expected when Obama and Castro meet on Monday or at a state dinner that evening.

Instead, the highlights are likely to be Obama's speech on live Cuban television on Tuesday, when he will also meet dissidents and attend an exhibition baseball game between Major League Baseball's Tampa Bay Rays and Cuba's national team. 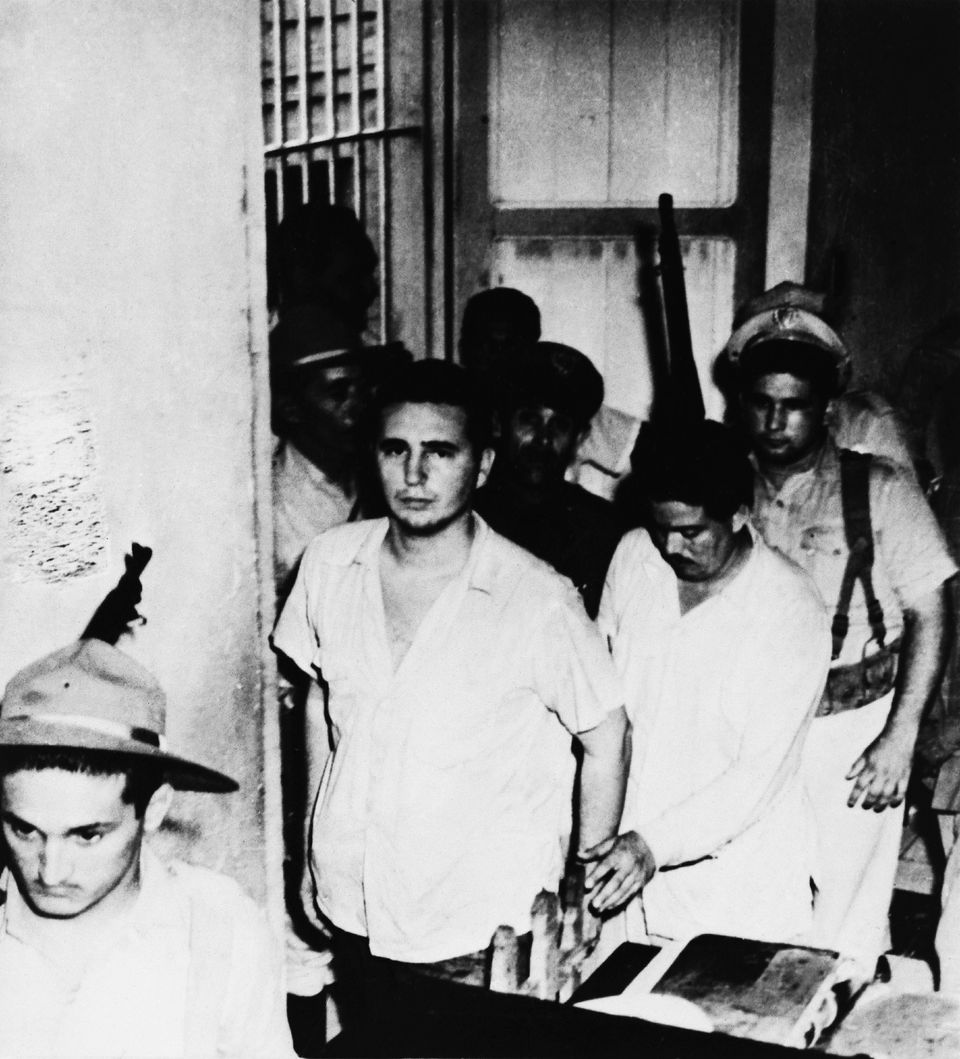 1 / 7
Fidel Castro is captured as he heads for trial following the <a href="http://www.pbs.org/wgbh/amex/castro/peopleevents/e_moncada.html" target="_blank">failed attack on the Moncada military barracks</a>&nbsp;on July 26, 1953. Despite its failure, many saw the attack as an important moment in the Cuban revolution against the rule of incumbent president Fulgencio Batista.
Keystone-France/Gamma-Keystone via Getty Images