BEIRUT -- For the second time within a week, a major policy speech by a top Obama administration figure passed without mention of what was once a leading American foreign policy priority: the tumultuous political transition in Egypt.

In the short section of Tuesday night's State of the Union address that touched on foreign policy, President Barack Obama noted that the U.S. was "supporting those who are willing to do the hard work of building democracy," but did not include Egypt in his list of such nations.

Last Friday, Secretary of State John Kerry also skipped over Egypt in a speech delivered at the World Economic Forum in Davos, Switzerland, in what one New York Times columnist described as "a glaring omission."

Both omissions were in part a reflection of how far Egypt has plummeted as a U.S. concern, said Michael Wahid Hanna, an Egypt expert at the Century Foundation in New York. "Egypt has dropped significantly on an American list of priorities in the region," Hanna said. "It just doesn't rate."

But, Hanna added, the lack of mention also reflected an emerging reality on the ground in Egypt: that American pressure appears to matter far less than it has before.

"The U.S. has essentially thrown its hands up in frustration," he said. "It doesn't have particularly good options for how to formulate this policy and probably thinks the prospects for the current transition are not particularly good."

Indeed, in the three years since a popular protest movement led to the downfall of Egypt's aging dictator Hosni Mubarak, the country's ongoing political turmoil has proven stubbornly impervious to American influence. Last summer, for instance, as a disgruntled military leadership seemed poised to mount a coup against the democratically elected government of Mohammed Morsi, a Muslim Brotherhood politician, the U.S. aggressively worked all sides of the government in an attempt to prevent a takeover -- to no avail.

Later, the U.S. led a substantial lobbying campaign together with European diplomats to stop the military from violently clearing a Muslim Brotherhood protest encampment in Cairo. That effort, too, failed to prevent significant bloodshed and a subsequent crackdown on the entire Brotherhood movement.

"The president has publicly affirmed his support for a democratic transition in Egypt, but everything that has happened over the last three years underscores how marginal Washington is in the trajectory of Egyptian politics," said Steven Cook, a senior fellow at the Council on Foreign Relations. "My sense is that the White House understands this reality."

Still, that hasn't prevented the omissions from being portrayed as a snub -- and an indication of a broader foreign policy malaise over Egypt -- by critics of the president's policies.

"This Egyptian debacle is a significant strategic failure for the United States," wrote the New York Times columnist, Roger Cohen, earlier this week. "And of course, like red lines that proved not to be so red in Syria, it has sent a message of American retreat."

There are more benign explanations for Egypt's omission from the State of the Union address. Tommy Vietor, a former foreign policy aide to Obama, cautioned against reading too much into it, given that foreign policy was a minor portion of the speech over all.

"I think [there's] nothing to see here," Vietor said by email. "You have a small foreign policy section to begin with so things are going to get left out or get less attention."

Whatever the ultimate role of the U.S. in Egypt's transition, with the ongoing deterioration of the political atmosphere there, it's little shock to observers that the country did not earn a mention in a prime-time presidential address.

"It's not surprising that it's not going to be highlighted," Hanna said. "It's simply not a good story to tell."

Obama State Of The Union Omits Egypt, The Country's Second Snub In Past Week
State of the Union 2014 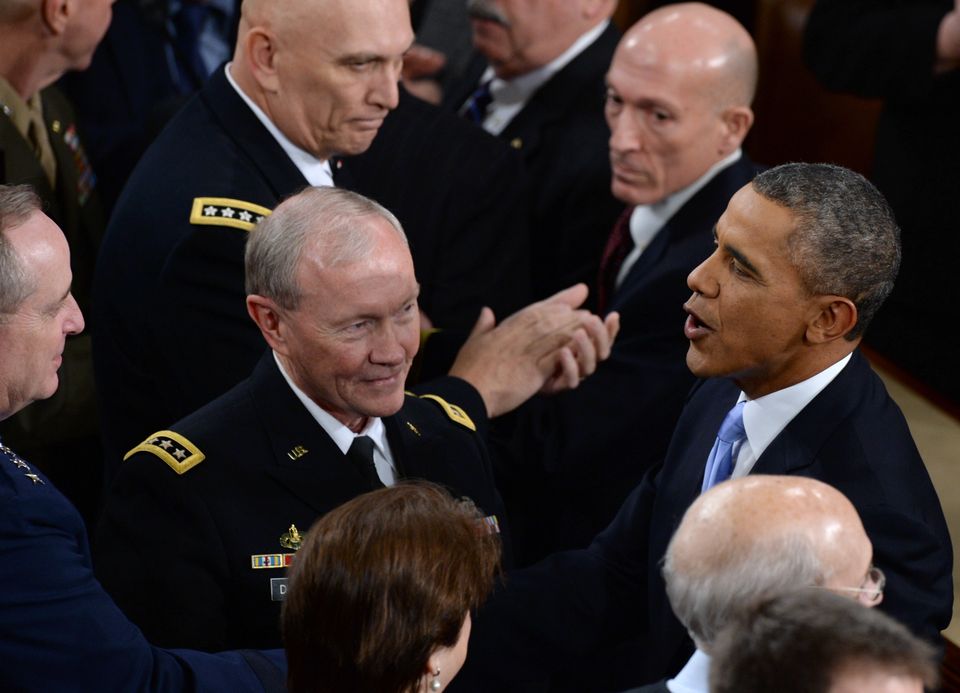