President Barack Obama made a surprise visit to Afghanistan on Tuesday night to sign an agreement with President Hamid Karzai outlining the United States' military presence in Afghanistan after 2014.

In a live address, President Obama spoke from Bagram Air Base north of Kabul early Wednesday morning, emphasizing that America must finish the job it started while Afghanistan stabilizes.

"My fellow Americans, we have traveled through more than a decade under the dark cloud of war. Yet here, in the pre-dawn darkness of Afghanistan, we can see the light of a new day on the horizon. The Iraq War is over. The number of our troops in harm’s way has been cut in half, and more will be coming home soon. We have a clear path to fulfill our mission in Afghanistan, while delivering justice to al Qaeda," he said.

President Obama also underlined points of the agreement, including that the U.S. will not build military bases in Afghanistan.

"We will shift into a support role as Afghans step forward," President Obama said.

Below, see photos of Obama's trip to Afghanistan. Captions courtesy of the Associated Press.

HIGHLIGHTS OF THE AGREEMENT:

THE PRESIDENT: Good evening from Bagram Air Base. This outpost is more than 7,000 miles from home, but for over a decade it's been close to our hearts. Because here, in Afghanistan, more than half a million of our sons and daughters have sacrificed to protect our country.

Today, I signed a historic agreement between the United States and Afghanistan that defines a new kind of relationship between our countries -- a future in which Afghans are responsible for the security of their nation, and we build an equal partnership between two sovereign states; a future in which war ends, and a new chapter begins.

And so, 10 years ago, the United States and our allies went to war to make sure that al Qaeda could never again use this country to launch attacks against us. Despite initial success, for a number of reasons, this war has taken longer than most anticipated. In 2002, bin Laden and his lieutenants escaped across the border and established safe haven in Pakistan. America spent nearly eight years fighting a different war in Iraq. And al Qaeda’s extremist allies within the Taliban have waged a brutal insurgency.

But over the last three years, the tide has turned. We broke the Taliban’s momentum. We’ve built strong Afghan security forces. We devastated al Qaeda’s leadership, taking out over 20 of their top 30 leaders. And one year ago, from a base here in Afghanistan, our troops launched the operation that killed Osama bin Laden. The goal that I set -- to defeat al Qaeda and deny it a chance to rebuild -- is now within our reach.

Still, there will be difficult days ahead. The enormous sacrifices of our men and women are not over. But tonight, I’d like to tell you how we will complete our mission and end the war in Afghanistan.

First, we've begun a transition to Afghan responsibility for security. Already, nearly half of the Afghan people live in places where Afghan security forces are moving into the lead. This month, at a NATO Summit in Chicago, our coalition will set a goal for Afghan forces to be in the lead for combat operations across the country next year. International troops will continue to train, advise and assist the Afghans, and fight alongside them when needed. But we will shift into a support role as Afghans step forward.

As we do, our troops will be coming home. Last year, we removed 10,000 U.S. troops from Afghanistan. Another 23,000 will leave by the end of the summer. After that, reductions will continue at a steady pace, with more and more of our troops coming home. And as our coalition agreed, by the end of 2014 the Afghans will be fully responsible for the security of their country.

Second, we are training Afghan security forces to get the job done. Those forces have surged, and will peak at 352,000 this year. The Afghans will sustain that level for three years, and then reduce the size of their military. And in Chicago, we will endorse a proposal to support a strong and sustainable long-term Afghan force.

Third, we’re building an enduring partnership. The agreement we signed today sends a clear message to the Afghan people: As you stand up, you will not stand alone. It establishes the basis for our cooperation over the next decade, including shared commitments to combat terrorism and strengthen democratic institutions. It supports Afghan efforts to advance development and dignity for their people. And it includes Afghan commitments to transparency and accountability, and to protect the human rights of all Afghans -- men and women, boys and girls.

Within this framework, we’ll work with the Afghans to determine what support they need to accomplish two narrow security missions beyond 2014 -- counter-terrorism and continued training. But we will not build permanent bases in this country, nor will we be patrolling its cities and mountains. That will be the job of the Afghan people.

Fourth, we’re pursuing a negotiated peace. In coordination with the Afghan government, my administration has been in direct discussions with the Taliban. We’ve made it clear that they can be a part of this future if they break with al Qaeda, renounce violence and abide by Afghan laws. Many members of the Taliban -- from foot soldiers to leaders -- have indicated an interest in reconciliation. The path to peace is now set before them. Those who refuse to walk it will face strong Afghan security forces, backed by the United States and our allies.

Fifth, we are building a global consensus to support peace and stability in South Asia. In Chicago, the international community will express support for this plan and for Afghanistan’s future. And I have made it clear to its neighbor -- Pakistan -- that it can and should be an equal partner in this process in a way that respects Pakistan’s sovereignty, interests and democratic institutions. In pursuit of a durable peace, America has no designs beyond an end to al Qaeda safe havens and respect for Afghan sovereignty.

As we move forward, some people will ask why we need a firm timeline. The answer is clear: Our goal is not to build a country in America’s image, or to eradicate every vestige of the Taliban. These objectives would require many more years, many more dollars, and most importantly, many more American lives. Our goal is to destroy al Qaeda, and we are on a path to do exactly that. Afghans want to assert their sovereignty and build a lasting peace. That requires a clear timeline to wind down the war.

Others will ask, why don’t we leave immediately? That answer is also clear: We must give Afghanistan the opportunity to stabilize. Otherwise, our gains could be lost and al Qaeda could establish itself once more. And as Commander-in-Chief, I refuse to let that happen.

I recognize that many Americans are tired of war. As President, nothing is more wrenching than signing a letter to a family of the fallen, or looking into the eyes of a child who will grow up without a mother or father. I will not keep Americans in harm’s way a single day longer than is absolutely required for our national security. But we must finish the job we started in Afghanistan and end this war responsibly.

My fellow Americans, we’ve travelled through more than a decade under the dark cloud of war. Yet here, in the pre-dawn darkness of Afghanistan, we can see the light of a new day on the horizon. The Iraq war is over. The number of our troops in harm’s way has been cut in half, and more will soon be coming home. We have a clear path to fulfill our mission in Afghanistan, while delivering justice to al Qaeda.

This future is only within reach because of our men and women in uniform. Time and again, they have answered the call to serve in distant and dangerous places. In an age when so many institutions have come up short, these Americans stood tall. They met their responsibilities to one another, and to the flag they serve under. I just met with some of them and told them that as Commander-in-Chief, I could not be prouder. And in their faces, we see what is best in ourselves and our country.

Our soldiers, our sailors, our airmen, Marines, Coast Guardsmen and civilians in Afghanistan have done their duty. Now we must summon that same sense of common purpose. We must give our veterans and military families the support they deserve, and the opportunities they have earned. And we must redouble our efforts to build a nation worthy of their sacrifice.

As we emerge from a decade of conflict abroad and economic crisis at home, it’s time to renew America -- an America where our children live free from fear and have the skills to claim their dreams. A united America of grit and resilience, where sunlight glistens off soaring new towers in downtown Manhattan, and we build our future as one people, as one nation.

Here in Afghanistan, Americans answered the call to defend their fellow citizens and uphold human dignity. Today, we recall the fallen and those who suffered wounds, both seen and unseen. But through dark days, we have drawn strength from their example and the ideals that have guided our nation and led the world -- a belief that all people are treated equal and deserve the freedom to determine their destiny. That is the light that guides us still.

This time of war began in Afghanistan and this is where it will end. With faith in each other and our eyes fixed on the future, let us finish the work at hand and forge a just and lasting peace. 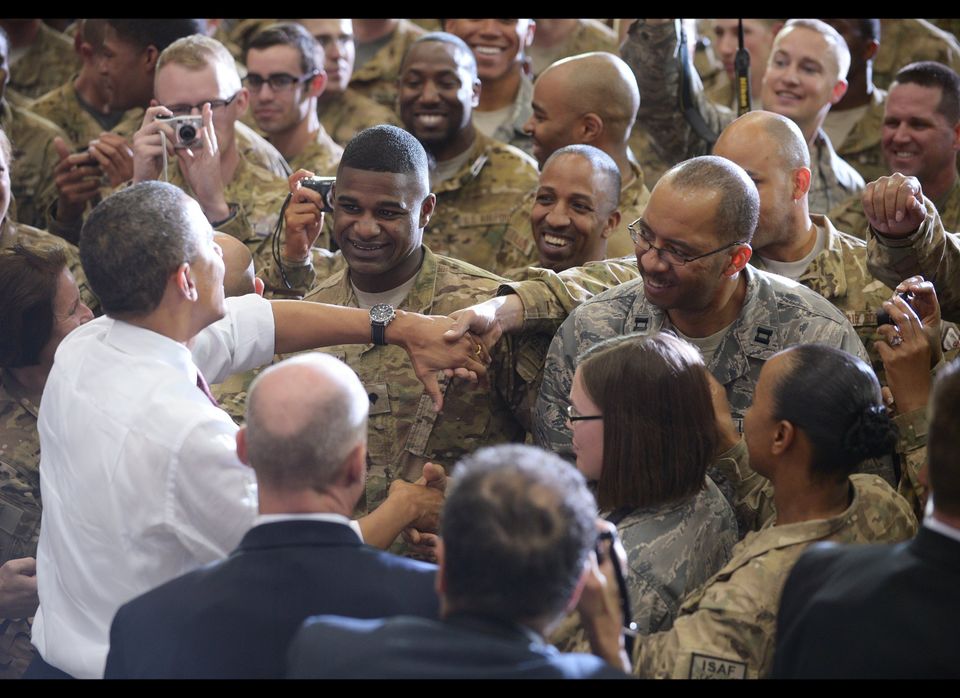