President Obama joined the ranks of tipsy revelers across the nation by ringing in St. Patrick's Day with a pint of Guinness.

Obama stopped by The Dubliner in Washington, D.C. on Saturday afternoon wearing a green jacket, the AP reported. According to pool reports, he was welcomed with chants of "USA! USA! USA!" and "Four more years!".

While greeting patrons outside of the bar, one woman asked if the president would sign her face. He did not.

Bloomberg's Sabrina Siddiqui reported that the bar's owner told her that Obama finished his beer.

Obama's celebrations will continue this week. On Tuesday, he and Vice President Biden will meet with Irish Prime Minister Enda Kenny and attend a St. Patrick's Day lunch. The Obama 2012 campaign even debuted a special set of apparel just for the occasion.

Do you have photos or video of the president celebrating St. Patrick's day at The Dubliner? Send them to offthebus@huffingtonpost.com and we'll post them on our site!

"So an incumbent president facing a tough reelection fight walks into a bar..."

President Obama made a brief St Patrick's Day pilgrimage to a Washington DC Irish bar, The Dubliner, on Saturday, where he quaffed a pint of Guinness and enjoyed cheers from a rowdy crowd of green-clad partiers, some of whom had staked out their spots as early as 10 am. He was accompanied by Henry Healy, described by a White House staffer as the president's ancestral cousin from Moneygall, Ireland, as well as Ollie Hayes, the owner of the Publican bar that the president went to on Moneygall.

The president, thwarting any would-be pinchers with a pale moss-green jacket that read "National Parks, America's Best Idea," left the White House grounds at 12:46 pm, his motorcade snaking past well-wishers down to the Dubliner and arriving there at 12:59. A great cheer went up from patrons under a tent on the Dubliner's sidewalk terrace. Another cheer went up from the drinkers one door down at the Irish Times. At both spots, revelers adjusted their green schwag (your pooler was especially fond of the Leprecaun-style hats, though the green wigs and beads were nifty as well, while the shamrock face stickers looked like they would be regretted come Sunday morning) and fumbled with their smart phones to snap a photo. One woman loudly urged the president to "sign my face." He declined, but spent a few minutes shaking hands outside before walking into the Dubliner, past a sign that read:

"He who drinks and knows his pace is always welcome in this place. But he who drinks more than his share is never welcome anywhere."

The president got more raucous cheers as he walked in (if he paid the $10 cover, it was out of your pooler's field of vision). At the bar in the Dubliner's front room, the president enjoyed a Guinness, taking a couple of respectable sips with what your pooler read as an expression of contentedness. The resulting Guinness mustache was, pooler and others agreed, "much more 'David Niven,' and much less (AP White House ace) Jim Kuhnhenn." On two occasions, the hundreds of partiers sent up cries of "Four more years!" and there was a raucous "U.S.A! U.S.A.!" call at one point.

The president posed for a few pictures, including one with Danny Cooper Coleman, age 21 months. [Dubliner owner Danny Coleman later informed the pool that little Danny is his grandson, and that his photo adorned the "VIP Guest" badge that the president wore. Asked how the president fared with his Guinness, the elder Coleman told your pooler: "He finished it!" He said that the bartender who pulled the president's pint is named Brian Keane. He also disclosed that he had received a scant 5 minutes warning that the president was coming. The bar's website is here: http://www.dublinerdc.com/ ]

The pool was ushered out into the sidewalk space while the president continued to sip his beer, grin, shake hands, and chat with bar patrons under a TV that was showing basketball highlights. White House trip director Marvin Nicholson came out briefly to chat with the pool. Marvin was rocking a bright green fleece. Your pooler chatted with Adam Joseph, a self-described Chicago native now living in DC, who described his brief exchange with the president. "I told him 'Mister President, it's my birthday!' And he said 'Happy birthday.'" Joseph, who said he was now 29, smiled when your pooler asked whether he had cadged a photo with the president. "Kinda. Well, I got a picture *of* him."

At about 1:14, still photographers were allowed inside. At 1:30, the president emerged from The Dubliner, shook a few more hands, gave a thumbs up to one man who shouted "Go Bulls!" and told Joseph "you're getting old." The president smiled and waved to the patrons in the packed Irish Times sidewalk area, then to another hundred or so gawkers on the sidewalk at North Capitol and F Street, boarded his ride, and by 1:45 we were back at the White House.

We have a travel photo lid. Your pooler hopes you will notice that not once did he mention "Erin Go Bragh."

Check out the president's St. Paddy's Day festivities below: 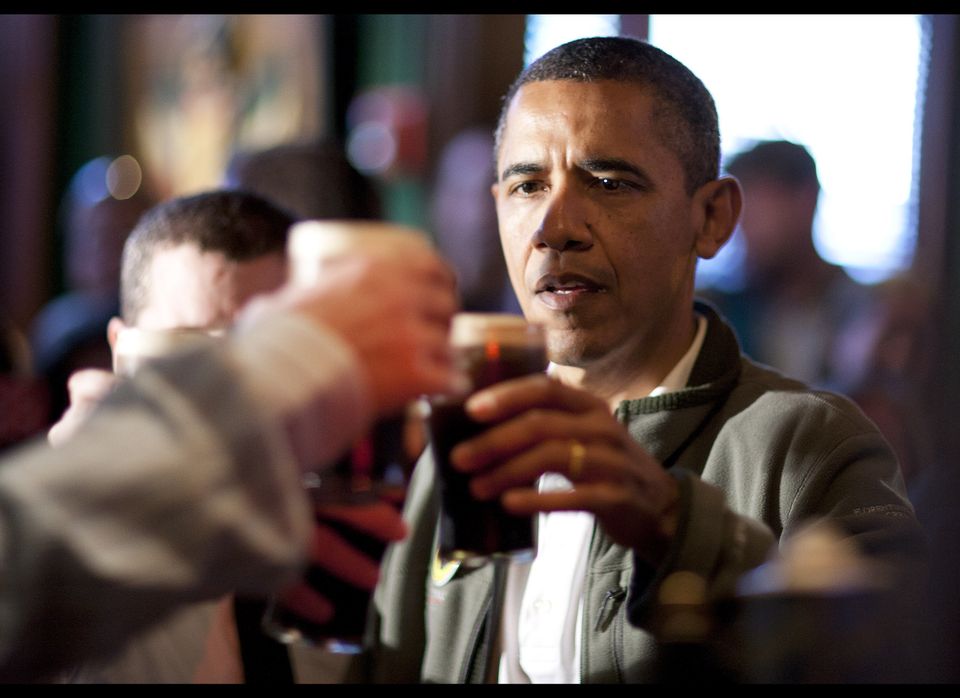 1 / 8
WASHINGTON, DC - MARCH 17: (AFP OUT) U.S. President Barack Obama toasts with Guinness beer as he visits a bar in celebration of St. Patrick's day at the Dubliner Restaurant and Pub on March 17, 2012 in Washington, DC. Next week, Obama and Vice President Biden will meet the Irish Prime Minister Enda Kenny and attend a St. Patrick's Day lunch at the Capitol. (Photo by Joshua Roberts/Getty Images)
Getty