Publicity for an event sponsored by the Koch brothers-backed Americans for Prosperity served up a blunt Obama-is-a-communist message over the weekend, as Talking Points Memo reports.

Americans for Prosperity is sponsoring a State of the Union watch party at a Grand Rapids, Mich., steakhouse. A Facebook ad for the event portrayed President Barack Obama as Joseph Stalin with smiling Soviet children bringing him flowers and the Moscow Kremlin in the background. The text read, "Thank You, Comrade Obama, For Saving the Children From the Menace of Guns, Family, Liberty, Work, and Other Outdated Values."

The ad was posted on Saturday and has since been removed. It appeared to mimic an old communist propaganda poster of Stalin. In the bottom right corner were the words "ThePeoplesCube.com," a satirical conservative website founded by Oleg Atbashian, a Ukrainian immigrant and former Soviet propaganda artist. 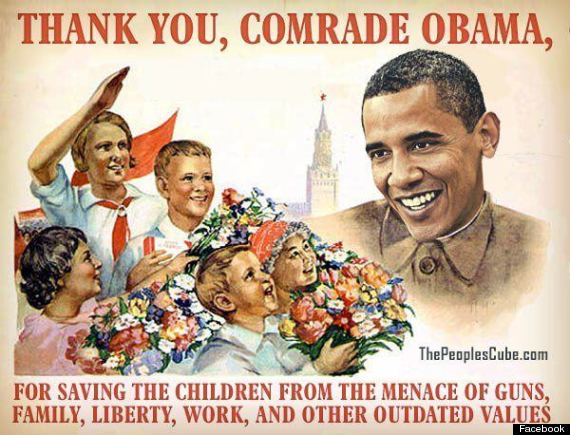 CORRECTION: An earlier version of this story incorrectly credited Americans for Prosperity with the Obama-Stalin comparison. A group spokesman says it did not, in fact, produce or endorse the Facebook ad.

1 / 8
Abortion Ban With No Rape Exception
<strong>What the 2012 Republican platform draft says:</strong> Republicans <a href="http://www.tampabay.com/blogs/the-buzz-florida-politics/content/gop-platform-spoiler-alert-no-exception-rape-incest-abortion-plank" target="_hplink">oppose</a> abortion in all cases with no exceptions for rape or incest. <strong>Romney's position:</strong> Romney <a href="https://www.huffpost.com/huff-wires/20120821/us-gop-convention-platform/" target="_hplink">opposes</a> abortion but supports exceptions for rape and incest. <strong>Obama's position:</strong> Obama <a href="http://www.vote-smart.org/npat.php?old=true&can_id=BS030017&npatform_id=69#0" target="_hplink">supports</a> the Democratic Party platform, which states that abortions should be legally available in accordance with Roe v. Wade.
AP