President Obama reaffirmed his commitment to tackling climate change in his State of the Union Address. As the president laid out his plans to revitalize the economy, strengthen security, and expand opportunity, he made it clear that the path to a brighter tomorrow leads straight through climate action.

"No challenge - no challenge - poses a greater threat to future generations than climate change," the president said.

The president underscored the overarching scale of the climate crisis. It's the sweeping hazard that imperils everything from our health with dirty air to our economy with costly damages.

No one wants their children and grandchildren to inherit these dangers.

And that's why President Obama vowed to redouble his administration's Climate Action Plan. And that's why he promised to preserve this plan from attack. "I will not let this Congress endanger the health of our children by turning back the clock on our efforts," he said.

This is a full-throated promise to veto congressional attempts to block the president's Clean Power Plan--a plan to curb carbon pollution from power plants and expand clean energy.

The contrast couldn't be clearer.

The president is working to clean up the air and stabilize the climate. The GOP, meanwhile, hasn't offered a single solution to address the threat of climate change. Instead, Republican lawmakers are trying to make life easier for polluters by gutting public health safeguards and fast-tracking the Keystone XL pipeline for tar sands oil--the dirtiest fuel on the planet.

The GOP approach will take our country backward. President Obama is moving our nation into the future. 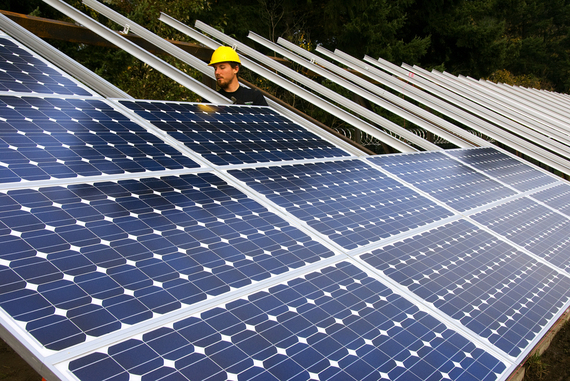 The clean energy economy is thriving. Nearly a quarter of a million clean energy and clean transportation jobs have been announced over the past three years, generating opportunities in every state in the country. The solar industry created jobs at a rate almost 20 times faster than the rest of the economy last year, and in just three months alone, the clean energy sector created nine times more jobs than the 35 permanent and 1,950 construction jobs the Keystone XL pipeline would generate.

Clean energy growth will continue to expand, thanks to the Environmental Protection Agency's proposed limits on carbon pollution from power plants--the nation's largest source of climate change pollution. These carbon limits have the potential to unleash up to $120 billion in clean energy investment and save the average household about $100 a year on electricity bills by 2020.

Those carbon limits have already helped inspire historic joint commitments between China and the United States. As the president said on Tuesday night, "Because the world's two largest economies came together, other nations are now stepping up, and offering hope that, this year, the world will finally reach an agreement to protect the one planet we've got."

Clean air, good paying jobs, and the promise of a brighter future. That is what most Americans want. They aren't asking Congress to make the air dirtier or to ignore the spike in extreme weather. A new poll by Hart Research Associates found that 72 percent of Americans strongly support stricter limits on pollution and 82 percent support reducing carbon emissions from power plants.

Last night, President Obama renewed his commitment to clean air and climate action. GOP leaders will continue to push their Big Polluter Agenda, but the president's plan for tackling climate change will strengthen our communities now and create the kind of world we want our children to inherit.