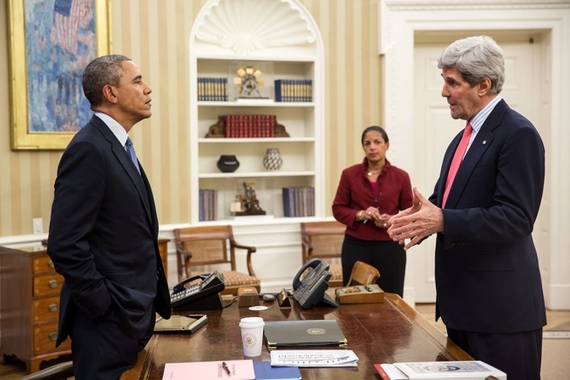 President Obama, Secretary of State John Kerry and National Security Adviser Susan Rice. Days after warning, "I've got a pen and ... a phone and if Congress won't do its job, I'll do mine," Obama met with his national security team to green-light a new climate change project. "Call me the Rainmaker," he told the group assembled, alluding to the plan's code name. (Official White House Photo by Pete Souza)

Reason for brutal winter in the United States finally explained.

It's not as if Obama didn't alert us. Remember his 2013 State of the Union address:

"If Congress won't act soon [on climate change] to protect future generations, I will. I will direct my Cabinet to come up with executive actions we can take, now and in the future, to reduce pollution, prepare our communities for the consequences of climate change, and speed the transition to more sustainable sources of energy."

I interpreted "executive actions" to mean promulgating regulations and rules, facilitating state- and community-level programs, and funneling more dollars to renewable energy R&D. It turns out Obama had a far more ambitious plan -- a high-tech geoengineering program that will almost certainly prove to be as controversial as it is (or was) secret.

Secret Report Lays Out the Plan

A heavily redacted copy of a classified report titled "America Cools Down on Climate" (ACDC) and obtained by TheGreenGrok outlines the audacious plan to use commercial air traffic to mitigate the growing impacts of climate change across the United States.

The plan falls under the category of what is known as geoengineering: the attempt by humans to slow, stop, or even reverse global warming by manipulating the environment instead of aiming to slow greenhouse gas emissions themselves.

Geoengineering examples include injecting particles into the stratosphere to reflect sunlight back into space and dumping iron into the ocean to enhance the uptake of atmospheric carbon dioxide by oceanic phytoplankton. The ACDC plan, code-named "Rainmaker," is considered by experts to be groundbreaking not only because it did not require the construction of a vast industrial infrastructure; it also helped keep flights on time.

Unknown Unknowns Not an Obstacle

While not a mainstream science solution to a global fix, many scientists find the idea of geoengineering intriguing. Its supporters have argued that its inclusion in a recent report by the Intergovernmental Panel on Climate Change gives it legitimacy. Other scientists, along with most policy makers and activists like Al Gore, believe the risks of something going wrong far outweigh any potential benefits.

For example, injecting iron into the ocean might enhance the growth of phytoplankton, which would "gobble up carbon dioxide through photosynthesis," but such "fertilization" would come at the expense of creatures that make their shells out of calcium carbonate, and could potentially slow photosynthesis -- the exact opposite of what the geoengineering scheme had intended to do.

Such propositions, to borrow a phrase from former Secretary of Defense Donald Rumsfeld, well-known for his green proclivities, swim in the arena of the "unknown unknowns -- the things we do not know we don't know." Like the precautionary principle, many in the environmental community have taken up the Rumsfeld credo shouting slogans like "Stop the unknown unknowns" at rallies and demonstrations.

Knowns or unknowns notwithstanding, Obama apparently chose to throw precaution to the wind, as it were, and go it alone on geoengineering. According to an insider who insisted on anonymity to avoid, as he put it, getting "Snowdenized," the president assembled the Joint Chiefs of Staff together in the War Room last March to set the geoengineering plan in motion.

According to the ACDC report, the country's extended drought spurred the president's action. The salient section reads:

"The prolonged and severe droughts in the country's agricultural heartlands are threatening our ability to feed our people and undermining our economy. We must take every step possible to provide greater amounts of fresh water to the Midwest and Southwest through manipulating large-scale circulation patterns such as the jet stream. Put simply, rainmaking or more specifically snowmaking is a must."

The report concludes that the most effective way to put the kibosh on U.S. drought is to increase wintertime snowpack, which would provide a key water source in the spring when crops emerge. The best way to do that: manipulate the jet stream to a more southern trajectory during wintertime to create a polar vortex that would spawn intense snowstorms. The report recognizes that this would mean harsh winter conditions for many parts of the country.

"Americans will suffer this winter," the report predicts, "but consumers will be thankful next year when the price of a Coke drops thanks to lowered high fructose corn syrup prices spurred by a bumper corn crop."

When Gen. Martin Dempsey, chairman of the Joint Chiefs of Staff, reportedly asked of the risks of a political backlash, President Obama responded, "Marty, if we can take down Osama on a wing and a prayer, manipulating the climate is child's play."

After the report was completed in August 2013, the administration began implementing the plan, a plan, I'll admit -- though I'm in no way a fan of geoengineering -- I'm in awe of because of its simultaneous simplicity and genius not to mention sheer chutzpah. (If nothing else, the program should silence all Obama's critics who yammer on about his purported indecisiveness.)

Key to the program were apparently specially designed flexible cords made out of nanofibers (basically high-tech bungee cords) and a personnel team from the Navy, Air Force, and U.S. Weather Service. Unwitting participants included: the airline industry and anyone who took a transcontinental flight this winter. NSA expert James Winkywinc explained that the program exemplified the spirit of military/civilian partnership even if the partnership was a secret to the public participants. Through a process that remains top secret, the Navy and Air Force tied one end of the bungee-like cords to commercial jets and the other to the jet stream and then used the jets' trajectory to pull that baby southward to form the polar vortex.

It may seem incredible, but it worked. Last winter the United States saw repeated intense polar vortex episodes (see also here) with one of the coldest winter in 20 years and snowfall breaking records in many areas of the Northeast and Midwest.

Among the major risks the president took with ACDC was geopolitical instability. The program was aimed at helping the Untied States deal with climate change without regard for the global community. Among the Joints Chiefs of Staff, there was concern that ACDC could set off a round of national geoengineering projects, triggering the world's first global war of geoengineering, known among military strategists as WW1-G.

But so far things on the international front seem to be going Obama's way. Several European countries, according to a source familiar with the program, upon learning of the U.S. plan cried foul. But their initial outrage was tempered by the results they saw in early December. Instead of a deep freeze, the warmer temperatures much of Europe saw was a pleasing turn after a summer battered by storms and flooding. The weather-related economic boon, seen in England's lower natural gas prices and Germany's increased construction, was also welcome. German Chancellor Angela Merkel was overheard saying, "Make no mistake, Obama overstepped again, but it turned out all right for us, so why complain?"

With the unqualified success of ACDC, there are rumors of a summertime geoengineering exercise: Phenological Revamping and other Natural Keys, or PRANK for short. We will be writing more about that one on April 1, 2015.