Obama made quite the bold sartorial choice on this late summer afternoon and donned a tan suit... 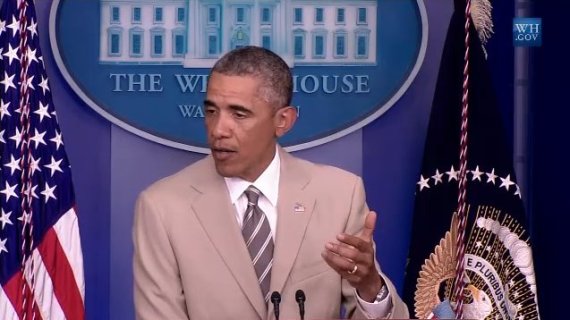 Perhaps it was the upcoming long weekend that inspired the president to choose a lighter, more breezy color? Or maybe it was his attempt to come across as just a regular gent, who likes to change up his suit colors every once in a while. Whichever the case, for a man who once told Vanity Fair that he wears "only gray or blue suits," the stark color change shocked the country...and by country, we mean Twitter. Instead of covering the content of what Obama was saying -- which again, was important -- many decided to become serious fashion critics for a hot second.

Obama vows to defeat whoever made him wear this suit. pic.twitter.com/zoqj7OVFRe

Who gave President Obama that old church suit from my dad's closet?

I'm sorry but you can't declare war in a suit like that.

President Obama is here to sell you tornado insurance pic.twitter.com/RYeWlKAm79

This suit is the boldest thing Obama's done in months.

The Audacity of Taupe pic.twitter.com/3EC7NN0By8

Message from senior White House official: 'He loves that suit.'

More than 4,000 tweets were posted about Obama's suit during that press conference pic.twitter.com/uyKoUrZlNy