WASHINGTON -- As the nation struggles with a stagnant economy, President Barack Obama has preached overhauling the U.S. tax code to spur economic growth. But as he gears up for what looks to be a tough reelection campaign, the president has surrounded himself with the current loophole-riddled system's prime offenders: corporate executives whose companies have profited off of those loopholes while reaping millions for themselves.

Institute for Policy Studies, a liberal think tank, named in a new report 25 major American corporations whose CEOs were paid more last year than their firm's total U.S. income tax bill. Of those business elites, 10 have substantive ties to Obama -- including some who have official economic policy advisory positions in his administration -- according to a HuffPost analysis of the report.

All told, these 10 CEOs with Obama connections brought in over $158 million for themselves last year. Their companies' federal tax bill, however, was a combined net benefit of $5.4 billion -- meaning the federal government actually owed these companies billions of dollars. Eight of the 10 firms not only did not pay taxes; they received large refunds. The 10 companies scored combined U.S. profits of $26.8 billion.

HuffPost's calculations are based on data compiled in the report by the IPS. The IPS figures, in turn, are drawn from documents the companies filed with the Securities and Exchange Commission.

Obama has repeatedly spoken of improving the corporate tax code by closing special loopholes for politically connected companies and using that money to lower the official corporate tax rate. President Ronald Reagan embarked on a similar project in 1986, enabling the federal government to increase tax revenues even as it lowered the formal tax rates. Although corporate tax revenue is at postwar lows, Obama's plan is much less ambitious: He doesn't want to actually increase tax revenues at all. The benefits from closing loopholes would exclusively flow straight to other corporations.

But Obama has given several of the executives who benefit most from the current system prominent economic advisory positions. The Obama administration declined do comment for this story.

Of Obama's corporate favorites, General Electric CEO Jeff Immelt and Honeywell CEO David Cote have served in the highest-profile public positions associated with the administration. Immelt has been pilloried with criticism ever since Obama named him head of his Council on Jobs and Competitiveness. GE required massive amounts of government aid when the subprime mortgage bets made by its financial wing, GE Capital, resulted in enormous losses during the financial crisis. While the company is headquartered in the U.S., a majority of its employees are based abroad (GE is somewhat unique among major companies for disclosing this figure, a fact Immelt has touted in recent speeches), and it has a robust staff of former U.S. Treasury officials who deploy complicated accounting maneuvers to lower the company's tax bills. Immelt made $15.2 million last year, with GE's $3.3 billion tax benefit accounting for more than half of the 10 companies total tax benefit.

Cote has received far less public scrutiny than Immelt, although he may have greater influence over U.S. economic policy. Obama named Cote to a previous super-committee on economic policy, the National Commission on Fiscal Responsibility and Reform, known as the Simpson-Bowles panel. An Obama nominee, Cote was the second-ranking Republican on the Commission, behind former Sen. Alan Simpson. Once derided by liberals as an obsessively conservative approach to cutting the deficit, the Simpson-Bowles panel's recommendations have increasingly been used by congressional Democrats to fend off more radical proposals from Rep. Paul Ryan (R-Wis.) and the Republican leadership. Cote scored $15.2 million in pay last year, while Honeywell secured a $471 million tax benefit. Honeywell told HuffPost that it complied with tax laws and that its executive pay standards are guided by executive performance. The company also said it is proud of Cote's government work.

Ford CEO Allan Mulally, Boeing CEO James McNerny Jr. and Verizon CEO Ivan Seidenberg all served on Obama's Export Council, which the president established in 2010 to help advance his goal of doubling the exports of American products to other countries by 2015. Seidenferd stepped down as Verizon CEO earlier this year, but he is currently chairman of the company. Combined, the three executives secured $58.4 million last year, while their companies scored a combined $767 million federal tax benefit.

Ford notes that its tax bill this year is particularly low relative to its profits due in part to a law allowing companies who post hefty losses to qualify for tax breaks in future years. Ford lost $2.7 billion in 2009 and $6.5 billion in 2010. Mulally was paid $17.9 million and $17.0 million in those years.

Obama has placed other executives on separate economic panels. eBay CEO John Donahoe served on the White House Council for Community Solutions, Qwest Communications CEO Edward Mueller chaired the President's National Security Telecommunications Advisory Committee, Dow Chemical CEO Andrew Liveris is co-chair of Obama's Advanced Manufacturing Partnership and Motorola Solutions CEO Greg Brown was on the President's Management Advisory Board. These four CEOs hauled in a combined $57.2 million last year and received a total tax benefit of $714 million. Qwest was recently acquired by CenturyLink, which distanced itself from Mueller's pay, saying it was set by Qwest's board, not CenturyLink's.

Although Dow Chemical scored robust international profits for 2010, it was the only one of the 10 firms tied to Obama to post a loss on its U.S. operations during the year. Liveris recieved $17.7 million in total compensation.

Of the 10 CEOs, International Paper CEO John Faraci has the loosest tie to Obama. The president invited Faraci to travel with him to Brazil for the signing of a preliminary trade agreement, and Faraci spoke favorably of the deal during the trip.

"It's no surprise that the CEOs that IPS chose to look at are earning more than their corporations paid in taxes in 2010 given how many major corporations pay no taxes at all," said Bob McIntyre, Director of Citizens for Tax Justice, a separate think tank that works exclusively on improving U.S. tax policy. McIntyre is currently working on a separate report that he says has found "dozens" of top corporations who have paid no federal income taxes in recent years.

When asked to comment on the discrepancy between CEO pay and federal income tax bills, the companies emphasized that they complied with federal law on their taxes. Others said the report was unfair, because it does not count the other types of taxes companies pay -- state, local and payroll taxes. Several also noted that their tax bills appear larger if you count "deferred taxes" in the calculation. One of the most prominent ways to defer taxes, however, is to stash money in offshore tax havens such as Panama that do not tax corporations. So long as that money remains abroad, companies never actually have to pay U.S. taxes on it. The hypothetical future taxes that firms would have to pay if they brought the money back is included in the "deferred tax" number that companies report in annual filings. Deferred taxes, in turn, are typically included in corporate calculations for their "effective tax rate."

The IPS report by contrast only looks at actual money companies expected to pay -- or receive -- from the federal government in income taxes for the year. State, local and payroll taxes do not directly effect the federal budget deficit. The formal federal income tax rate for large corporations is 35 percent.

"This report is just the latest piece of evidence -- you've seen a lot of press reports on some very big companies that show they actually pay very low taxes despite the officially high tax rates," Chuck Marr, director of Federal Tax Policy at the Center on Budget and Policy Priorities, told HuffPost. "Think about the gut-wrenching cuts that are going to be made in education, in innovation and research. Those are just going to be worse if we don't address the corporate sector. So, if we're gonna put scientific research on the table, corporate taxes should be right there with it."

PHOTO GALLERY
CEOs Paid More Than Their Companies Paid In Taxes
Download
Calling all HuffPost superfans!
Sign up for membership to become a founding member and help shape HuffPost's next chapter
Join HuffPost 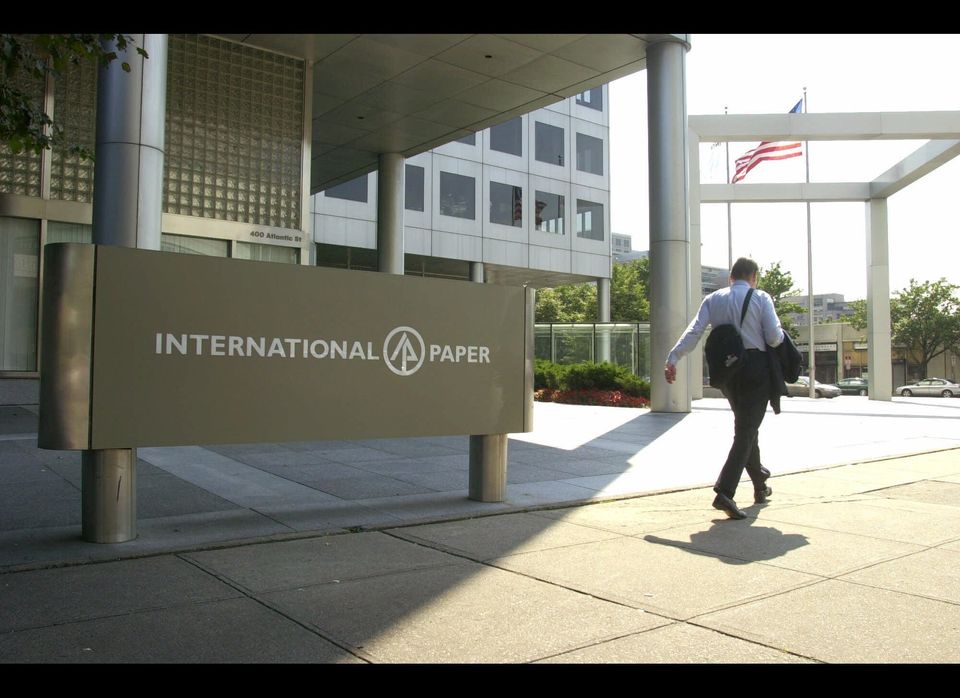 1 / 10
John Faraci, CEO of International Paper
International Paper CEO John Faraci made $12.3 million last year, as his company scored a $249 million federal tax refund despite bringing in $198 million in pre-tax U.S. profits. Obama invited Faraci to travel with him to Brazil this year for the signing of a preliminary trade deal.
AP File