I never joined the first two parts of the gay movement, neither around Stonewall nor AIDS. I was too young for Stonewall and too closeted for AIDS. I watched friends and acquaintances organize, fight and often win, friends such as Howard Bragman (now a powerful publicist), Jeremy Bernard (now a key aide on the Obama team) and Torie Osborn (who created the bridge between lesbians and gay men in building the LA Gay and Lesbian Center in the 1980s).

Having worked pretty hard on the No on 8 side via Courage Campaign, I decided to forego the rally in West Hollywood tonight where the self-appointed leaders of the (failed) campaign would do what they do. I'd heard it all. But when a friend called me to say a large group was marching down Sunset Boulevard near my house toward the CNN building, I ran to join them. They made me feel alive and reconnected to a movement that had disappeared over the last fifteen years.

At first, we were maybe two thousand, walking in rag-tag down one of the busiest streets in the country, right through Hollywood. My friends Zach Shepard and Geoffrey Murry, two young lawyers who have never led a protest in their lives, had led this group away from the official speeches in West Hollywood, speeches Zach said he was bored of hearing. Zach was tired of being "talked to." He and his friends wanted to do something, to be part of something. 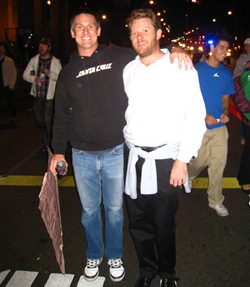 I'm not so used to these spontaneous things myself. In my twenties, I was a VP at Occidental Petroleum. We did not think spontaneous marches were such a good idea because they were usually spontaneously marching at us. But the energy tonight was infectious, a different sort of power from that exultant joy I experienced last night at the huge Century City party for Obama. This electricity was from the Zachs and the Geoffreys who had raised over $75,000 from small donors for the No on 8 campaign, but were never allowed to campaign. As Zach said, " I felt like a cog. Some guy called me after I volunteered, but he could not even tell me when my shift was." Zach never found out.

John Cloud wrote an interesting story in Time Magazine last week about the new gay mafia that is behind lots of the great changes that are going on in American politics. They are smart people who put up hundreds of millions of dollars to change politics and society from the bottom up, working county by county and state by state for equality for gay people. One of the gatekeepers for one of the rich donors is quoted as saying, "where is the outrage?" I think he means where is the outrage against being kept as second class citizens, wondering why the "movement" sits back and waits for billionaires to write checks. But can there be outrage when a movement becomes a corporation? When the largest LGBT organizations look like, are staffed by former executives of and are funded by huge corporations and huge donors, where is the movement?

It's not at black tie dinners. It's not at VIP receptions. It's not on the red carpet. Movements are visceral and popular, often born of outrage and even anger, like that which eventually made Barack Obama president-elect.

The campaign for No on 8 may not be over. Maybe, just maybe, more votes will be counted and we'll win. But in the likelihood that we don't, Zach and Geoffrey and the thousands of people who left a park in West Hollywood tonight tired of speeches, ready to work, ready to build and ready to lead, will be our way to victory.

The Mormon Church and its subsidiary allies brilliantly pumped in money and lies into a cynical campaign to strip rights from people via constitutional amendment. They ran a much better campaign than the No side. And they used their base to win. I talked with two candidates for office here in California today who said they lost because they were on our side. They saw the Mormon Church at work. They saw organizing of Latino and African American households. They saw passion and organization. Where were we?

Next time--and there will be a next time--we must believe in ourselves. That's one of the key messages of the Obama victory. Believe in the people. Empower the people. If you give them orders and you make them cogs, they'll write some checks, but they'll stay home. On election day, it felt good to wave at the people on the street holding No on 8 signs. But I saw no one, not one person, waving a Yes on Obama sign. Why? Because the Obama campaign focused like a laser beam on using California money and labor to win in other states. They had California in the bag. They did not waste people's time doing "visibility" in California.

Shocking as it may seem, we had West Hollywood in the bag. Imagine the thousands and thousands of people who could have called, spoken to five friends, walked and persuaded for the past four months. Imgaine what might have happened had we truly engaged our wonderful friends in the labor movement, such as Sal Rosselli. And then, if we had lost, we'd have a real movement. Now we have to build one from Zach and Geoffrey up. Maybe it's all for the best. As Barack Obama has shown, real victories do not come easy, but they do come from movements.